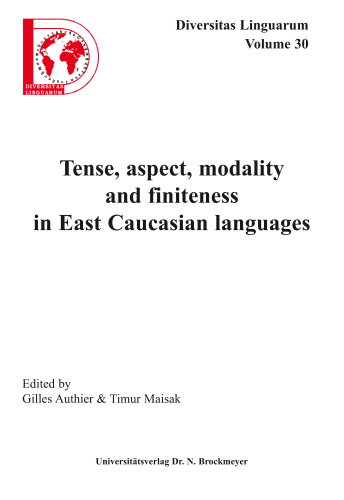 Progressive periphrases in German are analyzed in a quantitative and qualitative way. The subject of the analysis is progressive constructions in the XVII–XIX centuries. It is stated that the process of their formation was not homogeneous, as there were two forms of progressive periphrases during the IX–XV centuries that were existing concurrently and were interchanging. It is determined that in any period the most frequent periphrases are im-construction and am-construction, moreover, the frequency of the latter is increasing. It is confi rmed that the process of grammaticalization mostly referred to contraction of locative prepositions and defi nite articles, which lost their lexical meaning in the development of progressive periphrases.

Grammaticalization is often considered to reflect frequent co-occurrence of certain elements in certain positions. This paper tests the frequency-based account of the grammaticalization of person agreement, comparing the grammaticalization of person agreement in Tabasaran, a Lezgic language, with the syntax of free pronouns in closely related Agul. Our assumption is that the situation in Agul, where person marking is not grammaticalized, approximately reflects a diachronic stage prior to the grammaticalization of person marking in closely related Tabasaran. We find little evidence in support of a frequency-based approach, at least when frequency is treated in terms of global frequencies. We do, however, identify a highly frequent verb that already in Agul appears to regularly associate with the pattern that has generalized to become person agreement in Tabasaran. We suggest specific information structural configurations associated with this verb, which have provided the impetus for the development. More generally, we show that while global measures of frequency may not yield the correct predictions, investigating the syntactic constructions associated with individual lexical items may be more revealing, and provide a more realistic model for reconstructing the paths of syntactic change involving the generalization of existing and quite local patterns.

Distinguishing Logophoric Pronouns And Long-Distance Reflexives in Mehweb Dargwa
Kozhukhar A. A. Linguistics. WP BRP. НИУ ВШЭ, 2015. No. 27.
This study analyses the difference between logophoric pronoun and long-distance reflexive in Mehweb Dargwa of East Caucasian language family. Following paper cites the examples that provide evidence for the difference existing between logophoric pronouns and long-distance reflexives in Mehweb and explains the cases of the reference ambiguity by introducing the idea of the zero pronoun with non-subject reference.
Specialized Converbs in Mehweb
Sheyanova M. Linguistics. WP BRP. НИУ ВШЭ, 2015. No. 31.
This paper classifies the semantic inventory and describes the morphosyntactic characteristics of specialized converbs in Mehweb a lect of the Dargwa group of the East Caucasian (Nakh-Daghestanian) language family. The data for this description were collected during a field trip to the village of Mehweb (Megeb). For Mehweb I describe converbs which have the following meaning: anteriority, immediacy, inceptivity, simultaniety, posteriority, hypothetical conditionality, counterfactuality, concessivity (and another meaning close to concessivity), causality, purpose and graduality.
The Mehweb “assertive” copula gʷa: a sketch of a portrait
Lander Yu. In bk.: The Mehweb language: Essays on phonology, morphology and syntax. Berlin: Language Science Press, 2019. Ch. 12. P. 315-331.

Mehweb Dargwa features a particle gwa, a peculiar element which is basically used for emphasizing the assertion. The paper explores some grammatical characteristics of this particle. It is shown that, in both verbal and non-verbal clauses, gwa serves as a predicative marker forming a complete predication and is an equivalent of a copula (even though, unlike the neutral copula in Mehweb, it lacks inflection). Similarly to typical East Caucasian predicative markers, gwa may occur in different positions, though its place is syntactically constrained (e.g., it cannot be embedded within syntactic islands). Still, Mehweb speakers allow gwa not to be adjoined to either the predicate or the focus. This makes the distribution of the particle surprising as compared with similar predicative markers in well-described East Caucasian languages, where they may either occur on the predicate or immediately follow the focused element.

The book is a yearly almanach on Daghestanian linguistics and philology.

On how compositionality relates to syntactic prototypes and grammaticalization
Lander Yu. In bk.: Donum semanticum: Opera linguistica et logica in honorem Barbarae Partee a discipulis amicisque Rossicis oblata. M.: Languages of Slavic culture, 2015. P. 146-155.
Modifier incorporation in Dargwa nominals
Lander Yu. Linguistics. WP BRP. НИУ ВШЭ, 2014. No. 12/LNG/2014.
In Dargwa languages, which constitute a branch of the Northeast Caucasian language family, certain nominal attributes may be either marked with a dedicated attributive suffix or appear without it. While it is sometimes said that the short form of the modifier serves as a base for deriving the full form, I propose an alternative direction of derivation and present evidence for the idea that unmarked attributes are incorporated into the nominal head.
Grammaticalization and Semantics of Complex Predicates in Kalmyk
Baranova V. V. Journal de la Société Finno-Ougrienne. 2013. Vol. 94. P. 9-35.

The paper describes Kalmyk complex predicates, based on the empirical data of linguistic fieldwork. The focus of this investigation is on the semantics and morphosyntactic properties of the complex predicates in Kalmyk. In Kalmyk, several auxiliaries (bää‑ ‘to be’, jov‑ ‘to go’, kevt‑ ‘to lie’ and suu‑ ‘to sit’) belong to the imperfective domain. Perfective semantics is the basis for complex predicates with the primary verbs ork‑ ‘to put’ and od‑ ‘to go away’, whereas the verbs av‑ ‘to take’ and ög‑ ‘to give’ express reflexive benefactive and benefactive meanings. The verb xaj‑ ‘to throw’ expresses intensivity and pluractionality. The study shows that the Kalmyk aspectual system arose as a result of grammaticalization.