This article examines the political implications of the Biblical exegesis in John Wycliffe and his opponent, John Cunningham.

Tomas Hobbes’ conception of language can not be described in common terms of conventionalism and nominalism. Language plays a very important role in the Hobbes’ thought, therefore, we should pay careful attention to it. What can the language says about distinction between natural and political philosophy? Has the sovereign the power over the language of his subjects? Can we distinguish the language in the commonwealth and the language in the natural state? Searching answers to these questions is important not only in the context of the history of philosophy, but allows us to include Hobbes’ ideas in modern political and philosophical discourse.

In this chapter are presented in fool commented translation two texts advirtising new science of the stars in the XIIth century latin West: the letter to french philosophers by Peter Alphonsi and the anonymous prolog to the translation into latin of Ptolemy's Almagest.

Intellectual activities of Marsilio Ficino proceeded mainly in Florence and its environs completely covers the second half of the 15th century. In his medical-astrological treatise ‘De vita libres tres’ (1489), he considers the origins of melancholy. For Ficino, the sphere of application of exegetic instrumentation was not only Platonic tradition, but also it has absorbed elements of scholastic science, and artifacts of the humanistic manner of the writings, dealing with contingent things. The aim of the paper is describing of the key characteristics of intellectual practices of Ficino in the context of his epoch, 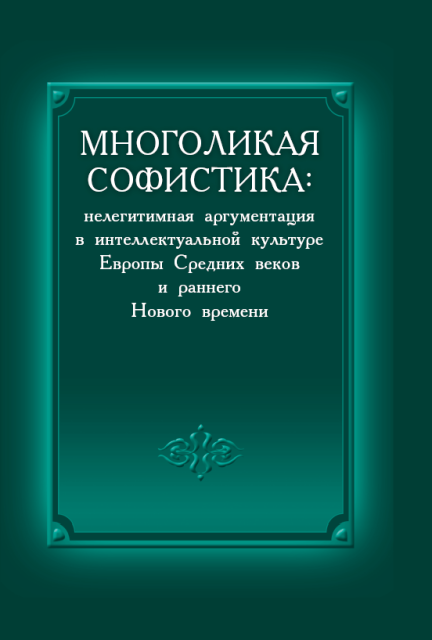 The article is devoted of philosophical views by Leo Tolstoy, we described transitions of ideas from Enlightenment to the philosophy of Life.

The conceptualization of the philosophy of the text requires a preliminary idea about the ways of the textual presentation of philosophy as such. At the same time, philosophical views per se are difficult to classify and systematize — at best, they are arranged by eras and cultural-ethnic factors. In this regard, it seems fruitful and justified not to build various rationalistic constructions but to take an open look at the very existence of philosophizing. From such perspectives, philosophy appears not so much a single, monolithic, and strictly ordered system as a ‘system of systems’ that are interrelated, interconnected, and reminiscent of Ludwig Wittgenstein's ‘family of language games’. Philosophy is a universal, ultimate understanding of the world, society, human beings, and their self-determination in this reality. In this interpretation, being in itself appears as a text. Philosophizing as such is realized in various forms of textualization, which are the focus of this article. Verbal textualization (single words, paremia, aphoristics, parables, detailed plots, hermeneutic interpretations, conceptual systems) does not exclude visual, activity-driven textualizations and their mutual translations. Philosophy is capable of taking on diverse, dissimilar forms. It is as diversified as the paths of human self-determination, self-awareness, self-explanation, and self-justification. Therefore, the claims to exclusiveness and validity of any one way to textualize philosophizing do not seem justified.

The logic of forbidden colours
Dragalina-Chernaya E. Humanities. HUM. Basic Research Programme, 2012. No. 10.
The purpose of this paper is twofold: (1) to clarify Ludwig Wittgenstein’s thesis that colours possess logical structures, focusing on his ‘puzzle proposition’ that “there can be a bluish green but not a reddish green”, (2) to compare model-theoretical and game-theoretical approaches to the colour exclusion problem. What is gained, then, is a new game-theoretical framework for the logic of ‘forbidden’ (e.g., reddish green and bluish yellow) colours. My larger aim is to discuss phenomenological principles of the demarcation of the bounds of logic as formal ontology of abstract objects.
Эссе как форма
Адорно Т. В кн.: Своеволие философии: собрание философских эссе. Издательский дом ЯСК, 2019. С. 65-85.
К дискуссии о генезисе древнегреческой философии
Матвейчев О. А. Научный ежегодник Института философии и права Уральского отделения Российской академии наук. 2016. Т. 16. № 4. С. 5-16.

The article is a historiographical overview of the main concepts of the genesis of ancient Greek philosophy appeared in the XVIII-XX centuries. The author argues that Greek philosophy was not perceived as an independent, peculiar phenomenon until the XVIII century; therefore, the question of the origins and genesis could not be formulated. “Turning to the Greeks” in the history of philosophy comes from D. Tiedemann, the author of “Zeitgeist”concept. Hegel’s philosophical system and the manifestation of the principle of historicism in its most complete form had a huge impact on the subsequent development of philosophical thought. Hegel devotes Greek philosophy special place among other stages of the development of the Absolute Spirit; he argues that ancient Greek philosophy was the beginning of philosophy in its proper sense. E. Zeller radicalized Hegelian idea and entered into controversy with Orientalism, which dominated in the beginning and in the middle of the XIX century. Zeller denied any external influence on early Greek philosophy. Simultaneously, Zeller questioned Hegelian apriorism. In fact, the subsequent history of philosophy was developed in polemics either with Hegel or with Zeller. There are several conflicting approaches to the problem of the origin of ancient Greek philosophy in the historical and philosophical doctrines of the XIX-XX century. Methodologically, Hegel’s and his followers’ apriorism opposed Zeller’s empiricism. J. Burckhardt, W. Windelband, T. Gompertz, H. Diels were close to this empiricism. The discussion between the adherents of mytho-genic concept (F.M. Cornford, A. Weber, G. Thomson) and epistemo-genic concept (W. Windelband, T. Gompertz, J. Burnet, H. Diels) was about continuity between philosophy and previous forms of consciousness. In addition, there were thinkers who attempted to overcome extremes of two positions (W.К.С. Guthrie, J.-P. Vernant). The dispute between supporters of autochthonous hypothesis (F. Hölderlin, Hegel, E. Zeller, J. Burnet) and Oriental hypothesis (F. Schleiermacher, A. Gladish, A. Röth, P. Tannery, U. Hölscher, G.S. Kirk, J.Е. Raven, W.К.С. Guthrie, M.L. West, W. Burkert) was about internal and external sources of early Greek philosophy. In one form or another, the same discussions continue in our time. In order to enter into a genuine, deep essence of contemporary debates, which is not always recognized by the disputants, it is necessary to know well their origins and the context of occurrence Keywords: natural-language-ofdialectical-philosophy; formal-axiological-semantics; evaluation-functional-meaning; evaluation-variable; evaluation-function; compositionality.

Антипсихиатрия: социальная теория и социальная практика
Власова О. А. М.: Издательский дом НИУ ВШЭ, 2014.
Anti-psychiatry, established as a social movement during the rebellious era of the 1960s, formedat the intersection of psychiatry and philosophy, psychology and psychoanalysis, and critical socialtheory and cultural theory. This movement opposed society’s coercion against and enslavement ofindividuals, opposed total authority and public institutions, and struggled for true existence andliberation. Anti-psychiatrists advanced radical slogans, such as ‘mental illness is a myth’ or ‘the madmanis the true revolutionary’, and developed their revolutionary activity. Under the motto ‘Freedomcures’, they destroyed the walls of mental hospitals and organized therapeutic communes andanti-universities. The book, which investigates the origin of this radical wave, the issues it raised, andthe results it produced, is intended for anyone interested in the history of psychiatry and culture,social and critical trends and counter-cultural projects, as well as for specialists in bioethics, history,methodology, scientific epistemology, the sociology of deviance, and philosophical anthropology.