Egyptian women in the Arab Spring: Emotions, Political Participation and the Internet 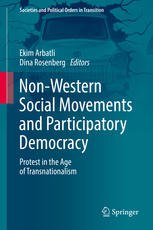 The article describes technological aspects of the human rights protection at the Internet, modern problems and trends, including Web 3.0 concept.

Условия оказания услуги по предоставлению доступа к облачным вычислениям
Жарова А. К. Государство и право. 2012. № 12. С. 86-90.
The article is devoted to civil legal relations related to the provision of services through technologies such as cloud computing. The article answers questions about the classifi cation of objects in the cloud and available to use as well as the classifi cation of the subjects of providing this service. In addition, the article examines the risks associated with the use of cloud computing.
The ‘Arab Spring’: Role of Elites and the Specifics of Society
Salmina A. M.: 2012.

Socio-economic development in the Arab world is an important element of global pattern changes in the early 21st century. They show a complex interaction of processes in the masses of the new young "Internet generations" and the elites, and somewhat forgotten gastarbiters. Matrix of kingdoms and republics, oil and non-oil countries make situation more complex for the region than for any separate country. From our viewpoint the political spring in the Arab world requires, first of all, the analysis of the Arab society, its nature and characteristics that distinguish it from societies of the Christian tradition of Europe and the Americas. And is it revolt of the middle class in one oil country or a rebellion of tribes? The new middle class, the information revolution and the dispossessed masses, including migrant workers in the background of the huge concentration of wealth of the ruling regimes represent the socio-economic reality of the Middle East that will be present in international politics in the next decade. And finally - to what extent the lesson of Lybia can be applicable to other oil countries? What may be lessons for other elites?

The Arab Spring and Islamic Legal Thought
Leonid Sykiainen. Law. LAW. Высшая школа экономики, 2013. No. 17.
At the end of 2010 there was siries of political crises in the Arab world and this period came to be known as "the Arab Spring'". Islam has played its significant role in these events. In certain countries overthowing the existing regimes resulted in Islamic governments coming to power. A number of aspects of the Arab Spring attracted the attention of contemporary Islamic legal thought. Its different schools diverge in the assessment of the mass protests. Islamic jurisprudence explains the "fiqh of revolution" which justifies the demonstrations and protests against the regime from a Sharia-based pount of view.
Public Space in Europe and Russia: ‘Europeanness’ and Re-Interpretation of Urban Public Space
Zhelnina A. A. Working Papers of Centre for German and European Studies. Centre for German and European Studies, 2012. No. WP/2012/07.
Following the protests in Russia in December 2011 and Spring 2012, interest in public space and how it is conceptualized has grown significantly. So too has interest in the existence of public spaces in cities. Before the protests, the term ‘urban public space’ was used rarely by a small number of specialists in urban planning and urban studies, but it did not exist in the public discourse. However, the unprecedented occupation of open spaces in Russian cities by protesters (both in the form of protest rallies and ‘Occupy Wall Street’-like presence in squares and boulevards) has lead to the discussion of the concept itself, and discussion of the limitations on and opportunities for the use of the urban space by city dwellers: the issue of the quality of the urban public life, public gatherings and spaces for them was raised by the media and the citydwellers.
Russia’s Protest Movement and the Lessons of History
Yakovlev A. A. Russian Analytical Digest. 2012. No. 108. P. 6-10.

This volume contains the papers presented at INSCI 2016, the Third International Conference on Internet Science, held on September 12-14, 2016 in Florence. The theme of the conference was "Openness, Collaboration and Collective Action".

When the Revolutionary Wave Comes: Arab Spring and the Role of the European Commission in the Schengen Reform, 2011-2013
Dekalchuk A. A. International Relations. IR. Издательский дом НИУ ВШЭ, 2015. No. WP BRP 23/IR/2015.
By studying the process of reform of the Schengen acquis in 2011-2013 inspired by the Arab Spring and the inflow of migrants to the Mediterranean shores of the European Union, in this paper I seek to show how policy entrepreneurs exploit windows of opportunity that open following an external shock (a notion I use to conceptualise the events of the Arab Spring) in order to fulfill their own preferences, regardless of the substance of the external shock in question. How could it happen that the reform initiated by Italy and France in 2011 to “re-nationalise the Schengen” would in the end turn just the opposite of what they sought to achieve? My research suggests that the major factor which helps explain this is the institutional standing of the European Commission which holds exclusive right of legislative initiative, and the fact that by using its position, the Commission was able to win over the European Parliament to its side by effectively making it into a veto-player in its negotiations with the EU Council, thus trapping the Member States into the “joint decision trap”.