The present monographic research of the group involved in the project “Russian
Literary Canon Formation”, financed by Estonian Science Foundation
(grant 8471), and their supporters is devoted to the Russian literary canon
and the pedagogical practice of the 19th century. The first part of the book contains
chapters about the general history of school textbooks for reading and the
story of the heritage of two authors (Vyazemsky and Fet) in them. The second
part of the book presents chapters on various Russian poets (Batyushkov, Zhukovsky,
Pushkin, Koltsov, Tyutchev, Maikov) whose poems found a firm place
in the reading materials for schools. The chapters of the monograph give an
idea of different aspects of the history of these texts and their reception.
The monograph has two supplements. In the first there is a list of 108 textbooks
and books of reading which are all included in the unique data base
accessible in the Internet (www.ruthenia.ru/canon). The second supplement
offers a list of the most popular authors and their texts included in the textbooks
of the 19th century.
The book is available at www.ruthenia.ru/canon 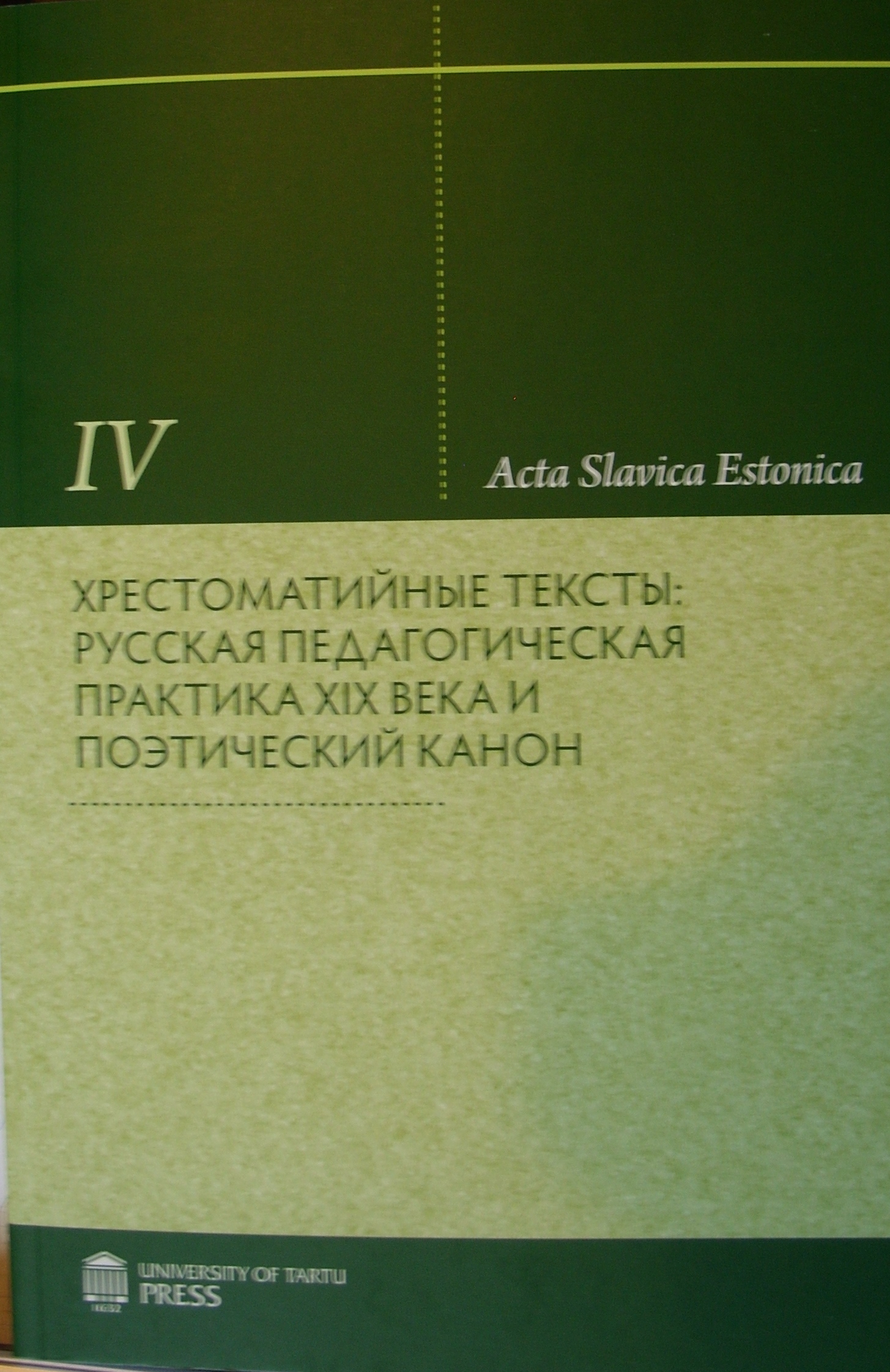 A report on the conference "History of Russian uncensored literature: persones, communities, production of newforms and canons". MSTTU, March 22, 2014

The article presents an overview of poetry books published in Russian in 1913.

The dissertation is devoted to one of the most pressing issues of modern literary criticism — canon formation studies. Until now, most of the scholarly investigations have focused on the anonymous sociological mechanisms of canon formation. The role of another important factor — literary criticism — has not yet been described sufficiently. By ranking writers aesthetically, the critics constructed a synchronic hierarchy that ostensibly had its summit in the person of the “head of literature” («глава литературы»). The process of competition and selection of hierarchies resulted in the emergence of the historical phenomenon understood as literary canon. The thesis explores for the first time the cultural role of Russian literary criticism of the 1830–60s in this process and in the development of the critical concept “head of literature”. Literary polemics from the period under study comprise the research material for the dissertation. This was a time when famous Russian critics V. Belinsky, A. Grigorjev and N. Chernyshevsky proclaimed writers N. Gogol A. Ostrovsky and the critic N. Dobroliubov as “heads of literature”. Since literary criticism in this way tried to guide literature and to plan its future, the concept “head of literature” is discussed as a cultural myth that was formed in the process of nation building upon the foundation of a national literature. The origins of such conception of criticism (the so called “romantische Programmatik”) go back to the ideology of German Romanticism, in particular to F. Schlegel’s ideas, the transfer of which into Russian criticism is also explored in the thesis. An exploration of the wider European context of aesthetic ideas and the historical semantics of pivotal aesthetic concepts such as “genius”, “nationality”, “artistry” has allowed to explain the sources of many of the literary polemics of the 1830–60s. The dissertation offers a new interpretation of the literary debates between Belinsky and Gogol, Belinsky and Shevyrjov (1830s), the critical discussions of A. Ostrovsky’s debut as a playwright (1850–52), and the repercussions of the early death of critic N. Dobroilubov (1861). All these polemics are regarded as a symptom of the critics’ continuous struggle for power in the literary field and for the right to construct a particular literary future. Ultimately, this interdisciplinary approach (based on the intersection of canon formation studies, history of aesthetic concepts, and the historic-functional method) gives us a new picture of the history of Russian literary criticism and literature itself, one that places them in context of the European Romantic thought.

The article is a critical review of the current condition of canon formation studies in Russia in its connection to Pushkin epoch and ‘golden age’ of Russian Literature. Besides, article reviews Pushkin reading which took place at the University of Tartu

Ivan Krylov as a Reader and Krylov's Readers
Lyamina E. Literary Studies. WP BRP. Высшая школа экономики, 2017. No. 25.
The topics explored in this essay include Ivan Andreevich Krylov’s reading practices in his young and mature years, reconstructed on the basis of various sources. The paper recontextualizes Krylov’s unique reading trajectory not always comprehensible for his contemporaries. It also highlights numerous links, not accentuated earlier, between Krylov’s strategies — in life, writing and publishing — and his service as a librarian in the Imperial Public Library of St. Petersburg. The analysis of several situations showing Krylov as a brilliant reciter of his own texts who smartly deals with expectations and obsessions of his audience allows to affirms the existence a special connection, of his personality, considerably mythologized due to his own efforts, the literary genre of fable and the status of classical writer obtained by Krylov by 1830. Sub specie of this connection the transformations of the circle of Krylov’s readers are represented, as well as different ways of perception of his fables by children.
Развитие современного информационного пространства: анализ и перспективы
Дзялошинский И. М., Пильгун М. А., Тощева А. В. и др. Вып. 11. М.: АПК и ППРО, 2012.
Эффективные стратегии и тактики в современных коммуникационных процессах
Edited by: М. А. Пильгун Вып. 10. М.: АПК и ППРО, 2012.
University Students’ Use of Information and Communication Technologies (ICT) in Russia: A Focus on Learning and Everyday Life
Porshnev A., Giest Hartmut. Seminar.net. 2012. Vol. 8. No. 1. P. 27-53.