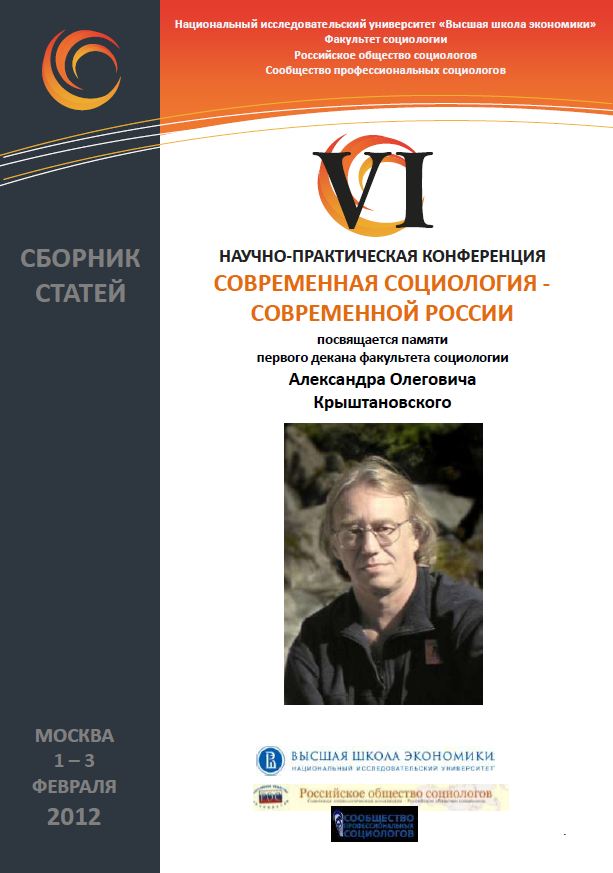 Современная социология — современной России: Сборник статей VI международной научно-практической конференции памяти А.О. Крыштановского
Edited by: А. Б. Гофман, Г. В. Градосельская, И. Ф. Девятко и др. М.: Издательский дом НИУ ВШЭ, 2012.
Similar publications
Nationalism in the USSR: A historical and comparative perspective
Scherbak A. N. Sociology. SOC. Высшая школа экономики, 2013. No. WP BRP 27/SOC/2013.
The late 1980s and early 1990s were characterized by the sudden rise of nationalist movements in almost all Soviet ethnic regions. It is argued that the rise of political nationalism since the late 1980s can be explained by development of cultural nationalism in the previous decades, as an unintended outcome of communist nationalities policy. Soviet political and cultural nationalism is studied in historical and comparative perspective. All ethnic regions are examined throughout entire history of the Soviet Union (49 regions, 1917-91), using the structural equation modeling approach. This paper aims to make at least three contributions in the field. Firstly, it is a methodological contribution for studying nationalism: a ‘quantification of history’ approach. Quantitative values are assigned to historical trends and events. Having constructed variables from historical data, I use conventional statistical methods like SEM. Secondly, this paper contributes to the theoretical debate about the role of cultural autonomy in multiethnic states. The results rethink the notion of ‘cultural autonomy’ as solution of interethnic conflict. Cultural nationalism matters, it indirectly reinforces political nationalism. In both cases concessions in the cultural domain has not stopped the growth of political nationalism in the late 1980-s. Finally, the paper statistically proves that the break between early Soviet and Stalinist nationalities policy explains the entire Soviet nationalities policy. In fact, the late Soviet nationalities policy was inherited from the Stalin’s rule period. This finding revealed in other studies now gets statistical evidence
Are today's young people politically aware? (The analysis of two international academic online forums)
Petrova E. In bk.: EDULEARN12 4th International Conference on Education and New Learning Technologies Publications. Barcelona: International Association of Technology, Education and Development , 2012. P. 223-231.

Basing on N. Kondratiev's theory of long waves, the author describes possible causes of the global financial crisis and notes that we are experiencing a time of "innovation pause. Cloud computing technology could serve as a force of changes, which can give a new impetus to information technologies development.

From traditional to online media: Best practices and perspectives
Wien: The OSCE Representative on Freedom of the Media, 2013.

This is a compilation of all presentations given at the 14th Central Asia Media Confirence, organized by the Representativ’s office, which brought together international and local experts from five Central Asia participating States of the OBSE. This publication is designed to serve as a record of the events of that conference and is intended for journalists, government and regulatory officials and students.

This volume collects the research articles, tool demonstrations, posters, tutorials, and keynote speeches presented at the 13th International Conference on Web Engineering (ICWE 2013). The discipline of Web engineering is a special branch of the broader area of software engineering that specifically focuses on the World Wide Web and the Internet.