Toward refining the theory of basic human values 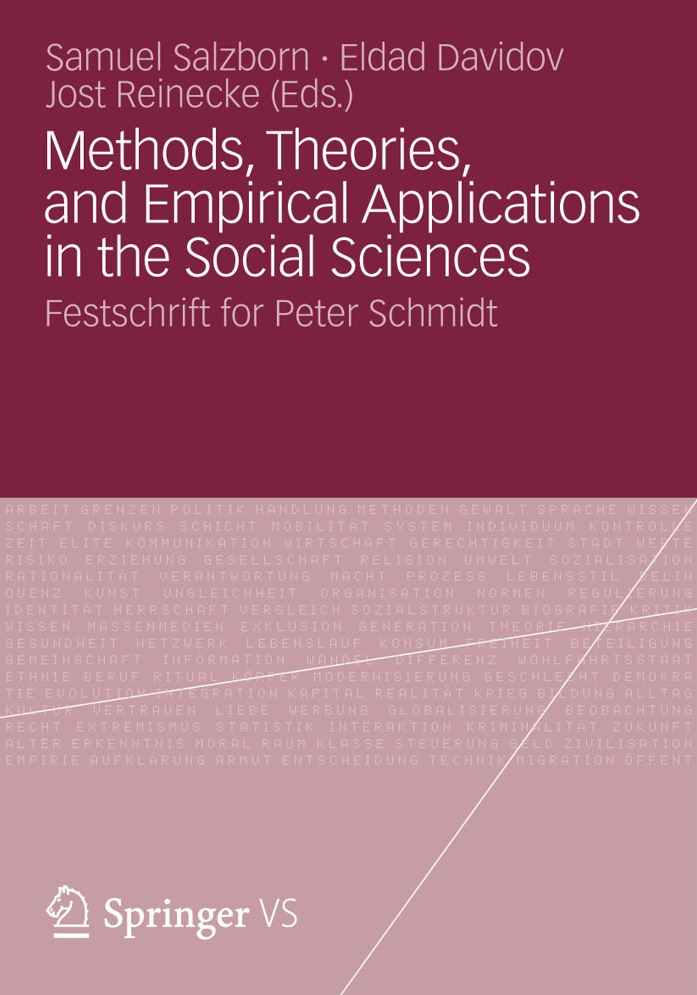 Contents foreword Research on values Chapter 1: Introduction and explanation of the term 'values' Chapter 2: The theory of human values according to Shalom H. Schwartz and its relevance for the study of the development of values in childhood and adolescence Chapter 3: Values and Behaviors The research of value development Chapter 4: How to research values in childhood? A question of diagnostics Chapter 5: How do values evolve? Research designs and results from selected subject areas Chapter 6: Values in the family - conveying values through parenting goals and values Chapter 7: Values development and change of values in children - wishes for research Educational approaches to value formation Chapter 8: Storytelling - Goals and content of a school value building project Chapter 9: Experiencing values - an example of conveying values through experiential project work in the fields of theater and outdoor

Human values, or more precisely values, values ​​and changes of values, have get more and more attention of psychological and sociological research in the past 30 years. Based on entries in the most important literature database of psychology (PSYCINFO), there were on average of 27 scientific publications from 1890 to 1950, which bore the word "value" in the title. Between 1951 and 1980 there were 160 and between 1981 and 2010 the number was 456. Although the emergence of the word "value" in the title of a social science publication does not automatically stand for an engagement with values, value preferences and  change of values. And even so  it has to be taken into account that the total number of psychological publications has risen sharply since 1890, yet the numbers illustrate an increasing interest of social and behavioral sciences in human values. Searching on Google supports this impression.  If you enter "children's values", a Google search results in over 80,000 hits and even the German-language input "Werthaltungen von Kindern" yields more than 600 hits. The current chapter will first provide a cursory overview of the state of social and behavioral science in value research and then turn to the state of this research in relation to children. Above all, the chapter will ask questions and formulate research ideas: What are the fundamental topics of value research related to children and their development? At what age can one say that children have values? Is it changing what children find 'good' in the course of their development? The chapter should not be misunderstood as a review article. A detailed bibliographic relinquishment of the identified research trends is expressly waived. For the most part, the chapter is primarily intended as a collection of ideas.

The present article is devoted to a comparison of today’s values of Russians with those of people living in the other countries of Europe. Many publications have broadly discussed the question of similarities and differences in the cultural and psychological characteristics of Russians and other Europeans, and these discussions represent part of a broader polemic concerning the paths of Russia’s development. New opportunities to make well-founded comparisons between the populations of Russia and other European countries have emerged because of our country’s participation in the European Social Survey (ESS), a largescale international project in which all of the participants have to work in accordance with strict methodological requirements.1 Russia joined this international project in the third round. Surveys in this round have been carried out in twenty-five European countries; they were launched in September 2006 and completed at the beginning of 2007. In Russia the survey took place in September 2006–January 2007, with 2,437 respondents taking part.

Within and Between-Country Value Diversity in Europe: Latent Class Analysis
Magun V., Rudnev M., Schmidt P. Sociology. SOC. Высшая школа экономики, 2012. No. 06/SOC/2012.
Country averages are the most popular instrument for studying cross-national variability of values, and within-country value diversity is rarely taken into consideration in such studies. Furthermore, traditional value indices only measure distinct value priorities, but do not allow researchers to grasp a system of value preferences. In order to find an alternative way to study within-country value diversity and cross-country differences, we employed latent class analysis (LCA). Respondents from the 33 European countries were classified on the basis of their responses to 21 items on the Schwartz Portrait Value Questionnaire. LCA resulted in six value classes. Five of these classes differ by their patterns of value preferences, and the particular feature of the largest class (38%) is the lack of any pronounced value preferences at all. The results showed that each of the 33 countries is internally diverse in its value class composition, and that most countries have representatives of all six value classes. At the same time, Nordic and Western European countries are substantively different from post-Communist and Mediterranean countries by their shares of various value classes. As a formal measure of within-country diversity we have used the value fractionalization index, which measures the evenness of membership distributions between classes. Nordic and Western European countries have higher fractionalization scores than post-Communist and Mediterranean countries. This means that value class distributions are more even in the Nordic and Western countries, which highlights the fact that higher fractionalization scores happen to coincide with country advancement. In Mediterranean and post-Communist countries, low value fractionalization means that the people are divided into unequal value majorities and value minorities, with a risk that the voices of minorities are not heard in the public space.
Factors affecting welfare attitudes in different types of welfare states: personal interests and values
Griaznova O. S. Sociology. SOC. Высшая школа экономики, 2013. No. 18.
This study examines the effect of personal interests and basic human values on the degree of support for a welfare state. Data from the European Social Survey, round 4 (2008) for 29 European countries (total n = 56,752) was used for the study. Results show that values such as collectivism and altruism promote demand for state intervention in welfare, while values like individualism and egoism negatively affect it. Income has the strongest negative effect on support for a welfare state among all the factors tested, even more so than gender and employment status in all types of welfare states. Compared to other countries (familialistic, social-democratic, conservative, and liberal), former USSR and ex-communist countries seem to be more influenced by collectivistic and individualistic values, and education. In addition, in ex-communist countries, altruistic and egoistic values have a crucial impact on the demand for a welfare state. In liberal, conservative, and social-democratic countries, values and education do not have much impact.
The Stability Of The Value Typology Of Europeans: Testing Invariance With Confirmatory Latent Class Analysis
Rudnev M., Magun V., Schmidt P. Sociology. SOC. Высшая школа экономики, 2014. No. 51.
Unlike variable-centered measures, validity and stability of typologies have been rarely  studied. Magun, Rudnev and Schmidt [in review] developed a value typology of the  European population using data from the 4 th round of the European Social Survey. The  value classes showed heuristic power in the comparison of different parts of the European  population, countries in particular, enabling more differentiated interpretations in a  parsimonious way. The current paper tests the stability of this typology by extending the  study to three time points – consecutive surveys in 2008, 2010 and 2012. Conceptually,  this test coincides with measurement invariance testing. We reviewed the levels of  typology measurement invariance. Then, the invariance of the value typology of  Europeans was tested across three rounds of the ESS and it was found to hold configural  and partial invariance. The reliability of the value classes was supported by the stability  of country class probabilities across the time points as well. The correlations of the  country shares of the value classes with the economic development of countries are also  invariant at the three time points. The results imply that the value classification of  Europeans is not ad hoc, but reflects the natural structure of European societies, and can  be used in future studies
The Basic Values of Russian and European Schoolteachers
Griaznova O. S., Magun V. Russian Social Science Review. 2013. Vol. 54. No. 2. P. 42-68.

Basic Human Values of the Russian teachers are compared with those of their colleagues from the 27 European countries, using the Schwartz Value Survey data collected in the 1990s. It was found that the average Russian teacher is extremely high in Security and extremely low in Hedonism. In addition the Russian teachers often leave their colleagues behind in the scores on Self-Enhancement (Achievement and Power) and Conformity-Tradition but often hang back in the commitment to Self-Direction and Self-Transcendence (the latter combines the values of Benevolence and Universalism). The coincidence between relative value scores of the Russian teachers and the conclusions drawn from cross-country comparison of the national samples as well as value similarity between Russia and some other countries of similar level of economic and political development are discussed. The paper illustrates the disparity between research results and common ideological stereotypes.