From Craft to Industry: Industrializing the Marginal Domains of Cultural Industries

For a long time, the basic underlying principle of cultural industries was the idea that the process of reproduction could be industrialized but not the creation itself. Over the course of a few dozers years, this idea determined the nonindustrial character of particular domains of culture, such as theater and performing arts, and some fields of education, maintaining them on the margins of the industrialization process. This chapter examines the complexity of the ongoing mediatization process, which brings such marginal domains into industrial logics, making them reproducible or partly reproducible. We can now see new schemes of the division of labor appearing in performing arts and other fields in which craft-based activity mainly consists of conceptualizing products, while the performances themselves become increasingly industrialized. 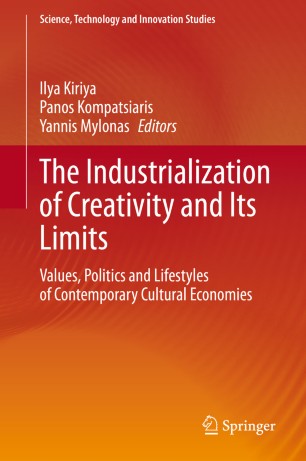 The Industrialization of Creativity and Its Limits: Values, Politics and Lifestyles of Contemporary Cultural Economies
Cham: Springer, 2020.
Similar publications
Regression Tree Model for Analysis of Demand with Heterogeneity and Censorship
Ozhegov E. M., Ozhegova A. Economics/EC. WP BRP. Высшая школа экономики, 2017. No. WP BRP 174/EC/2017.
In this research we analyze new approach for prediction of demand. In the studied market of  performing arts the observed demand is limited by capacity of the house. Then one needs to account for demand censorhip to obtain unbiased estimates of demand funnction parameters. The presence of consumer segments with dierent purposes of going to the theatre and willingness-to-pay for performance and ticket characteristics causes a heterogeneity in theatre demand. We propose an estimator for prediction of demand that accounts for both demand censorhip and preferences heterogeneity. The estimator is based on the idea of classiffication and regression trees and bagging prediction aggregation extended for prediction of censored data. Our algorithm predicts and combines predictions for both discrete and continuous parts of censored data.We show that our estimator performs better in terms of prediction accuracy compared with estimators which accounts either for censorship, or heterogeneity only. The proposed approach is helpful for finding product segments and optimal price setting.
Культурные центры и общественные пространства в период пандемии: стратегии выживания и новые форматы
Гаврилова Н. В. Револьт Pimenov Center, 2020.
Piratages audiovisuels. Les voies souterraines de la mondialisation culturelle
Bahi A. A., Benchenna A., Bullich V. et al. Brux.: INA, De Boeck, 2011.

Luddites is a historical term used to describe a type of artisan, lost their guild status, economic independence and position in the course of the industrial revolution. Perm case allows us to apply the term to a situation of mass introduction of cultural industries in the modern city. In modern society, Gallery is a specialized factory for the production of art. It organizes artistic activity of people of art, develops rules for distinguishing art, creates a center of attraction for artists, their agents and producers. Similar functions are performed by modern theaters, museums, book fairs and exhibition centers.  The paper presents an analysis of resistance practices that the local branch of the Union of Artists of Russia, some writers and journalists met with the development of the project in the Perm Museum of Modern Art PERMM and support program for cultural

|1 (26) 2017|    © Издательство «Эйдос», 2017. Только для личного использования. © Publishing House EIDOS, 2017. For Private Use Only.      Международный журнал исследований культуры International Journal of Cultural Research www.culturalresearch.ru    Содержание / Table of Contents  Тема номера / Topic of the Issue КУЛЬТУРНЫЕ ИНДУСТРИИ / CULTURAL INDUSTRIES   Андрей Николаевич КАБАЦКОВ / Andrey Nikolaevich KABATSKOV | Луддиты в современной культурной индустрии. Пермский кейс / Luddites in Modern Cultural Industry. Perm Case |     82  industries. Displaying the birth of public skirmishes in the press, the ideology of resistance to cultural invasion. The core of the resistance ideology was the idea of the construction of the local territorial identity, spiritual identity and traditions of the mining civilization storage (Ivanov). This allowed the opposition to present a cosmopolitan conflict, businessmen and the keepers of folk traditions. The reason for the defeat of bearers is a disability to mobilize citizens. Relegating them to the role  of spectators, and the power of the initiators of the cultural changes turned them into the crowd of onlookers in no one's own social position. As a result of the defeat of “Perm cultural project” Luddites were able to celebrate a victory (in contrast to their British predecessors), and creative industries were compromised.

The author suggests that the network structure of media markets can be explained by the peculiarities of media industries and media products. Thus, the literature review revealed that media markets can be characterized by a high share of informal relations within the market structure. Such structure allows reduced risks related to the impossibility of demand forecast for cultural goods and the dependency on individual tastes and fashion. The project-based work of many cultural products influences embedded links between actors. The power of personal social contacts is important, however it is not the same for different stages of the production chain for media products, or for different spatial scales of interrelations and in different sectors of media.

In addition, informal relations are valuable for many types of activities — generating creative products, employment and career developing, etc. Structures of interlocking directorates also exist in media industries, however, there is no evidence that media companies are more intertwined than in other industries. Actors in cultural industries can be characterized by small world network configurations that enable more effective creative process, but can block the entrance of new participants and new ideas.

In this introduction we explore how creativity, loosely referring to activities around the visual arts, music, design, film, and performance, is mobilized by states and governments as a “resource” for economic growth. The creative economy discourse emphasizes individuality, innovation, self-fulfillment, career advancement, and the idea of leading exciting lives as remedies to social alienation. Drawing on the chapters in this volume, this introduction questions this discourse, exploring how political shifts and theoretical frameworks related to creative economy in different parts of the world at a time when the creative industries become more and more “industrialized.” We present the interdisciplinary contributions of volume that navigate a variety of geographical contexts, ranging from the United Kingdom, France and Russia to Greece, Argentina, and Italy, and explore issues around art biennials, museums, DIY cultures, technologies, creative writing, copyright laws, ideological formations, craft production, and creative co-ops.

This book is a collection of the most recent research om the Cultural and Creative Industries (CCIs). All of the contributions are written by pioneers within their own fields and all have an international orientation. The book was the basis of discussions at the international research conference in Antwerp that was held on 22-23 May 2014, the third conference on the Cultural and Creative Industries that the University of antwerp, the Antwerp Management School and the HKU University of the Arts Utrecht organized together (Annick Schramme)