State University – Higher School of Economics work is devoted to the study of ethnic intolerance predictors. The research is referred to the cross-cultural relations problem area. In the following article a review of studies in the field will be presented and the methodology of investigation will be described, which is purposed to examine the correlations between values, personality factors and ethnic intolerance 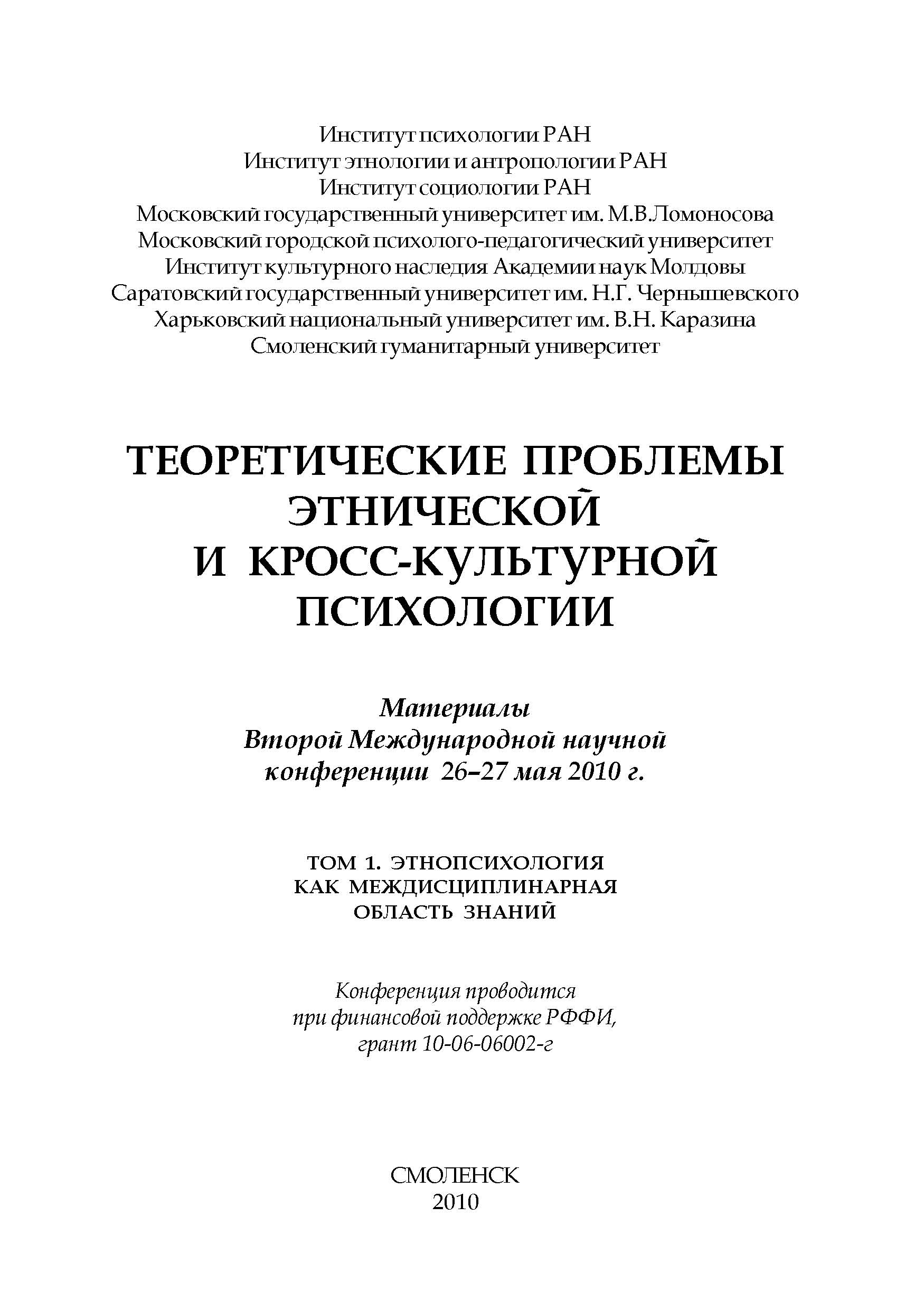 Does Culture Matter? The Impact of Tolerance on Economic Modernization in a Comparative Perspective
Shcherbak A. Sociology. SOC. Высшая школа экономики, 2012. No. 05.
Is tolerance important for modernization? What can one say about the relationship and causality between tolerance and modernization? It is assumed that an increase in tolerance, expressed as a tolerant attitude towards homosexuality, gender equality, and a decrease in xenophobia, has a significant impact on modernization. Here modernization is understood in a ―narrow‖ sense, referring to economic and technological modernization. The author uses the ―cultural modernization‖ approaches of R.Inglehart and the ―creative class‖ concept of R.Florida. Based on data from 55 countries, the author concludes that tolerance does have a significant impact on modernization, with gender equality being the most predictive factor and proving to be important in three groups of compared models (Index of Modernization, Innovation Index, and Investment Index). A tolerant attitude towards homosexuals and a decrease in xenophobia play a less significant role. Gender equality is an important predictor for modernization because women are in the majority – not the minority – and lowering entry barriers for women leads to their inclusion in a post-industrial economy. The results show that this is extremely important for economic modernization. Two distinct patterns of modernization are revealed: A tolerant model and a catching-up model. The former model focuses on innovation, high levels of tolerance, and strong institutions, while the latter focuses on investment, a lower-level of tolerance, and weak political institutions. Institutions do matter – they seem to be a causal mechanism in the relationship between tolerance and modernization. Institutions play a significant role in the tolerant model, where a post-industrial economy is associated with a post-industrial society. However, some countries try to build a post-industrial economy without building a post-industrial society, putting the main emphasis not on innovation, but on higher investment rates.
Обществознание. Глобальный мир в XXI веке. 11 класс. Методическое пособие
Поляков Л. В., Иоффе А. Н. М.: Просвещение, 2008.
Лингвострановедение (французский язык)
Нежина Л. А. М.: АПК и ППРО, 2009.
Culture, Democracy and the Child’s Right to Express his/her Views (Russian perspective)
Kravchuk N. V. Irish Review of Community Economic Development Law and Policy. 2012. Vol. 1. No. 2. P. 63-82.

Базовые ценности-2008: сходства и различия между россиянами и другими европейцами
Руднев М. Г., Магун В. С. Гуманитарные исследования. WP6. Высшая школа экономики, 2010. № WP6/2010/03.
Петр Струве: Великая Россия, или Утопия, так и не ставшая реальностью
Кантор В. К. Вестник Русской христианской гуманитарной академии. 2010. Т. 11. № 4. С. 161-178.
Религиозность и этническая идентичность у представителей различных конфессий
Щербаков А. В. Вестник по педагогике и психологии Южной Сибири. 2014. № 2.
The article considers the perspective of domestic and foreign authors on the problem of religion, religiosity and ethnic identity. The aim of the published research was the revealing of differences in religious attitudes and ethnic identity among representatives of different religions, as well as the relations between the studied parameters. To conduct the study there were formed three groups of men aged 20-30 years in the amount of 92 people, openly expressing their religious beliefs (Muslims - 30 people, Orthodox - 31 people, atheists - 31 people ) and voluntarily agreed to participate in the study. For the diagnosis were used: a worksheet "Religiosity" by A.V. Orlov and a questionnaire " The types of ethnic identity " by H.W. Soldatova. The analysis of the data revealed the characteristic features of religiosity and ethnic identity of the three representatives of various religions (Islam, Orthodoxy, atheism). Moreover, we obtained the evidence that nationalism increases while the religiosity falls among the respondents. Our results can be used as the basis for developing a comprehensive program for the formation and development of religious and ethnic tolerance in terms of contemporary Russian society.
Are Individual Value Orientations Related to Socio-Psychological Capital? A Comparative Analysis Data from Three Ethnic Groups in Russia
Tatarko A. Psychology. PSY. Высшая школа экономики, 2012. No. 03.
This study analyzes the phenomenology of socio-psychological capital viewed as a resource for psychological relations which constitutes the basis for the formation of social capital. A cross-cultural analysis of the impact of value orientations on socio-psychological capital has been performed. Based on a sample of 3 ethnic groups (Russians, n = 103; Chechens, n = 100; Ingush, n = 109), it has been demonstrated that although the impact of individual values on socio-psychological capital obeys logic, it may be culture-specific. Values of Self-Transcendence (Benevolence and Universalism) have a positive impact on the socio-psychological capital of a multicultural society, whereas values of Self-Enhancement influence it negatively. Openness to Change values positively influence civic identity but have a negative effect on perceived social capital. Conservation values positively affect the civic (Russian) identity of the representatives of the Ingush ethnic group.
Обществознание. Человек в глобальном мире. Книга для учителя
Поляков Л. В., Ионин Л. Г. М.: Просвещение, 2009.
Константин Кавелин – невостребованный обществом мыслитель
Кантор В. К. В кн.: Сергей Андреевич Муромцев – председатель первой государственной думы. Политик, ученый, педагог. Орел: Издатель Александр Воробьев, 2010. Гл. 19. С. 168-183.
Природа и сущность духовности
Макатов З. В., Некрасов С. И., Некрасова Н. А. В кн.: Позиция. Философские проблемы науки и техники. Вып. 2. М.; Орел: Издательство ОГУ, 2011. С. 22-30.
Constructing Identities And Boundaries: Fashion And Clothing Of Working And Middle Class Youth In Contemporary Russia
Margarita Kuleva. Humanities. HUM. Basic Research Programme, 2015. No. 85.
Clothing and fashion play significant role in the process of ageing, and help put bodily experiences in the context of culture. It is especially important for young people as social subjects, who are starting to become independent but do not have sufficient experience and social competences to do this.    This paper explores how youth of middle and working class in Russia use clothing to denote their social identity and construct boundaries.The paper is based on materials of 81 IDI with young people from St. Petersburg.
Экономическая активность населения России в 1990-е гг.
Гимпельсон В. Е. Проблемы рынка труда. WP3. Высшая школа экономики, 2002. № 01.
University Students’ Use of Information and Communication Technologies (ICT) in Russia: A Focus on Learning and Everyday Life
Porshnev A., Giest Hartmut. Seminar.net. 2012. Vol. 8. No. 1. P. 27-53.