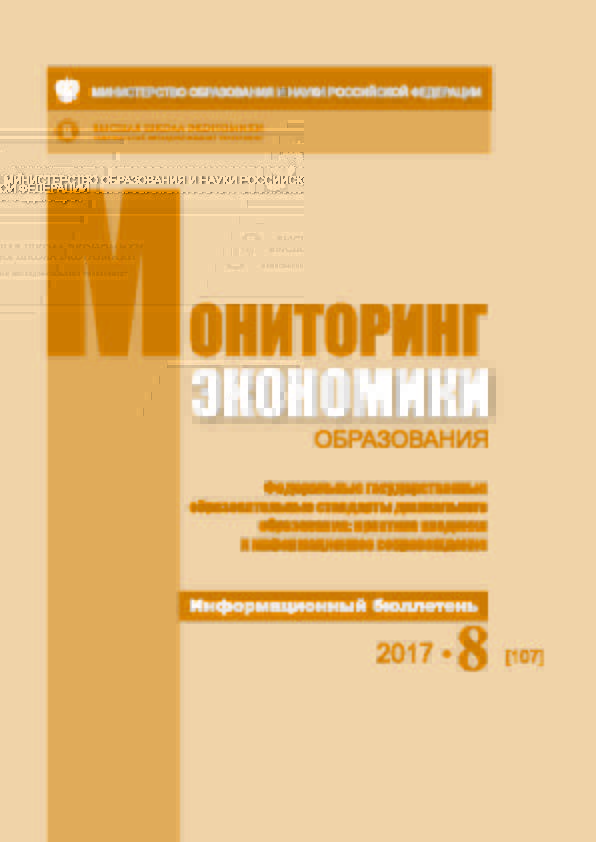 Similar publications
Социально-экономические преобразования и проблемы
Edited by: З. М. Саралиева, А. А. Иудин Вып. 1. Н. Новгород: Издательство НИСОЦ, 2011.
Экономическая активность населения России в 1990-е гг.
Гимпельсон В. Е. Проблемы рынка труда. WP3. Высшая школа экономики, 2002. № 01.
The Parents' Values of Early Childhood Education and Care in Russia: Toward the Construction of Evaluation Tools
Savinskaya O. Education. EDU. Высшая школа экономики, 2015. No. 26/EDU/2015.
This article describes the development of tools for parental evaluation of the quality of services in municipal kindergartens. The parents’ point of view is required as part of a complex evaluation of the quality of educational services in order to make an evidence-based educational policy. We emphasize the importance of a preschool educational institution and its complex role in the implementation of the principles of the welfare state: it has not only an educational, but also a social function, providing governmental support to families with children. This statement is discussed in the literature review which emphasizes the importance of full day educational services. These services allow parents of preschool children to exercise their right to work, as well as perform the socializing role of a kindergarten. Qualitative methodology was used in the research. The empirical base of the study is 30 in-depth interviews with mothers as more involved part of parents. The results show that parents understand the service provided by a kindergarten as a complex, aimed primarily at daytime children’s education and development in a specifically organized educational space, performed by professional educators. The greatest parental value is children’s opportunity to "learn how to communicate", to resolve conflicts and to find compromises, and to relate their behavior with group-mates and peers. The second most important value of education in a kindergarten is the development of life skills, surviving with routines, as well as the associated skill initiative. At the same time, the main professional competence of the educator is seen in their ability to create a positive emotional climate, an atmosphere of openness for the realization of a child’s individuality and to create a space for comfortable communication with parents.
Курсовая работа и диссертация по магистерской программе « Управление человеческими ресурсами»
Свиридова Л. В., Романов В. В. Н. Новгород: Нижегородский государственный технический университет им. Р.Е. Алексеева, 2011.
Образование в сфере публичного управления: компетентностная парадигма
Барабашев А. Г., Масленникова Е. В. Вестник Московского университета. Серия 21: Управление (государство и общество). 2010. № 3. С. 101-130.