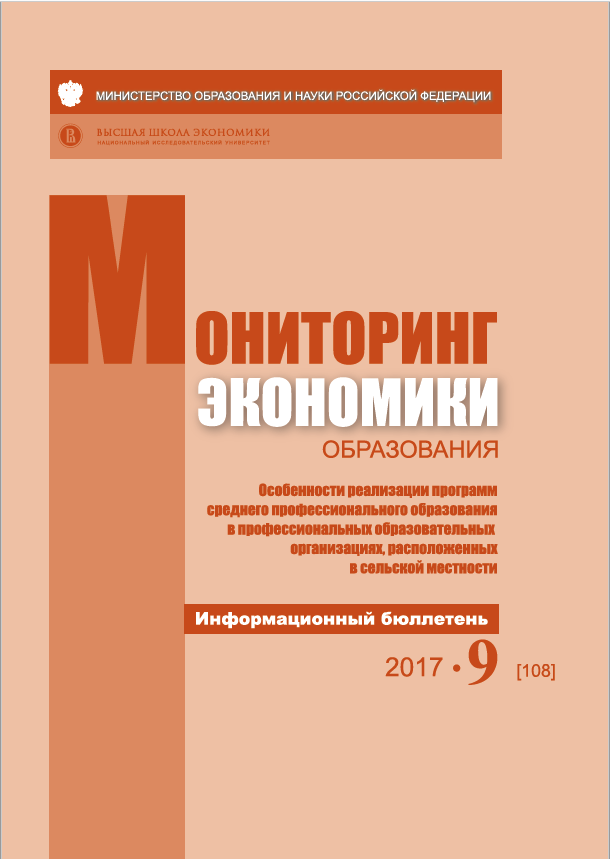 The article is dedicated to the analysis of the connection of socio-demographic characteristics, educational achievements and contextual factors with the educational aspirations of Russian ninth graders. In addition, it examines how students’ aspirations and the level of education of their parents are interconnected. Particular attention is given to issues relating to the dynamics of aspirations depending on different trajectories of education after high school graduation. The analysis is based on data of the panel study “Trajectories in Education and Careers” (TREC: http:// trec.hse.ru/) of HSE Institute of Education.

Safe Mobility: University after Technical College Pathway
Alexandrov D. A., Tenisheva K., Savelyeva S. Education. EDU. Высшая школа экономики, 2015. No. WP BRP 27/EDU/2015 .
This paper presents the professional college system as a social mobility channel providing maximum benefit with minimum risk. The analysis of institutional features and changes forming this channel in Russia in the last 15 years has been conducted. An institutional context for the emergence of a social group using “university after the college” pathway is described. Group members take an intermediate position between students reproducing a professional worker status and students reproducing a highly qualified professional status. They also have average school results. An analysis of parents’ and students’ perceptions of the motives of the choice, benefits, costs, and risks of the educational pathway demonstrates the importance of local context. An alternative educational pathway is less typical for the rural population because of structural constraints; compared to metropolises, in rural areas this choice is typical for higher status groups. A comparison of technical college systems in different countries confirmed that technical colleges in Germany provide social reproduction whereas in Russia and the USA, they operate as a channel of upward social mobility.
Федеральный закон № 83-ФЗ и особенности его реализации в учреждениях профессионального образования
Рудник Б. Л. Профессиональное образование в современном мире. 2011. № 3. С. 41-47.

There is being carried out in the country a reform of the sector of public and municipal institutions which involves the transition to three main types of institutions: state-owned (public), independent (autonomous) and budget-funded. This reform is realized in accordance with the Federal law N o 83-FZ “On amendments to certain legislative acts of the Russian Federation in view of improvement of the legal status of public (municipal) institutions”. The article considers the main provisions of the reform and the peculiarities of its implementation in the professional education institutions.

This paper analyzes the role of education in economic growth with special focus on countries with high participation in tertiary education. The practical challenge that this conceptual paper is trying to address is that global economic growth is decreasing in the last decades – especially in developed countries.

This paper discusses the career and migration opportunities for students in rural areas in both Russia and China as well as the expectations of their parents and draws a comparison. A concept model was developed within the research  framework on the basis of family characteristics, environment characteristics and education.