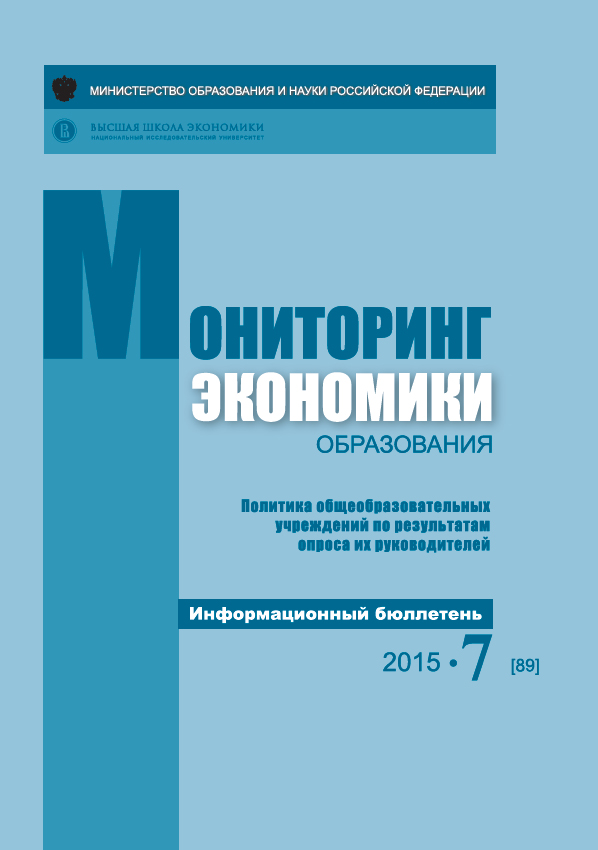 Collection of reports made at the session of the section «Methods of teaching of art Pushkin» of the International scientific conference «A.S. Pushkin and world culture». It consisted of scientific communications (E.S. Abelyuk, etc.), methodological developments (S.V. Ivanova, etc.), description of principles of the lesson (I.I. Shelapina, etc.).

Российская статистика образования: актуальные проблемы и направления модернизации
Гохберг Л. М., Ковалева Н. В., Соколов А. В. Вопросы статистики. 2002. № 2. С. 41-48.
Towards the Panopticon: School Building and Discipline in Early Modern Russia
Fedyukin I. Humanities. HUM. Basic Research Programme, 2016
This article explores the notion of discipline in Russia since the late 17th century and up to the accession of Catherine II. Discipline and disciplining occupy a central place in our thinking about early modern state, and the reconstruction of debates about school building helps to illuminate the ways in which this notion has been articulated. The article traces the emerging concern with using the school building as an instrument of confinement and surveillance, and demonstrates unexpected links between the Noble Cadet Corps in St Petersburg and Bentham's «Panopticn» via the Ecole Militaire in Paris. It argues that the peculiarly modern understanding of discipline was rooted in specific religious sensibilities that had not been developed in seventeenth-century Orthodox thinking. Rather, it stresses the central role of Pietism and the Pietists in introducing these notions in post-Petrine Russia, as well as the ways in which these notions have been appropriated, «domesticated,» and «secularized» by a variety of Russian palters.  At the end, the article reflects on the relationship between discipline, religious sensibilities, was, and the estate in a non-Western early modern context.
Управление изменениями. Третьи Сабуровские чтения: тезисы докладов
Edited by: Л. Вахитова М.: Логос, 2013.

The book contains abstracts of papers presented at the Third Saburov reading. Most of them develop ideas and topics specifically related to the life and works of Eugene F. Saburov (1946-2009) - statesman, reformer, a prominent organizer of education, writer and poet. Like the preceding Saburov readings, in a statement reflected the problems of innovation and reform in the Russian society. A prominent place is given to the results and prospects of the reform of education are analyzed its regional aspects, financial and economic mechanisms.

Where is a Teacher Happy in Russia? Indicators of Teachers’ Salaries
Derkachev P. Public Administration. PA. Высшая школа экономики, 2015. No. WP BRP 28/PA/2015.
This article considers the uneven positions of school teachers in different regions of the Russian Federation. There exist numerous research works on the relation of school teachers’ salaries to the characteristics of regional educational systems and regional economies. A range of indicators is used to calculate school teachers’ salaries. It is necessary to consider the ratio of the teachers’ salary to the average salary in the region, the latter serving as a target indicator in government programs, in combination with other indicators, such as the ratio of the salary to the price of a fixed set of goods and services and the ratio of the teachers’ salary fund to total regional government expenditures. Research based on cluster data analysis statistical methods allowed the author to distinguish four types of regions. We used official data provided by Russian Federal State Statistics Service and the Russian Federal Treasury. The recommendations developed for each cluster of regions seek to improve the efficiency of the steps aimed at the implementation of the educational policy tasks through differentiating the support measures by the federal government
Статистика образования: принципы модернизации
Гохберг Л. М., Ковалева Н. В. Высшее образование в России. 2002. № 2. С. 21-27.
Современное образование как драма идей: материалы Первых Сабуровских чтений (25 февраля 2010 г., Москва)
Edited by: Ю. Гукова М.: Федеральный институт развития образования, 2010.
Schools are segregated by educational outcomes in the digital space
Smirnov I. arxiv.org. Computer Science. Cornell University, 2018
The Internet provides students with a unique opportunity to connect and maintain social ties with peers from other schools, irrespective of how far they are from each other. However, little is known about the real structure of such online relationships. In this paper, we investigate the structure of interschool friendship on a popular social networking site. We use data from 36,951 students from 590 schools of a large European city. We find that the probability of a friendship tie between students from neighboring schools is high and that it decreases with the distance between schools following the power law. We also find that students are more likely to be connected if the educational outcomes of their schools are similar. We show that this fact is not a consequence of residential segregation. While high- and low-performing schools are evenly distributed across the city, this is not the case for the digital space, where schools turn out to be segregated by educational outcomes. There is no significant correlation between the educational outcomes of a school and its geographical neighbors; however, there is a strong correlation between the educational outcomes of a school and its digital neighbors. These results challenge the common assumption that the Internet is a borderless space, and may have important implications for the understanding of educational inequality in the digital age.
University Students’ Use of Information and Communication Technologies (ICT) in Russia: A Focus on Learning and Everyday Life
Porshnev A., Giest Hartmut. Seminar.net. 2012. Vol. 8. No. 1. P. 27-53.