--
--
--
HSE Researchers Find Out How to Communicate Health Information More Effectively to Fight COVID-19
Focusing on mortality from the COVID-19 virus is no more effective than calls to wear masks and save lives, but it significantly increases people's anxiety. After conducting an experiment with over 15,000 respondents from 84 countries, an international group of researchers, including scientists from HSE, came to this conclusion. The results of the study have been published in the Affective Science journal.
Igor Agamirzian: 'Multidisciplinarity is Our Strength'
Keeping up with rapidly changing technology requires accelerated digital transformation in various spheres of the economy and science, as well as a broader application of machine learning and artificial intelligence. Technological advancement also requires conceptualisation and relevant legal regulation. The HSE News Service interviewed HSE Vice President Professor Igor Agamirzian, Academic Supervisor of the strategic project 'Digital Transformation: Technologies, Effects, Efficiency', about ongoing research into digitalisation and its outcomes.
'An Entrepreneur Has to Be Passionate About Their Business'
The results of the Russian part of the Global University Entrepreneurial Spirit Students' Survey (GUESSS 2021) have been published. It found that Russian students show interest in entrepreneurship more often and think about starting their own business five years after graduation. Galina Shirokova, Professor at the School of Economics and Management, Director of the Centre for Strategic Entrepreneurship, told us about other trends in the sphere of entrepreneurship.
--

This edition consists of two parts.

The first part includes the monograph Ancient Japan: Culture and Text. In this study  Meshcheryakov made an attempt to present the main types of written forms of creativity in ancient Japan (history, poetry, prose, religious writings) as components of a single informational text flow. This is the first attempt of this kind made in the domestic Japanese studies.

The chronological framework covers the period from the 8th to the 13th century, that is, from the bottom of the appearance of Japanese literature, framed by the creation of mythological, chronicle and legislative vaults, to the decline of aristocracy, accompanied by the displacement of the center of power from the imperial palace to the shogun's headquarters.

The second part consists of literary translations of old Japanese prose, made by A. N. Meshcheryakov. This includes such famous monuments as Japanese legends about miracles (selected Buddhist legends from Nihon Ryoiki, Ojo Gokurakki and Hokke Kenki), diary by famous writer Murasaki Shikibu (11th  century) and Notes on the leisure time of a Buddhist monk Yoshida Kaneyoshi (14th century).

The publication uniquely combines the publication of outstanding monuments of old-Japanese prose with an attempt to study and comprehend them and will be useful to anyone interested in traditional Japanese culture. 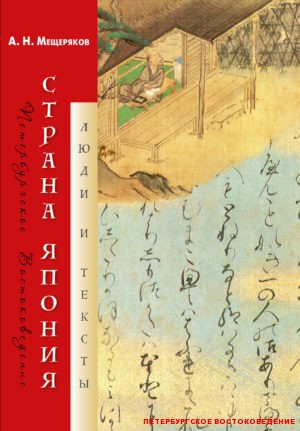