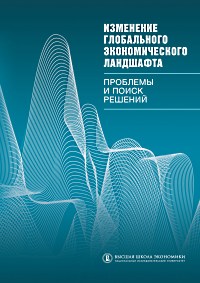 Изменение глобального экономического ландшафта: проблемы и поиск решений
Edited by: Е. С. Хесин, И. Г. Ковалев М.: Издательский дом НИУ ВШЭ, 2011.
Similar publications
Origins of Globalization
Grinin L. E., Korotayev A. In bk.: Globalistics and Globalization Studies: Theories, Research & Teaching. Volgograd: Uchitel, 2013. P. 8-35.
In this article we analyze processes and scales of global integration in historical perspective, starting with the Agrarian Revolution. We connect the main phases of historical globalization with the processes of the development of the Afroeurasian world-system. In the framework of the Afroeurasian worldsystem the integration began several millennia BCE. In it the continental and supracontinental links became so developed long before the Great Geographic Discoveries and thus they could well be denoted as global (albeit in a somehow limited sense). Among some researchers there is still a tendency to underestimate the scale of those links in the pre-Industrial era; thus, it appeared necessary to provide additional empirical support for our statement. It also turned necessary to apply a special methodology (which necessitated the use of the world-system approach). We analyze some versions of periodization of globalization history. We also propose our own periodization of the globalization history basing on the growth of the scale of intersocietal links as an indicator of the level of globalization development.
The Role of Innovation and Globalization Strategies in Post-Crisis Recovery
Golikova V., Kuznetsov B. Basic research program. WP BRP. National Research University Higher School of Economics, 2016. No. 123/EC/2016.
The aim of the research is to conduct an empirical investigation and reveal what types of globalization and innovation strategies in turbulent and unfavorable regional institutional environment are most likely to be associated with different trajectories of Russian manufacturing firms’ performance in 2007-2012. We employ the results of empirical survey of 1000 medium and large enterprises in manufacturing (2009) linked to financial data from Amadeus database and the data on the regional institutional environment. We test that (1) introduction of innovations before the crisis ceteris paribus helped the firms to successfully pass the crisis and recover. We expect that (2) companies that became globalized before the crisis (via importing of intermediate and capital goods; exporting; FDI; establishment of partner linkages with foreign firms) ceteris paribus are more likely to successfully pass the crisis and grow. And (3) propose the positive effect of synergy of innovation efforts and globalization strategy of the firm. We expect that the abovementioned factors are complimentary and reinforce the ability of the firm to recover after crisis shock. We found strong support for the hypothesis that firms financing introduction of new products before the crisis and simultaneously managed to promote and sell them on the global market were rewarded by quick return to the growing path after global crisis. Other strategies, i.e. solely innovations without exporting play insignificant role while exporting without attempts to introduce new products contribute even negatively to post-crisis recover. Institutional environment also matters: in the regions with less level of corruption firms were more likely to grow after the crisis.
Educational tourism as technology of university education: experience of one project in Russia and the USA (philosophic notes)
Shalaeva A. In bk.: World universities congress proceedings. Ankara: Pozitif Printing, 2010. P. 296-299.