Creation of the Common Innovation Area for Commonwealth of Independent States

Stimulation of innovation is a priority and a key factor for sustainable economic growth for the leading world economics during the last decade. Innovation became a dominant factor of social and economic evolvement that demands cutting of the period of innovation cycle; strengthening the impact of science on social and economic sphere; significance enhancement of non-economic factors; enlargement of public and corporative expenditures on research, technological and innovation development; globalization and integration of trans-national innovation processes. Global financial and economic crisis and its consequences brought to a head the necessity to speed up innovation at the level of companies, economic segments and national economics as a whole. In this respect development of integration processes and creation of common innovation strategies for grouping of states such as the EU and CIS, as well as for independent governments and companies becomes the crucial approach to enhance their competitiveness in the world economic area. The decision on development of Intergovernmental Target Programme for Innovation Cooperation of Commonwealth Independent States until 2020 was made by the Heads of the CIS Governments on November 14, 2008. The paper sets to analyze the document’s main goals and objectives, its content, the process of its development and possible implementation paths. 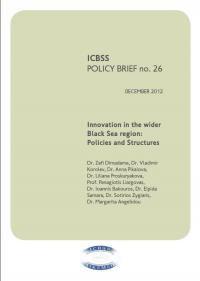