A simple sociophysical model is proposed to describe the transition between a chaotic and a coherent state of a microblogging social network. The model is based on the equations of evolution of the order parameter, the conjugated field, and the control parameter. The self-consistent evolution of the networks is presented by equations in which the correlation function between the incoming information and the subsequent change of the number of microposts plays the role of the order parameter; the conjugate field is equal to the existing information; and the control parameter is given by the number of strategically oriented users. Analysis of the adiabatic approximation shows that the second-order phase transition, which means following a definite strategy by the network users, occurs when their initial number exceeds a critical value equal to the geometric mean of the total and critical number of users. 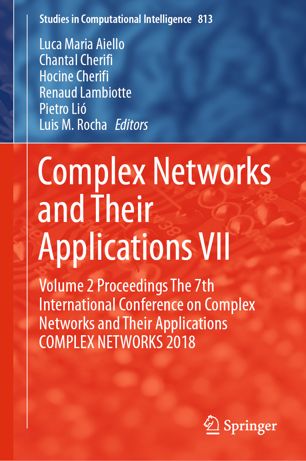 How social ties affect peer-group effects: a case of university students
Poldin O. V., Valeeva D., Yudkevich M. M. Sociology. SOC. Высшая школа экономики, 2013. No. 15/SOC/2013.
Among the key issues of peer effects estimation is the correct identification of relevant peers. In this study, we explore how the individual performance of university students is influenced by characteristics and achievements of peers from individual’s social network. The analysis uses data from two directed networks: a network of friends and a network of study partners for third-year students at a top-tier Russian university. Data on network ties in randomly formed student groups enables us to address the endogeneity problem and disentangle the influence of peers’ performance from the effect that a peer’s background has on students. We show that both the GPA of peers and their ability measures are significant in the estimated regression model. A one-point increase in the average GPA of peers is associated with an increase in an individual student’s own GPA of approximately one fourth. The regression on the data from the network of study partners has slightly greater explanatory power than the analysis based on data from the network of friends. No effect from a student’s classmates is found in the model that assumes group interactions occur between group mates.
State and Legal Practice in the Caucasus. Anthropological Perspectives on Law and Politics
Edited by: S. Voell, I. Kaliszewska. Ashgate, 2015.

Islands of stability in motif distributions of random networks, accepted to Physical Review Letters
Tamm M., Avetisov V. A., Shkarin A. et al. arxiv.org. 1307. arxiv.org, 2013. No. 1307.0113 .
We consider non-directed Erdos-Renyi random networks subject to a dynamics conserving the vertex degrees and study numerically and analytically the equilibrium three-vertex motif distributions in the presence of the external field coupled with one of the motifs. For small values of external fields the numerical data is well described by a chemical kinetics based on the law of mass actions for the concentrations of motifs. For larger external fields a transition into a state with some trapped motif distribution occurs. We present the description of this transition in terms of a phenomenological Landau--type theory with non-zero cubic term, and explain it by employing the notion of the entropy of the motif distribution. We argue that the localization transition should always occur if the entropy function is non-convex, and conjecture that this phenomenon may be the reason for motifs' pattern formation in real networks.
Social Networks and the Economics of Sports
Springer, 2014.