The book describes the concepts of chaos and order in the "hard" and "soft" sciences.

The article describes chaos in the artistic world of Adalbert Stifter as some kind of shadow of the order. Coming nearer to each other, the structures of chaos and order lead to some enrichment of the human nature.

The authors propose new approach to self-organization of complex distributed systems in logistics. That approach is based on combination of multi-agent paradigm with constraint satisfaction techniques. The proposed solution expresses major features of Swarm Intelligence approach and replaces traditional stochastic adaptation of the swarm of the autonomous agents by constraint-driven adaptation. 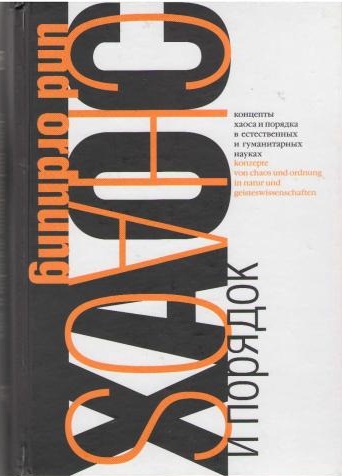 Similar publications
Язык как система ориентиров в социальном пространстве
Никитина Е. Б. В кн.: Информационно-коммуникационное пространство и человек (Материалы II международной научно-практической конференции 15-16 апреля 2012 г.). Пенза; М.; Витебск: Научно-издательский центр "Социосфера", 2012. С. 32-36.
The following article is an account of the author’s opinion of the role of language within the framework of society. The paramount idea is that language should not be viewed simply as a means of communication. The author suggests a more profound understanding of language as a medium between society and the culture against the background of which it manifests itself. The aforementioned conception of language provides the author with the opportunity to assert that language constitutes a system of guidelines without which society would lose its identity.
Материалы XX Международной конференции памяти проф. Л.Н. Когана "Культура, личность, общество в современном мире: методология, опыт эмпирического исследования"
Edited by: А. В. Меренков, Е. В. Грунт, Н. Л. Антонова Екатеринбург: Уральский федеральный университет им. первого Президента России Б.Н. Ельцина, 2017.
Translator and Language Change: On J.R.R. Tolkien’s Translation of "Sir Gawain and the Green Knight"
Volkonskaya M. A. Literary Studies. WP BRP. Высшая школа экономики, 2015. No. WP BRP 10/LS/2015 .
Sir Gawain and the Green Knight, an English poem written in the latter half of the 14th century, constitutes an important part of Tolkien’s life as a scholar and translator. The complex language of the poem attracted his attention from the moment Tolkien first encountered it as the Gawain-poet used some native words that were characteristic of Old and Middle English alliterative poetry. On the other hand, more than one third of his vocabulary is not derived from Old English: approximately one tenth of a total of 2650 words has Scandinavian etymologies (although at the time they were no longer considered borrowings, but rather northern dialect words) and about a third is of French origin. In his translation of the poem, Tolkien was primarily interested in special verse words, which resulted in his use of archaic diction such as capadoce ‘a short cape’ or carl ‘man’. However, this study focuses on the second important feature of the vocabulary of the poem: the combination of French and dialect (Scandinavian) words, which are not distributed evenly in the original text. As the author uses the stylistic contrasts between borrowed and native words; he carefully loads some of his lines with French loanwords while others are devoid of them. This paper discusses the stylistic effect thus created by the Gawain-poet and whether Tolkien managed to preserve it in his translation
Б.И. Пуришев - ученый и педагог
Edited by: В. Ганин, М. Никола М.: Издательство МГОУ, 2013.
Роль предыдущих знаний в порождении эффекта понятийной гибкости
Котов А. А., Дагаев Н. И. Психологические исследования: электронный научный журнал. 2013. Т. 6. № 29.

The choice of interpretation as a problem of social epistemology
Porus V. N. Humanities. HUM. Basic Research Programme, 2013. No. 19/HUM/2013.
Social epistemology is a set of attempts to assign a philosophical meaning to sociological studies of cognitive processes within their social context. These attempts are being made through competition of philosophical interpretations. The choice of interpretation is governed by the desire to bring value orientations of science in line with the challenges from a changing cultural-historical environment. Robert Merton’s “normative ethos of scientists” is reviewed here as an illustration to this thesis.
Does Poverty Research in Russia Follow the Scientific Method?
Lokshin M. Policy Research Working Paper. WPS. World Bank Group, 2008. No. 4528.
This paper presents the first critical review of literature on poverty published in Russia between 1992 and 2006. Using a dataset of about 250 publications in Russian scientific journals, the authors assess whether the poverty research in Russia satisfies the general criteria of a scientific publication and if such studies could provide reliable guidance to the Russian government as it maps out its anti-poverty policies. The findings indicate that only a small proportion of papers on poverty published in Russia in 1992-2006 follow the universally-recognized principles of the scientific method. The utility of policy advice based on such research is questionable. The authors also suggest steps that could, in their view, improve the quality of poverty research in Russia.
Ритуалы в медиатизированном обществе
Черных А. И. Политическая теория и политический анализ. WP14. Высшая школа экономики, 2012. № 03.
Социальный капитал и экономические представления российских и китайских студентов
Татарко А. Н. Психология образования в поликультурном пространстве. 2012. Т. 17. № 1. С. 47-55.
Культура русской диаспоры: эмиграция и мифы. Сборник статей
Таллинн: Таллинн, 2012.
Императорская Россия
Анисимов Е. В. СПб.: Питер, 2008.
In Search of the New "Turns": History and Theory in the 21 st century
Savelieva I. M. Humanities. HUM. Basic Research Programme, 2011. No. 02.
This study researches some of the most recent theories (elaborated by historians and social scientists) applied to the practice of historical research. The object of this research includes ideas, concepts, notions, methods of scholarly analysis of past social reality, as well as the emergence of new interdisciplinary fields, mutual borrowings and interventions. In this connection, the opposite process — the historization of some very disparate disciplinary discourses — is briefly addressed. It includes especially historical aspects of anthropology and sociology in the coming century. The research is based on information from journals specialized in history and theory, on leading history journals which demonstrate the state of art in various research areas, on sociological journals publishing material on historical sociology and on monographs from 1995—2010.
Proceedings of the Seventh conference on International Language Resources and Evaluation (LREC'10), Valletta, Malta, 17-23 May 2010
Valletta: ELRA, 2010.
Персонифицированная легитимность.
Скиперских А. В. Свободная мысль. 2005. № 8. С. 119-203.
Виртуальные расширения человека: новые основы культуры и бизнеса
Черных А. И. Политическая теория и политический анализ. WP14. Высшая школа экономики, 2012. № 04.
Экфрастический дискурс в романе Трейси Шевалье "Девушка с жемчужной сережкой
Тулякова И. И., Бочкарева Н. С. Мировая литература в контексте культуры. 2008. № 3(1). С. 150-154.