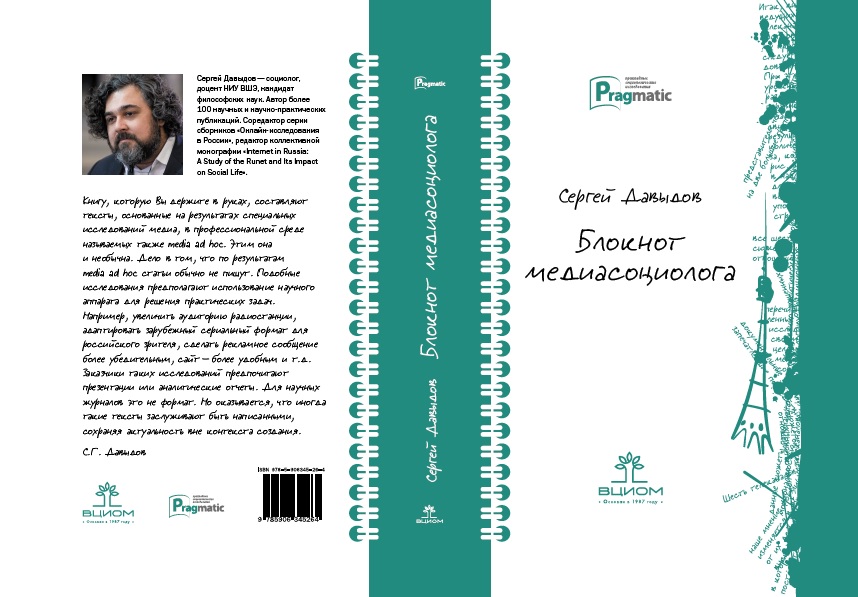 The Chapter is devoted to the forms of communication in Imperial Russia, the speed of dissemination of knowledge and news, the social history of public thought of the XIX-early XX centuries.

This article uses case studies of visual art installations to elaborate an alternative view of the way art is experienced by museum and gallery visitors. In particular, it is argued that the orthodox and influential decoding perspective in the sociology of art overlooks the situated and experiential nature of art, especially when art takes the form of installations. In order to study experiences of art installations, this article draws on recent developments in cultural sociology and the sociology of music to reintroduce the idea of mediation into thinking about and with art. A focus on processes of mediation allows me to address the communications and interactions which emerged at the particular art installation under consideration here, a piece called PharmaConcert by Evgeniy Chertoplyasov that was displayed at the Winzavod Art Centre in Moscow in 2011. Detailed analysis of the forms of interactions at this exhibition shows that as audience members perceive artworks, they transform abstract expectations of artworks into a series of specific and situated actions. Simultaneously, other mediation processes reassemble the audiences through shared experience of contested meanings of an artwork. The paper challenges the orthodox sociological notion of what an ‘audience’ is and instead sees audiences as an emerging form of communication and interaction specific to a particular artwork / installation.

The paper deals with the theory of collective trauma, which is built within the framework of the “strong program” in cultural sociology by Jeffrey Alexander. The theory highlights the importance of the trauma in the shaping of contemporary Western collective identities. The central message of the theory is the avoidance of the “naturalism fallacy”, i.e. of such a vision of the trauma, which doesn’t differ seriously the fact of collective perception from the objective event. Following Alexander, sociologically valid way to explain collective trauma should focus on the symbolic mechanisms of the creating trauma, and is driven by such a notions as code, master narrative, drama, ritual, etc. The power of developed explanation is illustrated by numerous historical cases.

The 13th Siberian conference SIBCON-2017, the oldest conference of IEEE in Siberia, aims to offer opportunities to learn and to share information on the latest advances in communications, electron devices, and control systems.

Is Opera Attendance Fashionable? The Case of Perm Opera and Ballet Theatre
Papushina I. O. Humanities. HUM. Basic Research Programme, 2015. No. WP BRP 107/HUM/2015 .
This paper considers fashion as a factor of theatre attendance. The research setting is the industrial city Perm with approximately one million citizens. Perm opera and ballet theatre found in 1870 is “Russia’s third ballet Mecca, after Moscow and St. Petersburg”. Series of in-depth interviews, content-analysis and analysis of discourse provide “corroborative evidence”. The research is based on fashion value framework, which regards fashion guided behaviour as a function of shared values called fashion values. The literature review generates insights about the role of fashion in high culture consumption and arguments pro applicability of the fashion values framework for theatre attendance. The data comes from 23 in-depth interviews with visitors and non-visitors of Perm opera and ballet theatre. The research develops the set of indicators of fashion awareness in context of theatre attendance. The results shows that institutionalized cultural capital and occupation in cultural industries matter for fashion awareness of a particularly participant. So far, it is supposed education and occupation play more important role as an explanation of fashion awareness than class does. The ways for future investigations are discussed
Московские музеи в социальной сети «ВКонтакте»: анализ сообществ и аудитории
Пугаева М. А. В кн.: Музей и проблему культурного туризма: материалы XIV круглого стола. СПб.: Издательство Государственного Эрмитажа, 2016. С. 142-152.

Social Media as part of the digital arena has become an integral part of our everyday life. The process of interaction between the company and the client varies depending on the platform (for example, the social network VKontakte and video hosting Youtube) and the objectives set by the company. Currently, social media is a way to interact and engage in dialogue with a new audience, for example, a small local museum can be opened to any audience around the world.

The 11th Siberian conference SIBCON-2015, the oldest conference of IEEE in Siberia, aims to offer opportunities to learn and to share information on the latest advances in communications, electron devices, and control systems. It will be held in Omsk, the Russian Federation, on May 23-25, 2015. The conference is organized by the IEEE on a regular basis in order to promote interdisciplinary discussion and interaction among scientists and engineers with an emphasis on the IEEE membership. While the scientific program is expected to create stimulating professional interaction, the crystal clear Irtysh River nature, warm spring atmosphere and wealth of historic monuments promise a pleasant and memorable stay.