systems. It provides knowledge covering all thermal length scales from IC to facility level. The symposium fosters the exchange of

knowledge between thermal engineers, professionals and leading experts from industry as well as the exchange of information on the 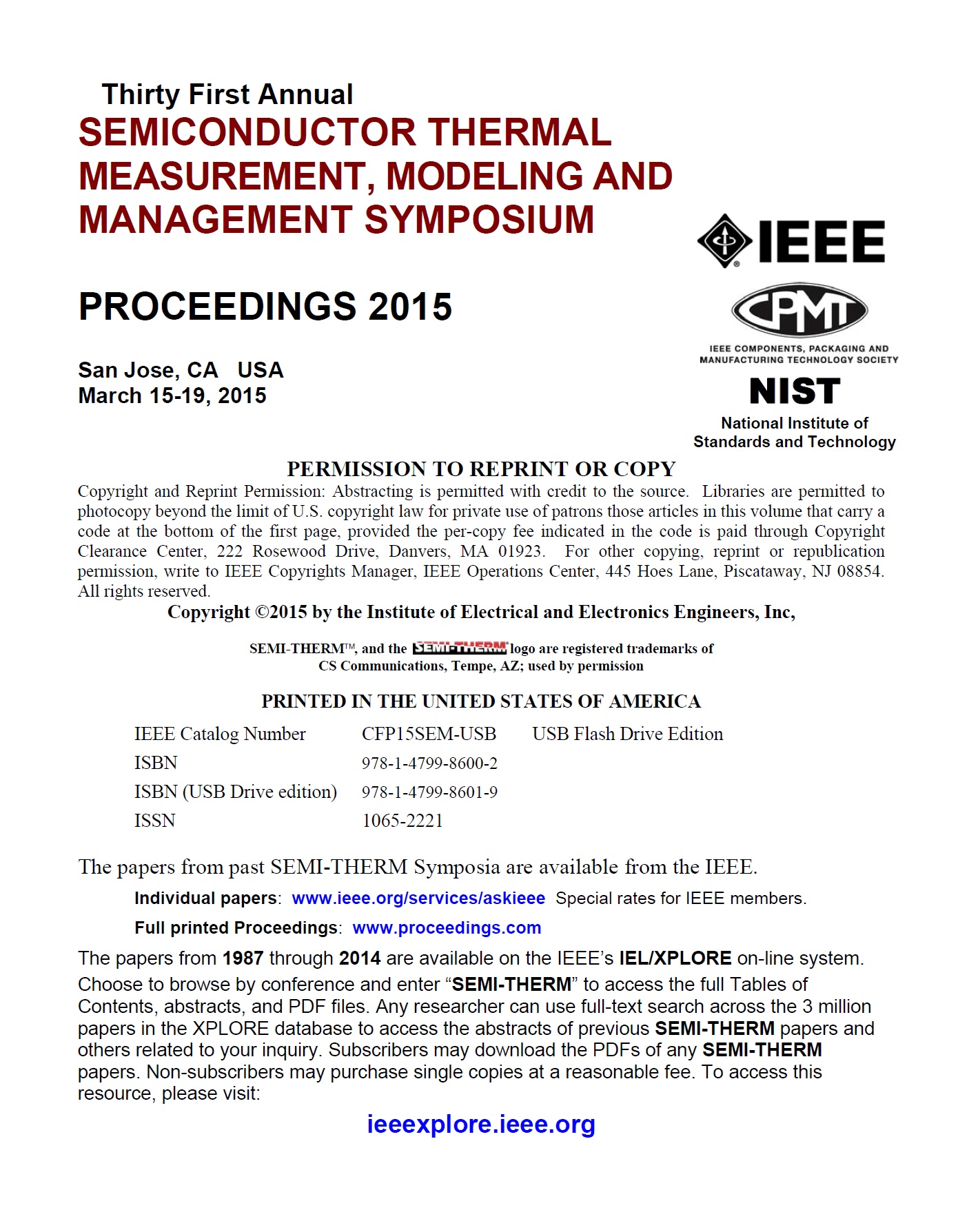 The methodology and software tools for multi-level thermal and electro-thermal design of electronic components is presented. The discussion covers 2D/3D constructions of: 1) discrete and integrated semiconductor devices; 2) monolithic and hybrid ICs; 3) MCMs and PCBs. The actual test validation through thermal measurement is demonstrated for all types of components.

The methodology and software tools for multi-level thermal and electro-thermal design of electronic components are presented. The discussion covers 2D/3D  constructions of:

The actual test validation using IR thermal measurement is demonstrated for all types of components.

The difference between manipulability indexes in IC and IANC models
Veselova Y. A. Economics. EC. Высшая школа экономики, 2012. No. 17/EC/2012.

Proceedings of the 22nd International Workshop on Thermal Investigations of ICs and Systems (Therminic 2016)
Edited by: A. Poppe. IEEE, 2016.

This 22nd edition of THERMINIC is again the main European event for academics and industry to share recent advancements in thermal issues of electronics and microelectronics, including problems of nano-scale heat-transfer, thermal modeling and simulation issues in solid-state lighting as well as cooling issues of power electronics.

The 22nd THERMINIC Workshop once more proposed a strong technical program. This year’s event had a special focus on advanced thermal management, thermo-mechanical reliability, solid-state lighting and power electronics components – both form design and testing aspects. The Components, Packaging and Manufacturing Technology Society co-sponsored this year‘s workshop, which gathered over 100 attendees from around the world.

Three types of copper traces for PCBs were investigated: 1) 2.5 μm thin film lines (Ti;Cu;Ni) on aluminium and ceramic (Al2O3) substrates; 2) 2.5 μm thin film lines (Ti;Cu;Ni;Au) on ceramic (Al2O3) substrates; 3) 15 μm traces (Cu;Ni) on polyimide substrate for high density interconnection PCBs. The width of all types of traces was varying in the range of 100-500 μm. The set of temperature-current diagrams for different PCB scenarios are presented and analyzed. The temperature caused by Joule heating was measured using IR camera Flir A40 with macrolens. For different cases the current was set in the range of 0.1-3 A; the measured temperature was in the range of 20-140 oC. The close agreement between the results measured and simulated with ELCUT software tool was achieved.

Automated electro-thermal analysis is realized in  the last version of Mentor Graphics PCB Design System. The special software tool AETA is developed and integrated into the Expedition Enterprise PCB Design System to automate the process of power-temperature traffic between electrical and thermal simulators. Furthermore AETA provides the graphical user  interface and the possibility to use the different versions of Mentor Graphics software.

For the first time in the domestic technical literature questions of designing of system of power delivery network (PDN) of electronic modules of electronic equipment are considered. Noise in the power supply system of high-speed digital modules are one of the basic problems without which decision working capacity of modules cannot be guaranteed. These decisions should be based on deep physical understanding of the processes occurring in the power supply system of digital modules, the analysis of sources of noise and methods of their suppression, the account of features of traditional and new componental base and outcomes, and also specificity of topological designing of multilayered printed-circuit boards. In the book the listed questions are in details considered, the scientifically-proved recommendations on design of printing modules of digital equipment are given. The statement is accompanied by the big number of examples and numerical calculations. The stated material has a practical orientation and is focused, first of all, on developers and designers of electronic equipment. The book will be useful to the technical experts occupied in research, industrial and other spheres of creation of electronic means. It is possible to recommend the edition as the manual to bachelors, masters and post-graduate students of corresponding directions of preparation.

Magnetic anisotropy of polycrystalline high-temperature ferromagnetic MnxSi1−x (x≈0.5) alloy films
Drovosekov A. B., Kreines N. M., Savitsky A. O. et al. arxiv.org. cond-mat. Cornell University, 2015
A set of thin film Mn<sub>x</sub>Si<sub>1-x</sub> alloy samples with different manganese concentration x = 0.44 - 0.63 grown by the pulsed laser deposition (PLD) method onto the Al<sub>2</sub>O<sub>3</sub> (0001) substrate was investigated in the temperature range 4 - 300 K using ferromagnetic resonance (FMR) measurements in the wide range of frequencies (f = 7 - 60 GHz) and magnetic fields (H = 0 - 30 kOe). For samples with x = 0.52 - 0.55, FMR data show clear evidence of ferromagnetism with high Curie temperatures T<sub>c</sub> ~ 300 K. These samples demonstrate complex and unusual character of magnetic anisotropy described in the frame of phenomenological model as a combination of the essential second order easy plane anisotropy contribution and the additional forth order uniaxial anisotropy contribution with easy direction normal to the film plane. We explain the obtained results by a polycrystalline (mosaic) structure of the films caused by the film-substrate lattice mismatch. The existence of extra strains at the crystallite boundaries leads to an essential inhomogeneous magnetic anisotropy in the film plane.