This chapter deals with emerging illiberal challenges—international and domestic—and their impact on the current state and prospects of liberalism, particularly in Russia. Is the liberal world order in peril and, if so, how grave is the threat? Has liberalism really failed ideologically speaking and in terms of policy? As happened during the New Deal, can liberalism in general—and Russian liberalism in particular—be “rebooted” conceptually and programmatically in response to pressing challenges? What are the fundamental issues of the liberal ideological and political agenda that need to be reevaluated? How can modern liberalism be “reset”? These are some of the fundamental issues addressed in this chapter. It provides a tentative typology of today’s illiberal challenges, a conceptual differentiation between the institutional and normative aspects of the global liberal world order, an analysis of the political and ideological context that may, at least partly, explain the miseries Russian liberals experience at the present moment, and also a tentative blueprint for the path forward of liberalism in non-liberal Russia. 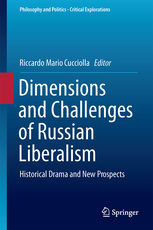