The Political Economy of the Blockchain Society

The review discusses the political-economic aspects of the concept of distributed capitalism allowed for by blockchain technology. As opposed to the first era of the Internet, where the industry of financial and information services was dominated by intermediaries, the blockchain era is characterized by development of a new institution of trust; disruption of financial intermediation; economic inclusion of hundreds of millions of citizens in developing countries; an increase in competition and a decrease in inequality. The paper focuses on the content of key political-economic categories being redefined in the blockchain era. First, labor value gives way to creative value which is manifesting itself in cryptocurrencies. Second, exploitation of workers is replaced by digital discrimination. The blockchain revolution is a solution to the problem of discrimination against intellectual property creators, who have to hand over a large part of the value created to intermediaries. Third, capitalism characterized by information monopoly gives place to free competition based on rivalry between cryptocurrencies. Fourth, class struggle is substituted by confrontation between agents of information monopoly system and those of distributed economy. The author considers the main opposition to distributed capitalism to stem from the feudal financial system which loses ground under new conditions, where economic agents may use alternative currencies and interact directly with one other without risk and high transaction costs. 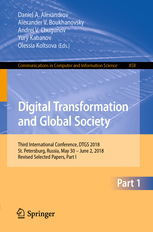 The paper contextualises the philosophy of Adam Smith and analyses the pre-history of political economy as being in large parts determined by notions of patriarchalism, i. e. the notion that the role of a head of state is analogous to the head of a private household. It is shown how this notion migrates from political philosophy proper (Bodin, Hobbes) into mercantilist discourses and that it is a fundamental part of Locke's economic theory. Adam Smith denies the validity of this analogy: his cosmopolitanism, his views on the divison of labour, and his arguments against interventionism are all directed against patriarchalist misunderstandings of the relationship between the economy and the state.

The papers in this special issue focus on the emerging phenomenon of cryptocurrencies. Cryptocurrencies are digital financial assets, for which ownership and transfers of ownership are guaranteed by a cryptographic decentralized technology. The rise of cryptocurrencies’ value on the market and the growing popularity around the world open a number of challenges and concerns for business and industrial economics. Using the lenses of both neoclassical and behavioral theories, this introductory article discusses the main trends in the academic research related to cryptocurrencies and highlights the contributions of the selected works to the literature. A particular emphasis is on socio-economic, misconduct and sustainability issues. We posit that cryptocurrencies may perform some useful functions and add economic value, but there are reasons to favor the regulation of the market. While this would go against the original libertarian rationale behind cryptocurrencies, it appears a necessary step to improve social welfare.

Building democracy and trade union rights in NIS
Gerasimova E. Brux.: International trade union confederation, 2010.
На пути к новой экономической теории государства
Ананьин О. И., Воейков М. И., Гловели Г. Дж. и др. Научные доклады Института экономики РАН. Институт экономики РАН, 2018
In this brochure, which was prepared within the framework of research on the topic of the state assignment, the author's approach to the construction of the economic theory of the modern state is presented. The realized historical and political economic analysis, made it possible to trace the evolution of the place and role of the state in a market economy, to identify a number of its basic models and to formulate a fundamental position on the transformation of the contemporary state from the subject of market space to its organizer, – which is the "playmaker state" model. The proposed approach is based on the theory of patronized goods, and on the general concept of failures of the mixed economy, that was developed within the framework of the research conducted, which enabled to look at the category of state paternalism from a new perspective and to identify the risks of its negative consequences. Along with other types of flaws of the mixed economy, a special case was described, – that was called "paternalistic failure", which represented a combination of flaws of public choice and of irrational actions of civil servants. Five types of irrational behavior of bureaucracy, that generated managerial failure, were considered. It was shown that, unlike the market failures that caused state activity, the paternalist failure required other actions, aimed at democratization of the formation of paternalistic attitudes, or settings, and at the introduction of procedures that limited the arbitrariness of the bureaucracy. The theoretical and applied aspects of the concept of consensus democracy were considered, that ensured the liberalization of the processes of political and economic decision-making, on the basis of civil society institutions and, on the basis of civil control over the activities of executive bodies
Анализ воздействия монетарного шока на экономику: история вопроса и некоторые новые идеи
Кавицкая И. Л. Журнал институциональных исследований. 2010. Т. 2. № 4. С. 76-83.

Минимальная групповая парадигма: история создания и современное развитие
Котова М. В., Агадуллина Е. Р. Психологические исследования: электронный научный журнал. 2010. Т. 14. № 6.
The scope of the freedom to provide services: prohibited restrictions
Postnikova E. Law. LAW. Высшая школа экономики, 2013. No. 19.
The freedom to provide services is one of the four fundamental freedoms of the European Union (EU) internal market. Interstate trade in services is impeded by different obstacles consisting of the high level national regulation. The objective of this paper is to reveal the nature of prohibited restrictive national measures. The research is based on the analysis of the Treaty of Rome (now the Treaty on the functioning of the European Union), secondary EU law, the evolution of EU case-law, and a range of doctrinal views. It is argued that the definition of prohibited restrictions is the most complex aspect of the case-law on services. The research compares the concept of the restrictions that are to be abolished within the scope of the freedom to provide services and of other freedoms. This study also investigates the correlation between EU and World Trade Organization (WTO) legal mechanisms in the sphere of the provision of services.