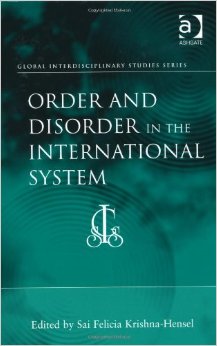 This volume examines the complex international system of the twenty first century from a variety of perspectives. Proceeding from critical theoretical perspectives and incorporating case studies, the chapters focus on broad trends as well as micro-realities of a Post-Westphalian international system. The process of transformation and change of the international system has been an ongoing cumulative process. Many forces including conflict, technological innovation, and communication have contributed to the creation of a transnational world with political, economic, and social implications for all societies. Transnationalism functions both as an integrative factor and one which exposes the existing and the newly emerging divisions between societies and cultures and between nations and states. The chapters in this volume demonstrate that re-thinking fundamental assumptions as well as theoretical and methodological premises is central to understanding the dynamics of interdependence.

The article explores the concept of ‘New Challenges and Threats’ appeared in Anglo-Saxon studies on international security and analyzes the use of the concept in the foreign policy practices of the Western countries.

The article focuses on trends in maritime piracy in the Aden Gulf, which were visualized in 2009-2012. The research assesses the core actors, their activities and corresponding reactions of the local and international authorities. The study is based on analytical monitoring, which was conducted in 2009-2012.

The problem of maritime piracy in the Aden Gulf presents a new research area in regional and global studies. The focal academic interest is attached to both theoretical and practical issues surrounding the problem of piracy: analysis of the current state of this issue, question on the status of pirates as possible actors of the regional security system, new trends in maritime piracy exhibited in the region.

At the current level of this problem, it is necessary to prove or disapprove of the thesis that today maritime piracy is a local, and not international, problem. The same applies to the issue whether maritime piracy is linked with Somalia state failure and the necessity of international reaction to this issue. Threats to global security that may arise from this issue also require assessment.

This article incorporates the consideration of soft security issues into analysis of current trends in maritime piracy in the Aden Gulf. In particular, the spectrum of issues that influence security configuration in this region is widened to include tendencies in internal political development, and state failure issue, as it fosters the conditions favorable for maritime piracy and kidnapping in this region.

A new method of research is applied in this material. This is the method of analytical monitoring, which was used by the author to apprehend the situation in the Aden Gulf for several years from 2009 to 2012. This allowed creating a database of events, related to this issue. This database widens the opportunities of conducting long-term research on the issues of maritime piracy in the Aden Gulf.

A current trend in International Relations (IR) suggests that challenges to the international system are of a post-Westphalia character. These new challenges are caused by the gradual decline of the state as the only authoritative player on the international relations and security chessboard. A shift in focus is evident since the classic domain of state prevalence - security - is now likely to fall into the hands of new actors.

As a result, several states and regions dotting the international community are defined by, de-facto, cases of weak and failing polities owing to eroding institutions of governance. Examples of failed states demonstrate that the failure of the State, as a key player in contemporary IR, to fulfil its duties in political processes, in most cases, leads to humanitarian crises. Thus, in order to prevent related tragedies, there is a pressing need to scrutinize the links between state failure and security, if we are to assume that it is the State which is vested with the responsibility to safeguard its citizens.

Moreover, the examination of the prism that distorts state rule is necessary to account for the new possible global threats that state failure/collapse may bring. This can demonstrate how poor governance - on a local level - and, eventually, state failure are transferred to a higher level of threat hierarchy. For the purpose of exploring this issue it is important to address the question: how state failure influences security in a post-Westphalian international environment?

A preliminary hypothesis is that the modern security confi guration in an underdeveloped region poses challenges to governance. In its turn, poor governance tends to generate sustained internal conflict(s) within the states of the region. This provokes a spiral of internal violence, which may be viewed as a threat to the existence of sustained states in diverse and changing security environments and could, through the process of contagion, spread to other regions.

In this regard, an important issue raised in this research is based on providing a correlation between governance inefficacy and the low sustainability of state(s), from which practical implications to the assessment of the states' capacities in the post-Westphalia era may be derived. The analyzed case of Somalia reflects a growing need for realist assessments to adequately view patterns of governance in underdeveloped countries in underdeveloped regions.