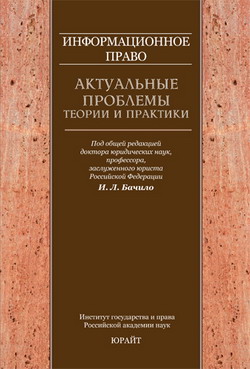 Offers its readers an article is a concise statement of the hypothesis on the possible conceptual foundations of information law of the digital age, that is the system of control in relationships, which must inevitably arise in the expanding penetration of information and networking technologies in the life of modern society. This vision of information law as the law of cyberspace, the Russian equivalent of English Cyberspace Law, was first presented by us January 27, 2000 at a conference on actual problems of information law at the Moscow State Law Academy. OE Kutafin. If you submit that information and communication networks - is not just a new means of communication, and the new habitat area of human civilization, a new sphere of human activity and the scope of the new law, it is easy to understand that the information law should have a special method of regulation, because regulation of the public relations, first of all, will be carried out in cyberspace.