The paper describes manipulation techniques we face in our everyday life, why manipulation works and how we can overcome it so that not to meet any negative consequences. 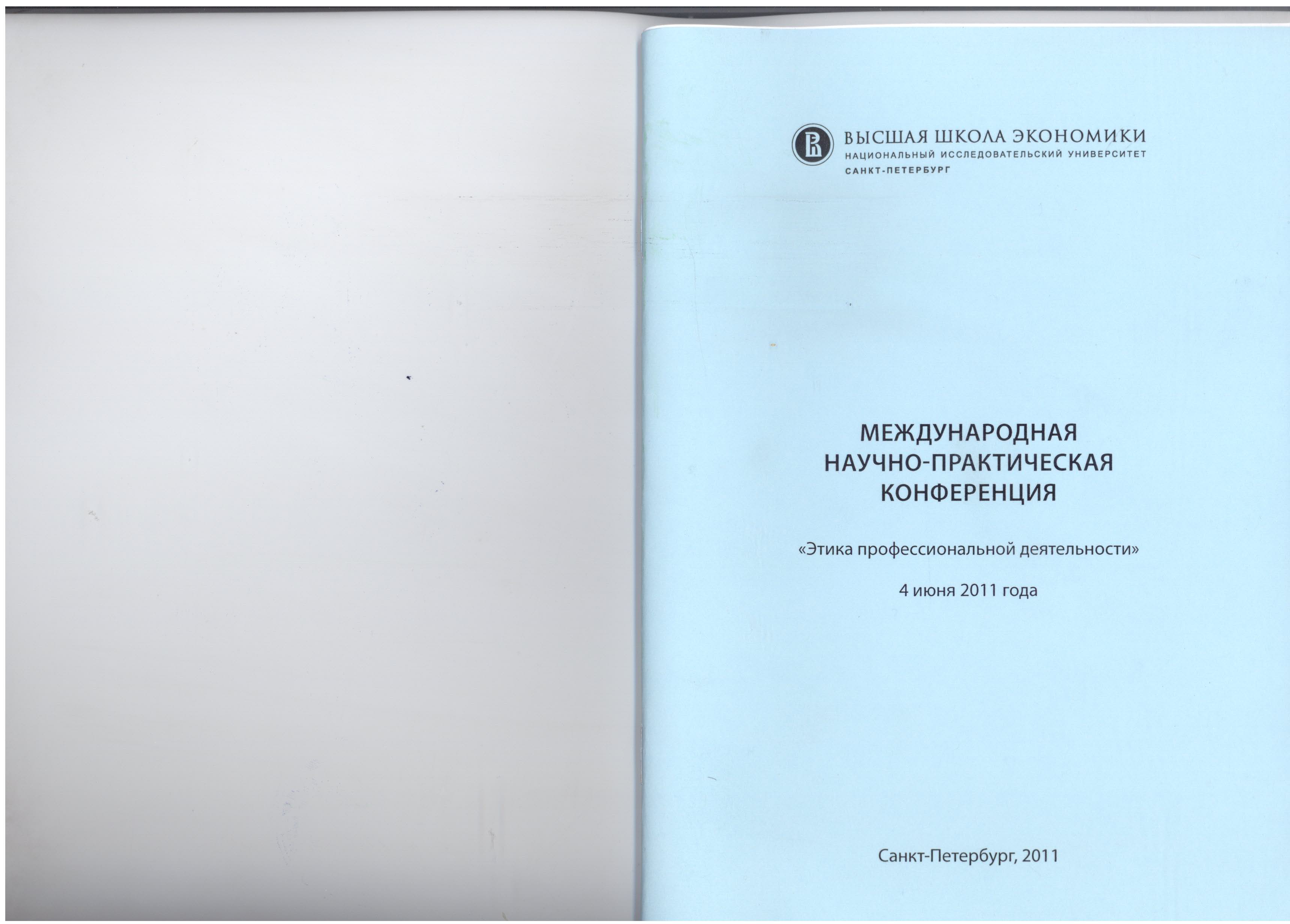 In this study we compare ethical values ​​of Russian law students and professional lawyers. We focus on the problem of choosing between personal benefits and professional responsibility, as well as on the transformations of ethical values between university and the bar. In two studies using a single methodology we have surveyed 282 law student in three Russian universities and 372 lawyer from 9 regions of Russia. At the moment this is the only study in Russia, which allows us to compare the views of law students and professional lawyers, and find out at what point the idea about dominance of personal benefit over professional responsibility established. We conclude that the reasons for the differences in professional ethics are rooted in the system of legal education.

The article introduces the approach to studying the meta-individuality of a teacher from the viewpoint of the theory of integral individuality. The empiric results are presented based on the study of meta-individual manifestations of a primary school teacher taking into account the development level of the professional activity.

Who Demands Collective Action In An Imperfect Institutional Environment? A Case-Study Of The Professional Community Of Attorneys In Russia
Kazun A. P., Yakovlev A. A. Sociology. SOC. Высшая школа экономики, 2014. № 54.
We analyse the professional community of attorneys in Russia in order to understand their potential for collective action in an imperfect institutional environment. In 2013 we conducted a survey of 372 attorneys in 9 regions of Russia. Two main hypotheses are tested: 1) lawyers with strong ethical values have higher demand for collective actions; 2) the negative experience of clients rights violation by law enforcement officers can motivate attorneys to support the foundation of a strong professional association. Also we suggest that attorneys’ professional community with bona fide members at the core could be an instrument for an estimation of the quality of law enforcement in Russia.
Профессиональная активность в структуре интегральной индивидуальности учителя начальных классов
Краснов А. В. В кн.: Материалы докладов XV Международной конференции студентов, аспирантов и молодых ученых "Ломоносов". Секция "Психология". М.: МАКС Пресс, 2008. С. 297-300.

The textbook summarizes and systematizes the existing theoretical research and practical developments in the field of conflictology in accordance with modern requirements, to develop a unified approach to the preparation and conduct of training sessions with students who are trained in the disciplines of "Conflictology", "The use of profiling in management activities"," The formation of the personnel policy of the organization "under the master's program in the direction of training 38.04.02 "Management", 38.04.03 "Personnel Management", 38.04.04 "State and Municipal Management".

The training manual helps to increase the level of socio-psychological competence of managers and employees of internal affairs bodies.

Zustand und Probleme der Juristen in Russland aus Sicht der Anwälte
Yakovlev A. A., Kazun A. Russland-Analysen. 2014. No. 280. P. 5-15.
Поддержание изменений в университетах. Преемственность кейс-стади и концепций
Кларк Б. Р. М.: Издательский дом НИУ ВШЭ, 2011.
University Admission In Russia: Do the Wealthier Benefit from Standardized Exams?
Prakhov I., Yudkevich M. M. Education. EDU. Высшая школа экономики, 2012. No. 04.
This paper examines the impact of family income on the results of the Unified State Examination (the USE) and university choice in Russia. We argue that, even under the USE, which was introduced instead of high school exit exams and university-specific entrance exams, entrants from wealthy households still have an advantage in terms of access to higher education, since income positively affects USE scores through the channel of a higher level of investment in pre-entry coaching. Moreover, richer households make more effective decisions about university. We have found positive and significant relationships between the level of income and USE results for high school graduates, with an equal achievement before coaching. We subsequently propose that students from the most affluent households do invest more in additional types of preparation (pre-entry courses and individual lessons with tutors), and those extra classes provide a higher return for children from this particular income group. Finally, we show that holding the result of the USE equal, students with good and fair marks from wealthy families are admitted to universities with higher average USE score than those from poorer families. As a result, we can observe that income status is a factor that significantly influences enrollment to university.
Материалы 77-й Международной научно-технической конференции ААИ «Автомобиле- и тракторостроение в России: приоритеты развития и подготовка кадров»
Кн. 14: Секция 14. Развитие образовательного процесса на основе современной системы интерактивного обучения в условиях модернизации образования. М.: МГТУ «МАМИ», 2012.
Использование временных характеристик в преподавании курса "Юридическая техника"
Тенилова Т. Л. Юридическая техника. 2009. № 3. С. 309-316.
Большая чеховская игра
Шапиро Н. А. Литература. Учебно-методический журнал для учителей словесности. 2011. № 14. С. 27-29.
2D:4D Asymmetry and Academic Performance: Evidence from Moscow and Manilа
Nye J. V., Androushchak G., Desierto D. et al. Education. EDU. Высшая школа экономики, 2011. No. 01.
Exposure to prenatal androgens affects both future behavior and life choices. However, there is still relatively limited evidence on its effects on academic performance. Moreover, the predicted effect of exposure to prenatal testosterone (T) - which is inversely correlated with the relative length of the second to fourth finger lengths (2D:4D) - would seem to have ambiguous effects on academic achievement since traits like confidence, aggressiveness, or risk-taking are not uniformly positive for success in school. We provide the first evidence of a non-linear relationship between 2D:4D and academic achievement using samples from Moscow and Manila. We find that there is a quadratic relationship between high T exposure and markers of achievement such as grades or test scores and that the optimum digit ratio for women in our sample is lower (indicating higher prenatal T) than the average. The results for men are generally insignificant for Moscow but significant for Manila showing similar non-linear effects. Our work is thus unusual in that it draws from a large sample of nearly a thousand university students in Moscow and over a hundred from Manila for whom we also have extensive information on high school test scores, family background and other potential correlates of achievement. Our work is also the first to have a large cross country comparison that includes two groups with very different ethnic compositions.
Роль деловых игр в формировании профессиональных компетенций на занятиях по английскому языку
Жунич И. И., Ткачева Н. Л. Вып. 1: Содержание профессиональной подготовки по иностранным языкам в неязыковом вузе: современные тенденции, актуальные проблемы, пути решения: доклады и материалы Международной научно-практической конференции. М.: Логос, 2012.
Описание графика как способ профессионально направленного обучения иностранному языку в нелингвистическом вузе
Успенская Е. А., Шмаль М. В. Альманах современной науки и образования. 2011. № 3(46). С. 171-181.
Institutions and the Allocation of Talent
Natkhov T., Polishchuk L. Economics. EC. Высшая школа экономики, 2012. No. 15.