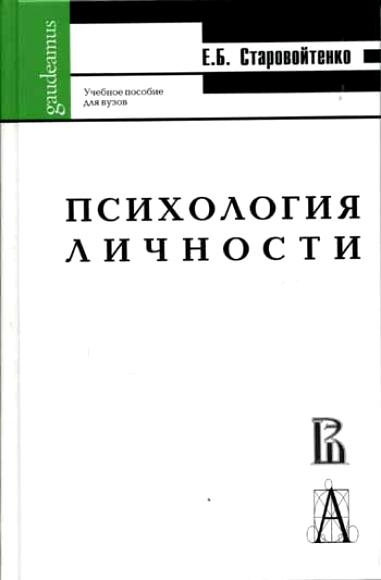 Культурная психология личности
Старовойтенко Е. Б. М.: Академический проект, 2007.
The “Conversation Partner” Phenomenon in the Dialogical I-Other Relationship
Starovoytenko E. B., Derbeneva A. Psychology. PSY. Высшая школа экономики, 2016. No. WP BRP 69/PSY/2016 .
This paper develops a new approach to study one’s relationships with others, focusing on the conditions and the effects of the dialogical nature of a person. Theoretical modelling, hermeneutics, qualitative and quantitative methods are applied. A solution for detecting the conditions of self-development and social positioning of a person, which are rooted in dialogical I-Other relationships, is suggested. The originality of the paper is found in describing the relation to the other as the I-Other relationship; in the elaborated model that highlights how different dimensions of I-Other relationships (between I and Other, I-in-Other, Other-in-I, I-in-Myself) leads to truly a dialogical mode of being; in revealing the potentials of the Conversation Partner in dialogical I-Other relationships (subjective interrelations and the significance of Conversation Partners, their activity, the fullness of the reflection of significant Conversation Partners); in the description of different “hypostases” of Conversation Partners (real, ideal, imagined, secret, I as Myself) by means of hermeneutics; in the “My Conversation Partner” method; and in the empirical study of existential and social resources of Conversation Partners. The theoretical background of the study is formed by the works of M. Bakhtin, M. Buber, M. Heidegger, J.-P. Sartre, E. Levinas, and by the works of modern psychologists such as G. M. Kuchinsky, A. V. Rossohin, E. B. Starovoytenko, C. T. Brown, P.W.Keller, H. Hermans, F. Rivetti Ваrbo. The results show the potentials of social adaptivity, affiliation, dominating, positive solitude, joy of solitude, freedom, self-transcendence, existential fulfilment are associated with the richness of one's Conversation Partners. A real Conversation Partner is associated with a greater affiliation resource, a secret one with a greater solitude resource, an ideal one with a higher potential to constructively dominate the interaction.
Личность в трудных жизненных ситуациях как актуальное научное направление копинг-исследований в России: материалы Всероссийской научно-практической конференции с международным участием
Омск: Издательство Омского государственного университета, 2009.
К проблеме интервенций в ситуации кризиса личности: от теории к практике
Овчинникова Ю. Г. Культурно-историческая психология. 2010. № 3. С. 93-98.