Teaching aid is a series of exercises aimed at assimilation and comprehension of the theoretical course "Russian language and culture of speech." During the study course, students should not only strengthen knowledge in the creation, operation and perception of the text, but also learn how to apply them practically to achieve their communication and marketing purposes. The theoretical material is supposed to fix in the form of case studies and business games. 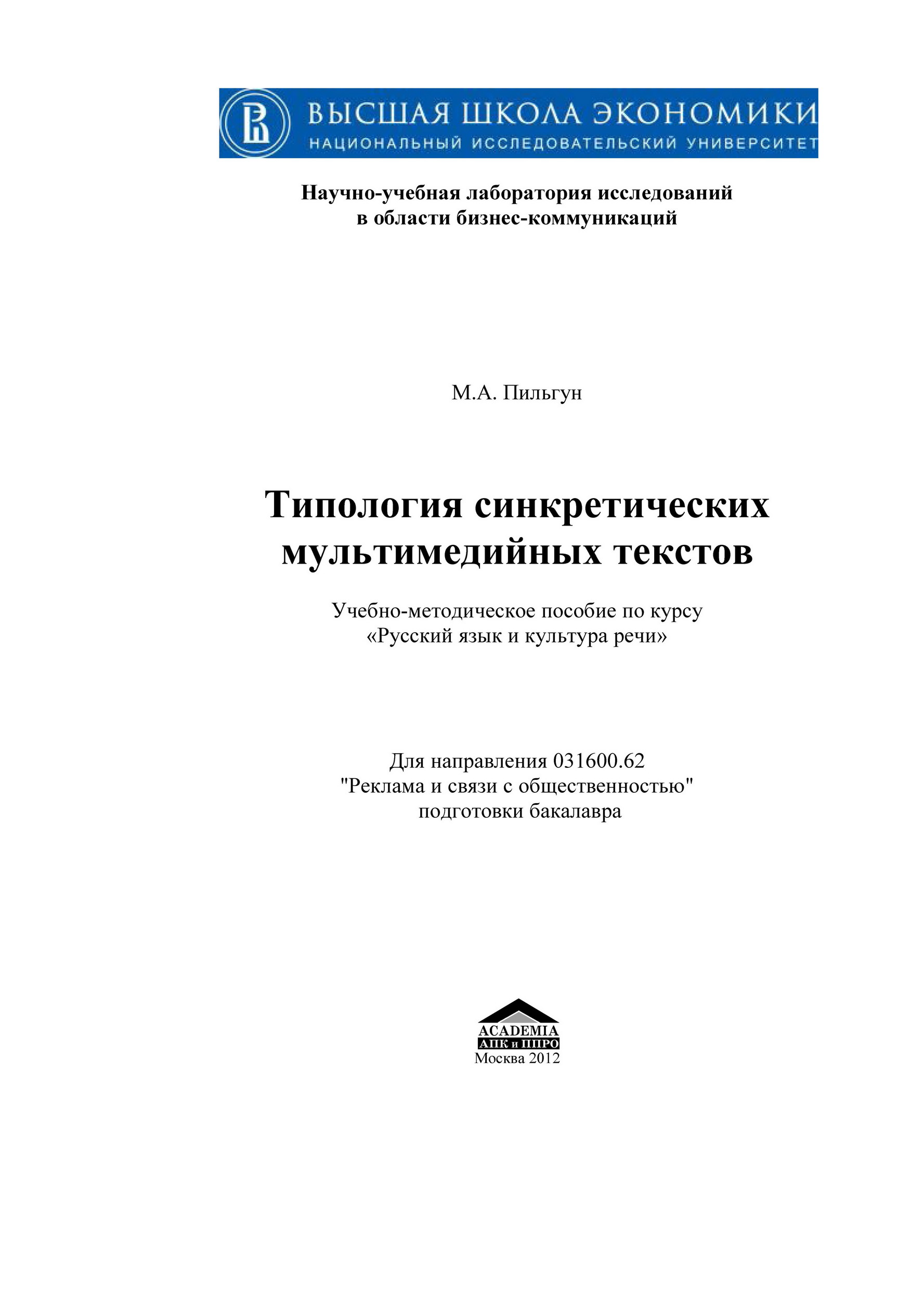 Similar publications
Язык как система ориентиров в социальном пространстве
Никитина Е. Б. В кн.: Информационно-коммуникационное пространство и человек (Материалы II международной научно-практической конференции 15-16 апреля 2012 г.). Пенза; М.; Витебск: Научно-издательский центр "Социосфера", 2012. С. 32-36.
The following article is an account of the author’s opinion of the role of language within the framework of society. The paramount idea is that language should not be viewed simply as a means of communication. The author suggests a more profound understanding of language as a medium between society and the culture against the background of which it manifests itself. The aforementioned conception of language provides the author with the opportunity to assert that language constitutes a system of guidelines without which society would lose its identity.
Фаст-фуд как актуальная гастрономическая практика потребления
Сохань И. В. Журнал социологии и социальной антропологии. 2011. Т. XIV. № 5. С. 260-269.

The article considers the main trends in the contemporary media space and analyzes the coverage of Russia issues in online versions of USA Today and The New York Times. The ideas of M. McLuhan, D. McQuail, J. Van Deijck, M. Castells form the theoretical basis of the research. USA Today and The New York Times provide free access to most of their materials which are available for the computer, Iphone, and Ipad users. Video and slide-shows attract readers from all over the world. Russia became actual theme in 2014 in the US media, but it had been peripheral during the previous decade. Sochi Olympiad, Crimea unification with the RF, conflict in Ukraine, Putin, - those were the main topics of USA Today and The New York Times related to Russia. USA Today's coverage of Russian problems was more neutral and balanced compared to tough rhetoric of The New York Times. At the same time both newspapers view the country as an “alien”, but not an enemy.

Descartes and an Indifferent Deceiver
Rogonyan G. Философия и исследования культуры. WP20. Высшая школа экономики, 2014. No. WP20/2014/02.
The aim of this paper is to show how and why the method of radical interpretation, proposed by Donald Davidson, can solve the problems that are formulated in a variety of skeptical scenarios. In particular, the method of radical interpretation deprives Cartesian scenario (both in its traditional and recent versions) all its force and even the status of philosophical problem. Appealing to the difference between intendede and unintended lies one can see how the global skeptical scenario gets solved in both cases. The paper also formulates an argument in favor of expanded version of naturalized epistemology that was offered by W. V. O. Quine - first of all, due to the introduction of social factors. In particualr, there are always at least two necessary limitations imposed by the communication on our hypothesis about knowledge and delusion. In addition, the paper explains the need for a moderate externalism (both perceptual and social) to the variants of Descartes and Hume's skeptical scenario.
К вопросу об инновациях в корпоративных коммуникациях
Мягкова А. Ю. В кн.: Инновационные модели бизнес-коммуникации: стратегии и тактики. М.: Издательский дом НИУ ВШЭ, 2011. С. 53-59.

Язык и дискурс средств массовой информации в XXI веке
Edited by: В. Демьянков, И. Кобозева, Г. Солганик М.: Академический проект, 2011.
A Provocative Event, Media, and Religious Choice: The Pussy Riot Case as a Natural Experiment
Skorobogatov A. Economics/EC. WP BRP. Высшая школа экономики, 2014. No. WP BRP 59/EC/2014.
This paper uses the famous events related to Pussy Riot as a natural experiment to examine the effect of alternative media on church membership. A differences-in-differences strategy is used to explore the effect in question. The hypothesis is that, given a lack of religious background on the majority of the population and strong temporal interest in religious issues promoted by some provocative event, mass media can substantially affect religious choice. To check if this is the case, we compare the dynamics of religious choice of those exposed to alternative media reports on church topics and the rest of the people. As a proxy of familiarity with an alternative view, we use a dummy variable for using Internet. Our main result is that, during the experiment run over the year 2012, the growth of self-reported Orthodox and strict Orthodox believers was significantly lower in the treatment group than in the control group. Exposure to alternative media coverage turned out to heavily affect religious choice.
Государственные контракты в информационной сфере: опыт и проблемы развития
Евликова В. В. Государственная служба. 2012. № 2. С. 99-101.