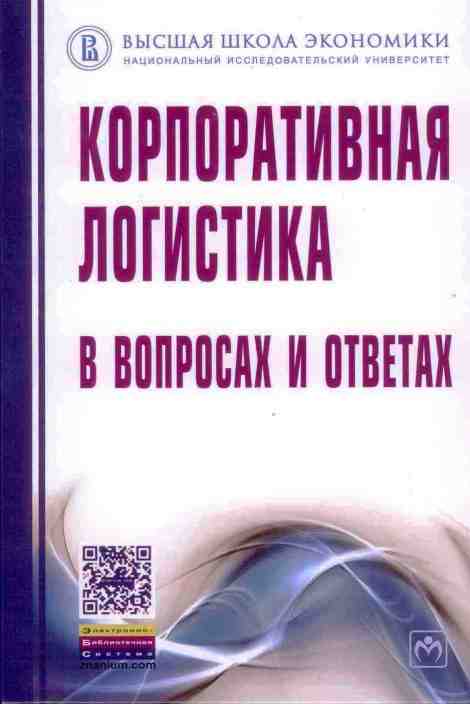 Similar publications
Корпоративная логистика: 300 ответов на вопросы профессионалов
Сергеев В. И., Стерлигова А. Н., Дыбская В. В. и др. М.: ИНФРА-М, 2018.
Будущее цепей поставок в интеграции на макро-уровне
Сабаткоев Т. Р., Султанов Р. Р. Логистика и управление цепями поставок. 2012. № 2 (49). С. 25-32.
At this article we describe the benefits from integration not just within one supply chain, but within a net of different supply chains around the world. Today, there is no single methodological approach to integration with companies from different supply chains. However, with thoughtful approach to information management all potential risks from integration with vendors from other supply chains can be minimized, and at the same time benefits from integration with vendors from other supply chains can improve the efficiency of each integrated company, improving its competitive advantage. We will show which major issues the integration on global level can solve, from which modules the integration system should consist and which principles it should follow.
Развитие опорной сети региональных транспортно-логистических центров на территории Республики Казахстан
Прокофьева Т. А., Тулендиев Е. Е., Ювица В. Н. Железнодорожный транспорт. 2010. № 7. С. 64-68.
Управленческие решения в логистической системе управления качеством
Кирюшин С. А. В кн.: Стратегическое управление предприятиями, организациями и регионами: сборник статей Всероссийской научно-практической конференции. Ч. 1. Пенза: РИО ПГСХА, 2007. С. 166-168.
Модели управления инвестициями в логистических системах
Мищенко А. В., Карабулина Е. Е. Логистика сегодня. 2010. № 6. С. 380-388.
Логистика: Современные тенденции развития
М.: Издательство Политехнического университета, 2011.
Оптимизированные производственные технологии и теория ограничений
Фель А. В., Левина Т. В., Путилин А. М. В кн.: Логистика: Основы. Стратегия. Практика. М.: МЦФЭР, 2007.
О статусе транспортной логистики
Герами В. Д., Волков В. В кн.: Логистика: Современные тенденции развития. М.: Издательство Политехнического университета, 2011.
Using CLV concept for marketing budgets allocation
Panteleeva E., Oyner O. K. Management. MAN. Высшая школа экономики, 2012. No. 04/MAN/2012.
The paper evaluates the usefulness of customer lifetime value (CLV) as a metric for marketing budget allocation by developing a framework that enables managers to maintain customer relationships proactively through different elements of marketing mix, in order to maximize CLV. The analysis is based on data from a hardware components PC B2B company and suggests that there is a potential for increased sales and CLVs when managers design resource allocation rules that maximize CLV. Managers can use the authors’ framework to distribute marketing resources efficiently across customers and when choosing between different promotional activities.
Is Education a Signal on the Russian Labour Market?
Aistov A. Education. EDU. Высшая школа экономики, 2012. No. 5.
This research focuses on estimating the signalling role of education on the Russian labour market. Two well-known screening hypotheses are initially considered. According to first of these, education is an ideal filter of persons with low productivity: education does not increase the productivity of a person, but it does give him the possibility to signal about his innate productivity via an educational certicate. The second of these hypotheses admits that productivity actually does increase during the period of study, but nevertheless the main objective of getting an education is to acquire a signal about one's productivity. Information theory suggests that employees use education signals during the hiring processes whereby employers screen potential employees. Employers and other categories of self-employed workers are usually not screened by the labour market via their educational attainments. Comparison of the returns to education of employees vs. self-employed workers could show the difference between the returns to signals and the returns to human capital. Yet another way to understand the signals is to consider the time dynamics of the returns to education for employees staying in the same firm. This helps us to answer the question about whether the signals are valuable only during the hiring process, or whether they remain valuable during the whole experience with the firm. This research is based on the Mincerian-type earnings functions, estimated on RLMS-HSE and NOBUS data. On the basis of the available information, we cannot say that the returns to signals and human capital differ significantly in Russia. Nevertheless we can say that, for the majority of men, the return to educational signals decreases with time spent in the same firm, while we observe the opposite for women.
Teacher Characteristics and Student Achievements in TIMSS. Findings gained from applying the "first-difference" method to TIMSS-2007 data
Khavenson T., Tyumeneva Y. A. Education. EDU. Высшая школа экономики, 2012. No. 06.
The advantage of Trends in International Mathematics and Science Study is that not only does it perform a direct cognitive assessment of students concerning these students' teachers, but also their education, work experience and the instructional strategies used in their classes. In order to estimate teachers’ characteristics effects on a student’s achievements and overcome the limits of the TIMSS' correlational design, we have employed the first-difference method. Teachers’ characteristics effects have also been measured with the usual regression method. The effects discovered varied from one subject field to another, and there has been a difference between the results gained by using the firstdifference method and OLS regression analysis model. The first-difference method has revealed a negative effect of reproductive tasks and group work in math class, whereas comprehension tasks and tasks for developing meta-cognitive skills have shown a positive effect. On the contrary, reproductive tasks for science classes have had a positive effect while comprehension tasks and tasks for developing meta-cognitive skills have had either none or negative effects. Apart from this, a teacher's experience has had a significant effect on natural science subjects as opposed to mathematics. The possible interpretations of these results are discussed in this paper
Теория менеджмента
Жичкин А. М., Гурьянова С. Ю. М.: Московский государственный институт электроники и математики, 2011.
Анализ показателей портовой деятельности
Федоренко А. И., Зеленов Н. Н. Логистика сегодня. 2010. № 5. С. 296-311.