The Transnationalization of Anti-Corruption Law

Chapters
In the ocean of anti-corruption compliance standards and guidelines: time for codification?
Ivanov E. A. In bk.: The Transnationalization of Anti-Corruption Law. Routledge, 2021. Ch. 10. P. 243-263. 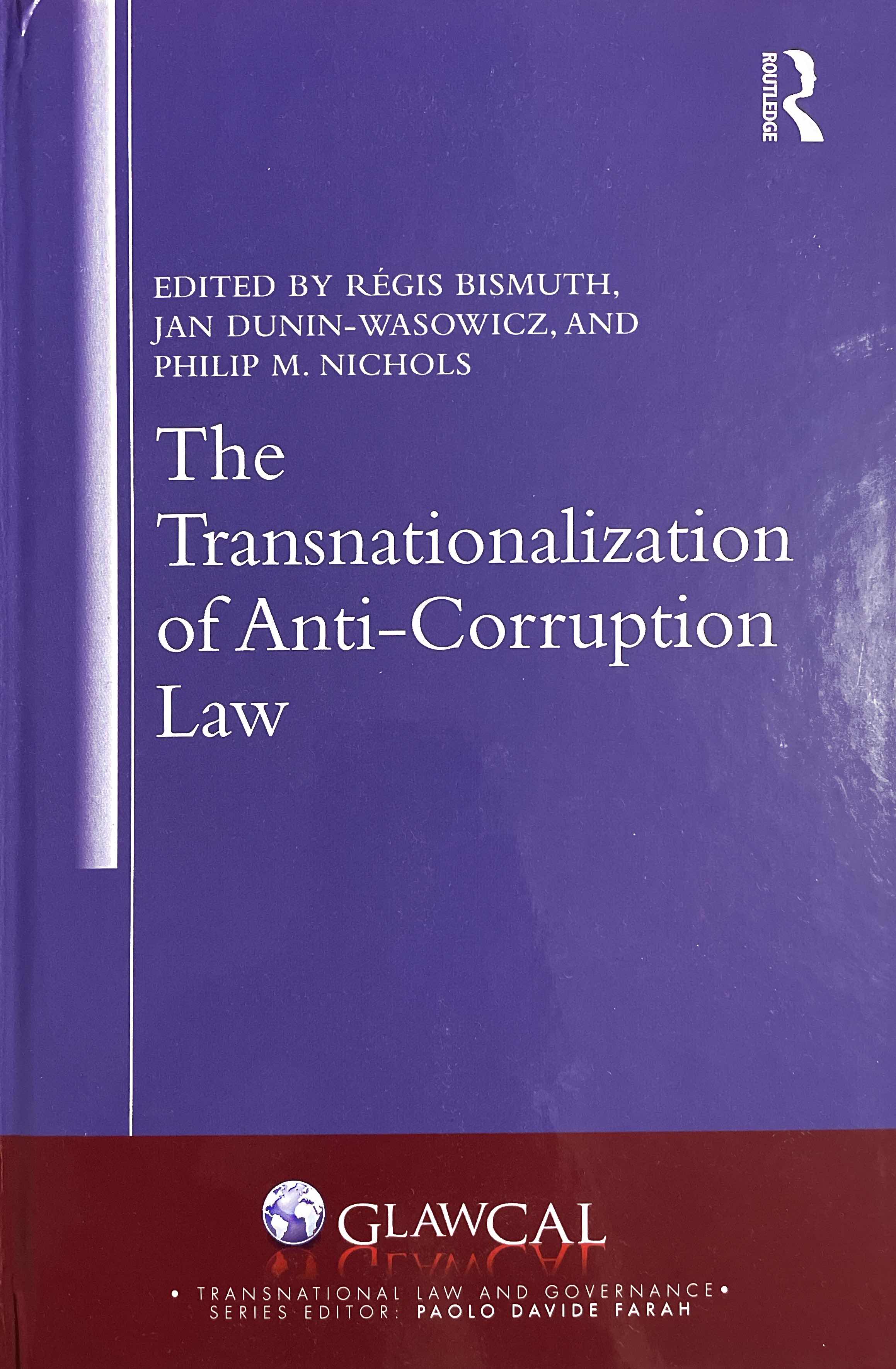 The book contains articles written for the international conference  "Legal Aspects of the BRICS", held 6-8 May 2013 at the University of "Tor Vergata" (Rome). They are grouped into the following sections: Legal basis BRICS: International law and Roman law; environment and sustainable development; trade: international contracts and contemporary  legal systems; energy and legal instruments.  Articles are devoted to actual problems of the functioning of the BRICS and cooperation of BRICS countries.

The author analize implementation of the OECD Convention on Combating Bribery of Foreign Public Officials in International Business Transactions of 1977 in the United Kingdom and in the United States. Special attention paid to the influence of the Convention on the  development of anti-corruption compliance control in companies, to the liability for corruption offenses and application of the UK and the US anti-corruption law to foreign companies.

Discouragement through incentives
Dmitri V. Vinogradov, Elena V. Shadrina. Working Paper 12-2018. Working Paper 12-2018 . University of Glasgow, 2018
Incentives are usually designed to promote desirable behaviour. In many instances, however, even in the absence of an incentive scheme, people may deliberately choose to act as desired. In such a case, introducing a system of incentives may discourage people from doing this. The discouragement mechanism works through the pos- sibility of errors that may wrongly classify the observed behaviour as undesirable, and hence trigger penalties. The effect is amplified by pessimism, which leads to an overestimation of the error probability, and by the disappointment from errors, which increases the disutility of unfair penalties. This approach is capable of ex- plaining two typical observations for enterprises/industries subject to environmental regulation – overcompliance (excessive investment in compliance) and discretionary inspections by regulators (raised frequency of inspections to enterprises suspected of non-compliance).
Условия въезда иностранцев на территорию государства
Ганюшкина Е. Б. Право. Журнал Высшей школы экономики. 2010. № 4. С. 72-84.

States may stipulate laws and rules, specifying conditions for foreigners to be admitted to another state's territory. Tightening requirements and making new restrictions for people who are going to visit a foreign country are one of efficient tools of foreign policy. International law has no norms obliging states to motivate the denial for a foreigner's admission into a foreign territory. The state cannot deny the admission for a foreigner if it contradicts obligations of the state implied in agreements concluded between the state of residence and an international intergovernmental organisation or in the treaties on privileges and immunities of international organisations.

The article covers principal provisions of the UN Convention on Contracts for the International Carriage of Goods Wholly or Partly by Sea. The study focuses on the specifics of acting legal regimes of liability for failing to preserve goods under carriage by sea and shows the necessity to make a uniform legal regulation. The article also shows wide boundaries for applying the new Convention compared to the apllicable one and the liability kept by the carrier for failing to preserve goods and for delaying its delivery. The difference has been given between negotiable and non-negotiable transport documents, and an electronic transport record has been described as an alternative to a «hard copy» document. The article is also supplied with considering issues of period of time for suit, jurisdiction, and arbitration.

Privacy and Legalization of Mass Surveillance: In Search of a Second Wind for International Human Rights Law
Rusinova V., Pereverzeva A. Law. LAW. Высшая школа экономики, 2020. No. 97.
This paper revisits the traditional trade-off between privacy and security, which underpins the compatibility of general and indiscriminate mass surveillance with international human rights instruments, and extends the orthodox patterns of legal argumentation using interdisciplinary knowledge, which is able to nurture, and to be translated into, the language of International Human Rights Law. In search of new resources and a second wind for the overburdened legal concept of privacy, this research combines a positivistic legal perspective with knowledge from sociologically framed surveillance studies, political theory, behavioral economics, and computer science, and deals with the threats and responses thereto from this epistemological standpoint. The first of three threats singled out in the paper—the ‘securitization’ of the danger of terrorism—is treated through embedding the effectiveness of predictive algorithms to the proportionality test. A consensus of ‘Big Brothers’ to use mass surveillance tools as the second threat is considered using constitutional theory and the bridge of the ‘democratic society’ component included in some international human rights instruments to transpose issues of fair representation to the standard of review. The third threat is the shift of social norms towards the permissibility of being watched. Resources to cope with this challenge can be found in the complementation of an individual reading of privacy as a right and a value by a collective one, which follows a primarily socio-economic trend to consider privacy as a public good.
The Legitimacy of the Bolshevik Order, 1917-1918: Language Usage in Revolutionary Russian Law
Borisova T. Y. Law. LAW. Высшая школа экономики, 2012. No. 05.
The article describes and analyzes the legislative politics of revolutionary regimes in Russia in 1917-1918. The author aims to demonstrate the political meaning of the form of early Soviet legislation and its legitimizing effect. The revolutionary legislators often used specific language in the new laws as a vehicle of legitimacy, i.e. to make the people comply. The two main types of legal language used by the Bolsheviks can be interpreted from the perspective of different types of legitimacy. The revolutionary strategy used propagandistic legislation, written in the language of lay people, which urged them to act according to the new law. It can be seen as a request for acts of the people to legitimize the soviets. On the contrary, the traditional strategy employed old bureaucratic means of writing and distributing legislation to the local soviets. The language used by this strategy was closed to the understanding of a lay audience and implied traditions of obeying the law written in familiar legal language, which in turn implied rational/legal legitimacy. The second strategy had already become dominant after the first months of the Bolshevik revolution. This observation demonstrates that from the very beginning of their rule, Soviet leaders approached legislative policy from a technocratic point of view, which determined the further development of Soviet legal theory and practice.
Abelian automorphism groups of cubic fourfolds
Mayanskiy E. arxiv.org. math. Cornell University, 2013. No. 5150.
We list all finite abelian groups which act effectively on smooth cubic fourfolds.
Использование временных характеристик в преподавании курса "Юридическая техника"
Тенилова Т. Л. Юридическая техника. 2009. № 3. С. 309-316.
Конституция Российской Федерации как фактор укрепления экономического и социального правопорядка на новом этапе решения стратегических задач (к 15-летию принятия): Материалы региональной научно-практической конференции (Нижний Новгород, 12 декабря 2008 года)
Edited by: В. М. Баранов, П. Н. Панченко, А. В. Козлов Т. 1. Н. Новгород: Нижегородский филиал НИУ ВШЭ, 2009.
Некоторые проблемы Конституции Российской Федерации
Лукьянова Е. А. Конституционное и муниципальное право. 2007. № 15. С. 4-9.
Особенности правового статуса Контрольно-счетной палаты Санкт-Петербурга
Янкевич С. В. Право и экономика. 2013. № 7. С. 55-62.
Ценности России в системе ценностей мира и контексте задач экономико-правового обеспечения их создания, накопления, сбережения, рационального использования, приумножения и приращения: Материалы всероссийской научно-практической конференции (Нижний Новгород, 22 апреля 2010 года)
Edited by: П. Н. Панченко, А. В. Козлов Т. 1. Н. Новгород: ООО "Стимул-СТ", 2010.
Russian Competition law in light of the principles of ex post and ex ante
Totyev K. Y. Law. LAW. Высшая школа экономики, 2014
This article is devoted to the legitimation and application of the standards of ex post and ex ante by courts and the executive authorities in the sphere of competition regulation. The postulates of ex post and ex ante are considered as legal principles. The principle of ex post is intended solely for judicial and administrative application; it has a deontological framework; it assumes that the legality of the activity of economic entities is assessed only on the basis of positive legal criteria in terms of the subjective rights violated; it is limited to a particular case. The traditional approach to the principle of ex post limits the scope of its application on the subjects and excessively expands its objects. The postulate of ex ante has a utilitarian basis which assumes the assessment of the application of relevant rules in the future. One of the main aims of the article is to refute the common view of lawyers and economists that a legislator applies principle of ex ante not being bound by principle of ex post, while it is the other way around for the courts and the executive authorities. The principle of ex ante may be applied not only in the process of the creation of new rules but also at the application stage for existing rules on economic competition. This is justified because the arguments of the courts and the executive authorities about a refusal to take into account the consequences of a decision in a particular case are not convincing.
Кодификация законодательства: теория, практика, техника: Материалы Международной научно-практической конференции (Нижний Новгород, 25–26 сентября 2008 года)
Edited by: В. М. Баранов, Д. Краснов Н. Новгород: Нижегородская академия МВД России, 2009.