The collection of articles by Russian scholars focuses on the positive changes on the Korean Peninsula that occurred during 2018. The results of the North Korean leader's summits with the leaders of China, the USA and South Korea held in 2018 are analyzed. The impact of these meetings on the prospects of resolving the nuclear issue of the Korean Peninsula is considered. The problems of creating a new mechanism for maintaining peace on the peninsula, taking into account the security interests of Russia, are studied. The issues of relations between the two Korean states and their neighbors in the NEA region are considered. Much attention is given to the state and prospects of trade and economic relations between the Republic of Korea and Russia, the analysis of some aspects of the experience of economic development of the ROK in terms of its use in Russia. Separate chapters are devoted to the issues of Korean historical and cultural heritage and its connection with the modern days, in particular, to the 100th anniversary of the March 1st movement of 1919 for the independence of Korea. The book was prepared on the basis of papers presented at the 23rd Conference of Russia and CIS Koreanists, held on March 28-29, 2019 in Moscow with support of the Academy of Korean Studies, the Republic of Korea (Grant AKS-2018-C-15).

Chapters
Общенациональный характер Первомартовского движения и его влияние на историю Кореи
Kim E. U., В кн. : Корейский полуостров в поисках мира и процветания. Т. 2.: ИДВ РАН, 2019. С. 9-21.
The March First Movement of the Korean people against the Japanese colonial rule was not the first or the last. It was born as a protest against Japan's most brutal colonial policy in Korea. And it also relied on the traditions of the struggle of predecessors. Each part of the population, each class in its ...
Research target: History and Archeology Humanities
Priority areas: humanitarian
Language: Russian
Full text
Text on another site
Keywords: культурное наследиеКореяKoreacultural heritageколониализмcolonialismистория Кореикорейская литератураKorean literatureHistory of Koreaискусство КореиKorean Art 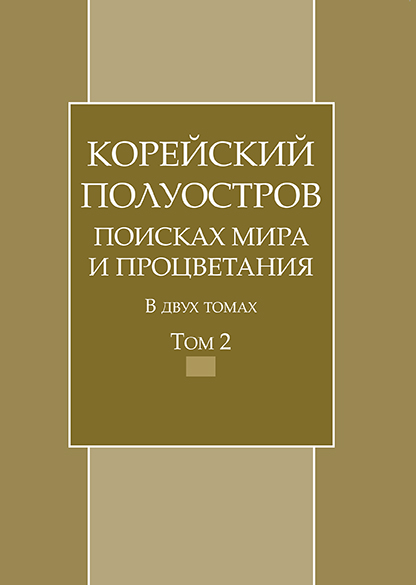