The textbook is a complete introductory course in actuarial mathematics. The basic concepts of insurance and actuarial calculations, financial mathematics and demographic statistics are revealed. The principles and definitions of insurance, the tasks of actuarial calculations, the structure of the insurance premium and the main approaches to its calculation, methods of forming insurance reserves in insurance other than life insurance, life insurance and pensions are considered. The theoretical material is illustrated with numerous examples and tasks, in addition, an extensive set of tasks for seminars and independent work of students is offered. The textbook contains questions and tasks for self-control on all topics. The appendices include mathematical-statistical and demographic tables that are necessary for performing independent calculations and solving problems. 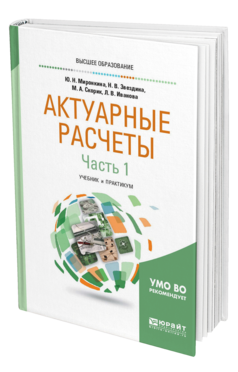 A singular boundary value problem for a second order linear integrodifferential equation with Volterra and nonVolterra integral operators is formulated and analyzed. The problem arises in the study of the survival probability of an insurance company over infinite time (as a function of its initial surplus) in a dynamic insurance model that is a modification of the classical Cramer–Lundberg model with a stochastic process rate of premium under a certain investment strategy in the financial market.

МАТЕМАТИЧЕСКОЕ И КОМПЬЮТЕРНОЕ МОДЕЛИРОВАНИЕ В ЭКОНОМИКЕ, СТРАХОВАНИИ И УПРАВЛЕНИИ РИСКАМИ Материалы V Международной молодежной научно-практической конференции
Edited by: В. А. Балаш, С. П. Сидоров, С. И. Дудов Саратов: ООО "Издательство "Научная книга", 2016.
Особенности формирования спроса на страховой продукт
Юрик М. К. В кн.: Научно-техническая конференция студентов, аспирантов и молодых специалистов МИЭМ. Тезисы докладов, 2004. М.: МИЭМ, 2004. С. 537-539.
Risk as a good
Penikas H. I., Vasilyeva K., Selmier II W. T. Addressing the Complexities of Property Rights in Financial Markets. Indiana University, 2013. No. W13–11.
The recent financial crisis has once again shown us that our knowledge of the financial sphere is insufficient to manage, let alone control, these types of crises. The concept of risk is a crucial pillar in that sphere, and this paper aims to present an alternative paradigm of risk to mitigate future financial crises. Our key point is that risk is not simply a feature of a financial product, it is a good itself. We discuss stylized facts to examine the complexity of risk and how it may be typed as a good depending on the scale of its impact and initial conditions. Our principal conclusions are first, that risk is most accurately typed as a common-pool resource (particularly systemic risk) and so another approach to pricing risk is needed.  Second, for more effective governance, risk-loving agents need to contribute to a quasi-insurance fund. We outline the basics of this insurance fund and sketch its mechanism. Insurance recipients are risk-averse agents who do not contribute as they are forced to participate in systemic risk-taking against their preferences.
Страхование в России сегодня
Юрик М. К. В кн.: Научно-техническая конференция студентов, аспирантов и молодых специалистов МИЭМ, 2003. Тезисы докладов. М.: МИЭМ, 2003. С. 454-455.
Pareto Optimality and Equilibrium in an Insurance Market
Golubin A. Y. ASTIN Bulletin. 2008. Vol. 38. No. 2. P. 441-460.

The concept of economic equilibrium under uncertainty is applied to a model of insurance market where, in distinction to the classic Borch's model of a reinsurance market, risk exchanges are allowed between the insurer and each insured only, not among insureds themselves. Conditions characterizing an equilibrium are found. A variant of the conditions, based on the Pareto optimality notion and involving risk aversion functions of the agents, is derived. An existence theorem is proved. Computation of the market premiums and optimal indemnities is illustrated by an example with exponential utility functions.