As a tribute to their academic teacher and to further his interests, the students of Prof. Dr. Laurent Waelkens collected fifteen scholarly contributions on ius commune graeco-romanum, written by academics from eleven different countries, mainly but not exclusively from Eastern Europe. The book consists of three main parts. In the first part, four authors focus on the Graeco-Roman law in the Roman Empire itself. In the second part, five contributions concern the influence of Graeco-Roman law outside of the Byzantine Empire. The six contributions of the third and final part study the impact of the Western ius commune tradition on Eastern European countries. Thus, the volume highlights the continued importance of the study of Roman law for the understanding of our common pan-European legal heritage.

Chapters
Byzantine Roman law studies in Russia within the framework of political ideologies
Poldnikov D., , in : 'Ius commune graeco-romanum' : essays in honour of Prof. Dr. Laurent Waelkens. : Leuven : Peeters, 2019. Ch. 9. P. 147-164.
Legal scholarship is often presented as an objective impartial knowledge of what the law is or was. Yet the role of ideologies in its interpretation should not be underestimated, especially in writing and rewriting foreign and national legal history. Remarkable Byzantine studies in Russia, their rise, fall and revival, could be a good example to ...
Research target: Law History and Archeology
Priority areas: law
Language: English
Sample Chapter
Text on another site
Keywords: Roman lawримское правосредневековое римское правоius communeAncient Roman Historyистория Римаius communemedieval Roman lawRoman Byzantine lawримско-византийское право 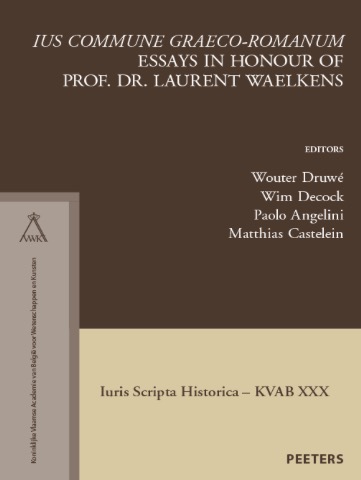