This book critically examines the Left Opposition in the Bolshevik party. This group, which is widely known as the “Trotskyist Opposition”, began to form in 1923–1924, when the Party experienced a severe political conflict that took the form of a public confrontation between two political trends related to issues of intra-party practice and economic policies. These problems of party and government leadership led to the friction and then split the party in 1926–1928. Already by 1923 the majority of members of both the Central Committee and the Opposition had become the ideological and organizational cores of their respective groups, which then combined into stable or situational coalitions. In examining these processes, the author addresses key issues of the Soviet political history of the 1920s. The book draws on significant new archival research and offers an anthropological approach to understanding the political culture of the Early Soviet era. Moving beyond conventional explanations of the struggle for power in the USSR, the author focuses not only on the Leon Trotsky and his primary foes from the Party (Stalin, Zinoviev and others), but also reconstructing the opposition as the complex phenomena, which exposes how broad political communication functioned in the limited space of the Soviet politics. 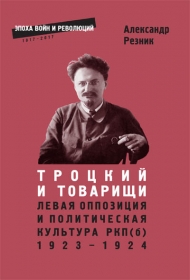