Patriotic Education in Contemporary Russia: Sociological Studies in the Making of the Post-Soviet Citizen 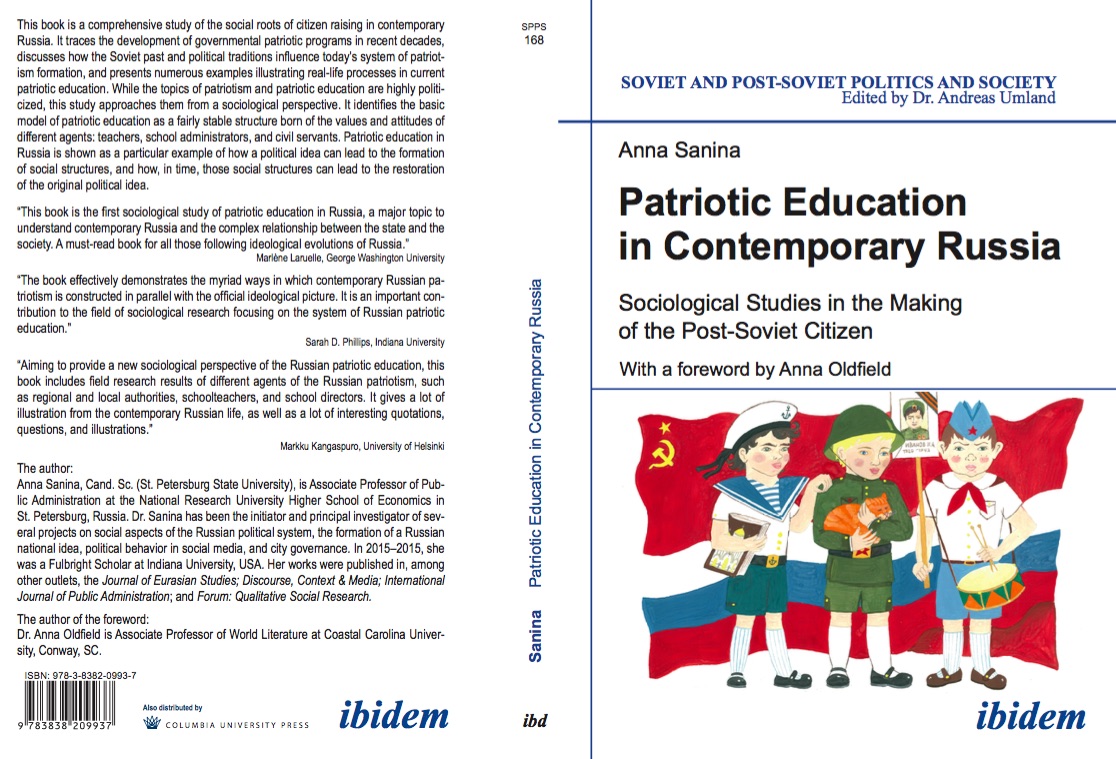 The capter is dedicated to the description of the fragmentation of the Russian media-based public sphere, in particular - to the dymanics of media use of the participants of the 'For fair elections' political protest movement in Russia of 2011-2012. Authors counclude that: 1) socio-economic divisions in today's Russia are mirrored in the media use patterns; 2) traditional textocentricism of Russian intelligentsia shows up and shapes media preferences and opinion leading: 3) changes in political behavior online (weakly) correlates with differences in online media use patterns; 4) a nation-wide public counter-sphere has formed in the Russian big cities. A prediction is made that fragmentation of the Russian public sphere will be deepening.

Tools of Government for Support of SONPOs in Russia: In Search of Cross-Sector Cooperation in the Delivery of Social Services
Benevolenski V. Public Administration. PA. Высшая школа экономики, 2014. No. WP BRP 17/PA/2014.
This paper discusses the set of tools of government enacted in 2009–2013 in Russia to provide support to socially oriented nonprofit organizations (SONPOs). The discussion evaluates the new tools within the context of international comparisons. In particular the comparisons concern the definition of SONPOs as a subpopulation of the nonprofit sector, the economic dimension of the tool kit and the combination of the support measures as a means to foster cross-sector cooperation in the delivery of social services. Worldwide cross-sector partnership in the delivery of social services is used by governments to engage the resources of civic organizations in the implementation of social policy. NPOs quite readily accept government support and espouse participatory approaches considering such approaches as instrumental in pursuit of their social missions. In Russia this approach is considered a serious policy innovation since government policy to date vis-à-vis the nonprofit sector could be described as either indifferent or predominantly restrictive. The conceptual framework employed for our discussion is based on the explanation of the role played by nonprofit organizations and of the motivation for cooperation between the state and NPOs in the supply of public goods provided by the theory of “market / government / voluntary failure” and on the tools of government approach developed by Salamon. We first consider the legal definition of the subsector of SONPOs, and then investigate the newly introduced tools of government support featuring data on the scope of Russian federal government support for SONPOs. Our discussion focuses on international comparisons, showing substantial similarity to government tool kits employed to support NPOs elsewhere in the world.
О культурной самоидентификации как основе воспитания патриотизма
Абелюк Е. С., Кармакова О. Е. В кн.: Музейная педагогика и проблемы патриотического воспитания. Материалы научно-практической конференции. М.: НИИРО, 2004.
Школьное образование в Российской Федерации
Ечкова В., Валтерова Е., Abankina T. et al. Издательство Карловского Университета, 2013.

Dramatic political, socio-economic, and cultural transformation of  Russia in recent decades are often compared to the reforms of Peter the  Great. The ongoing reform of education, which is part of the changer, attracts international attention. There have been voices within the Czech: pedagogical public, growing in intensity in the past few years, pointing out the lack of information on the development of education in Russia after the collapse of the Soviet Union, on the transformation of the educational system, and on the problems solved by politicians, experts, as  well as school practice in the multi-ethnic and multi-national state. These  problems may be of interest not only to the witnesses of the era of Soviet pedagogy and intensive work and personal contacts with its representatives, but also to the younger generation of teachers and researchers. The aim of the publication is to draw attention to education in the  Russian Federation, providing the Czech educational community, professionals, and the general public with up-to-date information, as well as documenting, from a critical-analytical perspective, the development, current situation, and trends in Russian schooling.

The paper discusses recent initiatives undertaken by the Russian Government that are aimed to attract highly qualified foreign specialists to Russian higher education institutions. The authors describe obstacles that both institutions and specialists face. Best practices to attract leading scientists used in various countries are identified.

The article is devoted to the spiritual and moral education (SME). Along with the author's concept of SME, an overview of axiological attitudes and orientations, an approximate set of principles, mechanisms and conditions of the spiritual and moral development of children in school is presented. The attention is paid also to the issues that cause heated debate such as religious education, the reincarnation of the traditional meaning of "spirit" and "spirituality". The need to match activities on the spiritual and moral education with a new vector of Russia's historical development that was firstly and foremost constitutionally elected and suffered in the turmoil and tragedies of Russia in the XX century. The article emphasizes that SME is the mandatory (number one) task of the school, society and state. Solving this task may indeed lead to the basic axiological consensus and spiritual revival of Russia