Soyons Logiques / Let Us Be Logical

“Let's be Logical” is a double invitation. Although logic often refers to a disposition of mind that we all share, this disposition might be confused once its theoretical sources are questioned. The present volume offers thirteen articles that address various aspects of the discipline of logic and its methods, notably formalism, the theory of opposition, mathematical truth, and history of logic. This volume has been prepared with the pedagogical concern of making it accessible to a wide audience of logic and philosophy readers.

The aim of the present paper is twofold. On the basis of Frege's "Sense and Denotation", to compare two competing theories of meaning, namely: a one-sorted semantics à la Frege, where every sign symbolizes uniformly; a two-sorted semantics à la Kripke, where a distinction can be made between two modes of functioning among these entities. Then to depict Hintikka's epistemic logic as an internalization of sense, that is, a calculus by means of the operations leading to Frege's theory of meaning. 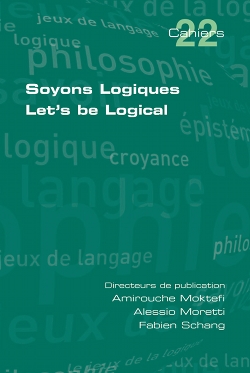 Free Speech in Plato’s Gorgias
Gloukhov A. Humanities. HUM. Basic Research Programme, 2016. No. WP BRP 121/HUM/2016.
As this new reading of Plato’s Gorgias shows, four distinct positions with regard to freedom of speech are introduced in this classical text on the relations between philosophy and rhetoric: two realistic and two logical. The realism of rhetoric poses the key political problem of incommensurability between freedom and justice. The realism of philosophy is able to solve this problem, but only through a mediatory differentiation of two purely logical stands, which might have found direct counterparts in the two dominant forms of political philosophy in the 20th century. One of them is political liberalism, which corresponds to the ‘geometric’ way of argumentation in ‘Gorgias’ and inevitably passes into a theory of normative justice. Another is the mainstream ‘continental’ philosophy, which corresponds to the ‘erotic’ way of argumentation in Gorgias and explores the possibilities of the positive freedom.
Проблема возможных миров в философии Лейбница
Крючкова С. Е. В кн.: Возможные миры. Семантика, онтология, метафизика. М.: Канон+, 2011. С. 114-142.

Тождество, истина и парадокс анализа
Горбатов В. В. В кн.: Язык философии: традиции и новации. Материалы межвузовской конференции Москва, 7–8 декабря 2010 г.. М.: РГГУ, 2010. С. 34-41.
Чем в «Трактате» не является «Этика»
Конант Дж. В кн.: Трансцендентное в современной философии: направления и методы. СПб.: Алетейя, 2013. С. 340-369.
Современная логика: основания, предмет и перспективы развития
М.: ИД "Форум", 2018.
Reading Passages For The Course Of Semantics: Tests For Students
Partee B., Vinogradova O. I. Linguistics. WP BRP. НИУ ВШЭ, 2014. No. WP BRP 08/LNG/2014.
The objective of this paper is to present and describe a teaching tool for linguistics students who are learning English, a tool which furthers their linguistic education at the same time as it gives them some challenging experience with reading practice with the kinds of tests they will encounter in the main international English language examinations, mainly, IELTS and TOEFL, and with English academic writing. The selected reading material introduces the foundations of formal semantics through a set of extracts from the works of classical semanticists of the 20th century, accompanied by a set of test-type questions for each of the reading passages. The comments after each test outline the characteristic features of test types presented. The importance of advancement in students’ reading potential is highlighted as crucial for their academic life in general and for their overall performance in English.
Dialogue Games dor Dishkant's Quantum Modal Logic
Vasyukov V. L. Logical Investigations. 2013. No. 19. P. 353-365.

Recently some elaborations were made concerning the game theoretic semantic of Lℵ0 and its extension. In the paper this kind of semantics  is developed for Dishkant’s quantum modal logic LQ which is also, in fact, the speciﬁc extension of Lℵ0 . As a starting point some game theoretic interpretation  for the S L system (extending both Lukasiewicz logic Lℵ0 and modal logic S5) was exploited which has been proposed in 2006 by C.Ferm˝uller and R.Kosik . They,  in turn, based on ideas already introduced by Robin Giles in the 1970th to obtain  a characterization of Lℵ0 in terms of a Lorenzen style dialogue game combined with bets on the results of binary experiments that may show dispersion.

Squares of modal logics with additional connectives
Shehtman V. B. Russian Mathematical Surveys. 2012. Vol. 67. No. 4. P. 721-777.
This paper studies two-dimensional modal logics of a special type, 'Segerberg squares'. They are defined as the usual squares of modal logics with additional connectives corresponding to the diagonal symmetry and the two projections onto the diagonal. For these logics a finite axiomatization is constructed in many cases, and completeness and the finite model property are proved. A translation of Segerberg squares into classical predicate logic is constructed. Bibliography: 21 titles.
Positive provability logic for uniform reflection principles
Beklemishev L. D. arxiv.org. math. Cornell University, 2013. No.  arXiv:1304.4396.
We deal with the fragment of modal logic consisting of implications of formulas built up from the variables and the constant `true' by conjunction and diamonds only. The weaker language allows one to interpret the diamonds as the uniform reflection schemata in arithmetic, possibly of unrestricted logical complexity. We formulate an arithmetically complete calculus with modalities labeled by natural numbers and \omega, where \omega corresponds to the full uniform reflection schema, whereas n<\omega corresponds to its restriction to arithmetical \Pi_{n+1}-formulas. This calculus is shown to be complete w.r.t. a suitable class of finite Kripke models and to be decidable in polynomial time.
Logical Investigations
Edited by: А. С. Карпенко. Vol. 19: Special Issue. M.; St. Petersburg: humanitarian initiatives center, 2013.