We consider the problem of planning the ISS cosmonaut training with different objectives. A pre-defined set of minimum qualification levels should be distributed between the crew members with minimum training time differences, training expenses or a maximum of the training level with a limitation of the budget. First, a description of the cosmonaut training process is given. The model are considered for the volume planning problem. The objective of the model is to minimize the differences between the total time of the preparation of all crew members. Then two models are considered for the timetabling planning problem. For the volume planning problem, two algorithms are presented. The first one is aheuristic with a complexity of O(n) operations. The second one consists of a heuristic and exact parts, and it is based on the n￾partition problem approach.

A railway connection of two stations by a single railway track is usually found on branch lines of railway network and is very common in various manufacturing supply chains. Our paper isДля книг на иностранных языках concerned with a scheduling problem for two stations with a single railway track with one siding. On single-track railway sidings or passing loops are used to increase the capacity of the line. In our paper we developed exact optimization algorithm by analysing the structure of optimal schedule for the proposed model. The algorithm produces a schedule that completes all transportations between two stations at minimal time. We present algorithm to construct an optimal schedule in O(1) operations. Optimal schedule analyse allows the development of exact optimization algorithms with other models and objective functions, i.e. results can be generalized and used in future work for a number of regular objective functions, commonly used in scheduling. 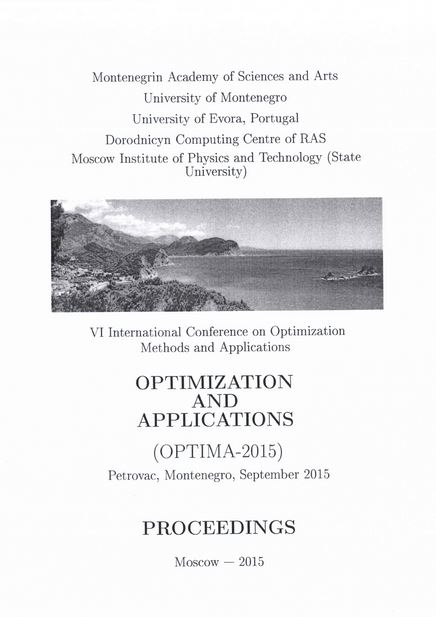 A Modification of Dynamic Programming Algorithms to Reduce the Running Time or/and Complexity
Gafarov E., Lazarev A. A., Werner F. Otto-von-Guericke Universitaet, 2010. No. 20.
In this paper, we present a modification of dynamic programming algorithms (DPA), which we denote as graphical algorithms (GrA). For the knapsack problem and some single machine scheduling problems, it is shown that the time complexity of the GrA is less that the time complexity of the standard DPA. Moreover, the average running time of the GrA is often essentially smaller. A GrA can also solve largescale instances and instances, where the parameters are not integer. In addition, for some problems, GrA has a polynomial time complexity in contrast to a pseudo-polynomial complexity of DPA.
Свойства оптимальных расписаний задачи теории расписаний минимизации суммарного взвешенного момента окончания для одного прибора
Лазарев А. А., Кварацхелия А. Г. Автоматика и телемеханика. 2010. № 10. С. 80-89.

A Polynomial Time Graphical Algorithm for Maximizing Total Tardiness on a Single Machine
Gafarov E., Lazarev A. A., Werner F. Otto-von-Guericke Universitaet, 2010. No. 12.
In this paper, we consider the problem of maximizing total tardiness on a single machine, where the first job starts at time zero and idle times between the processing of jobs are not allowed. We present a modification of an exact pseudo-polynomial algorithm based on a graphical approach, which has a polynomial running time.
Finite element error analysis for measure-valued optimal control problems governed by a 1D wave equation with variable coefficients
Trautmann P., Vexler B., Zlotnik A. Working papers by Cornell University. Cornell University, 2017. No. 1702.00362.
This work is concerned with the optimal control problems governed by the 1D wave equation with variable coefficients and the control spaces $\mathcal M_T$ of either measure-valued functions $L^2(I,\mathcal M(\Omega))$ or vector measures $\mathcal M(\Omega,L^2(I))$. The cost functional involves the standard quadratic terms and the regularization term $\alpha\|u\|_{\mathcal M_T}$, $\alpha>0$. We construct and study three-level in time bilinear finite element discretizations for the problems. The main focus lies on the derivation of error estimates for the optimal state variable and the error measured in the cost functional. The analysis is mainly based on some previous results of the authors. The numerical results are included.
Экономика и управление: вопросы оптимизации: Материалы международной научно-практической конференции, г. Волгоград, 17-18 мая 2010 г.
Ч. 2. Волгоград: Волгоградское научное издательство, 2010.
Procurement system for distribution company on global level
Сабаткоев Т. Р., Султанов Р. Р. В кн.: Flexibility and adaptability of global supply chains. СПб.: 2012. С. 147-153.

The problem of minimizing the root mean square deviation of a uniform string with clamped ends from an equilibrium position is investigated. It is assumed that the initial conditions are specified and the ends of the string are clamped. The Fourier method is used, which enables the control problem with a partial differential equation to be reduced to a control problem with a denumerable system of ordinary differential equations. For the optimal control problem in the l2 space obtained, it is proved that the optimal synthesis contains singular trajectories and chattering trajectories. For the initial problem of the optimal control of the vibrations of a string it is also proved that there is a unique solution for which the optimal control has a denumerable number of switchings in a finite time interval.

In this paper, we construct a new distribution corresponding to a real noble gas as well as the equation of state for it.