In the third edition of the textbook light out the issues of modern constitutional law of Russia. It has been prepared in accordens with educational standerts. It is recomended to students and teachers of law faculties, political scientists, economists, experts of the public administration 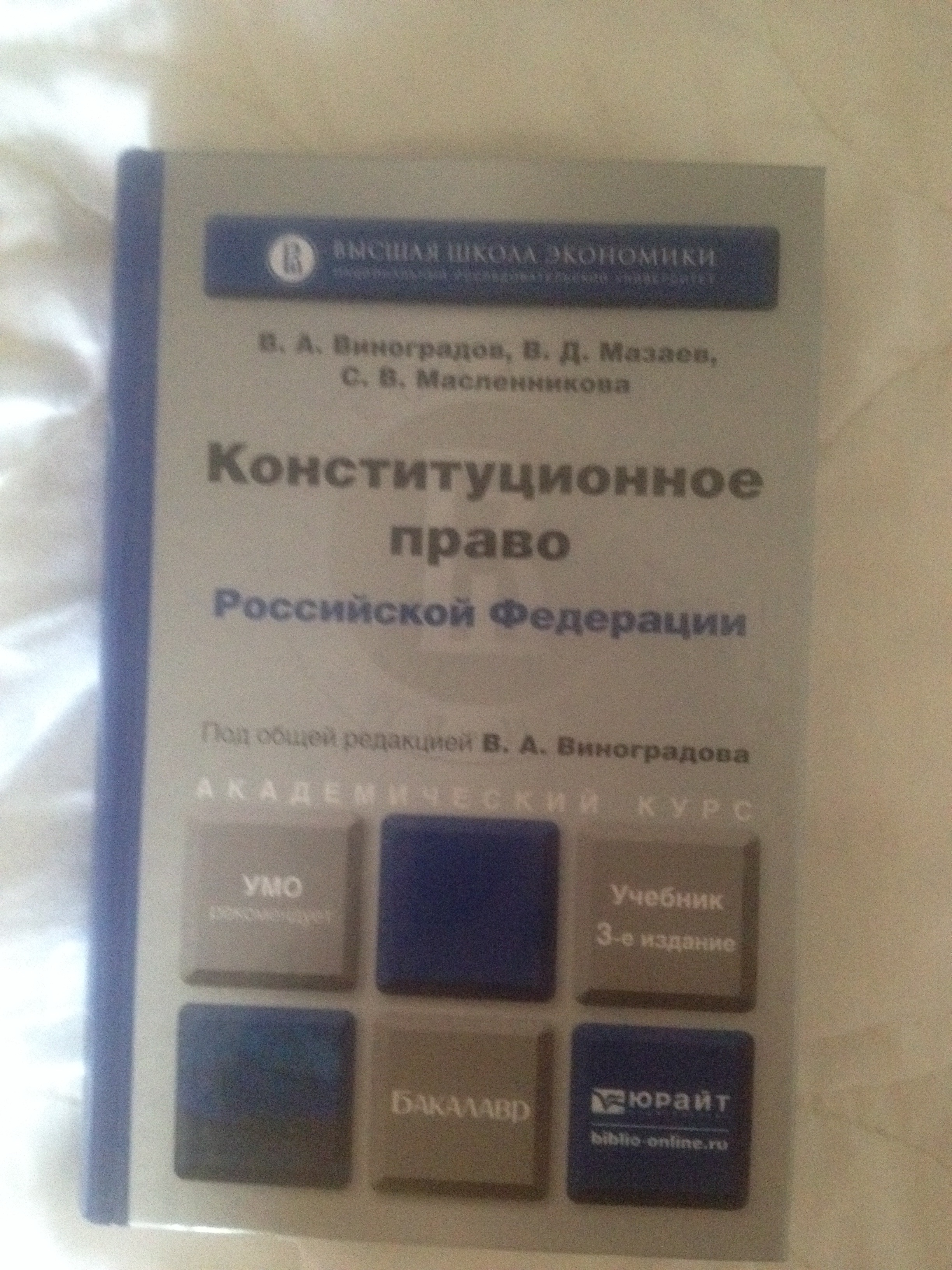 Similar publications
Экономические и социальные аспекты российского конституционализма
Вып. 4. М.: ТЕИС, 2009.
The Eurasian Economic Union: An EU-Like Legal Order in the Post-Soviet Space?
Karliuk M. Law. LAW. Высшая школа экономики, 2015. No. WP BRP 53/LAW/2015.
The Eurasian Economic Union (EAEU) is an emerging regional organization of economic integration in the post-Soviet space. Following the limited success of previous integration attempts, it seeks to pursue deeper integration, borrowing features from the EU. The EAEU possesses a complex system of elements of an emerging legal order, some of which have distinct similarities with the EU, but others are decisively different. This paper analyses these features in order to find whether the legal changes that accompany the creation of the new entity allow ensuring the effective functioning of the EAEU and whether the respective legal order is autonomous similar to that of the EU. The author argues that the EAEU lags behind the EU in terms of the autonomy of the legal order and in its ability to ensure the effective functioning of the organization. Supranational features are limited, while it relies predominantly on intergovernmental elements with a view to preserve the interests of all Member States.
The Legitimacy of the Bolshevik Order, 1917-1918: Language Usage in Revolutionary Russian Law
Borisova T. Y. Law. LAW. Высшая школа экономики, 2012. No. 05.
The article describes and analyzes the legislative politics of revolutionary regimes in Russia in 1917-1918. The author aims to demonstrate the political meaning of the form of early Soviet legislation and its legitimizing effect. The revolutionary legislators often used specific language in the new laws as a vehicle of legitimacy, i.e. to make the people comply. The two main types of legal language used by the Bolsheviks can be interpreted from the perspective of different types of legitimacy. The revolutionary strategy used propagandistic legislation, written in the language of lay people, which urged them to act according to the new law. It can be seen as a request for acts of the people to legitimize the soviets. On the contrary, the traditional strategy employed old bureaucratic means of writing and distributing legislation to the local soviets. The language used by this strategy was closed to the understanding of a lay audience and implied traditions of obeying the law written in familiar legal language, which in turn implied rational/legal legitimacy. The second strategy had already become dominant after the first months of the Bolshevik revolution. This observation demonstrates that from the very beginning of their rule, Soviet leaders approached legislative policy from a technocratic point of view, which determined the further development of Soviet legal theory and practice.
Алгебра и начала математического анализа, 10-11 классы, базовый уровень. Часть 1. Учебник
Семенов П. В., Мордкович А. Г. Ч. 1: Учебник. М.: Мнемозина, 2016.
Theoretical Issues of Sovereignty in Russia
Antonov M. Law. LAW. Высшая школа экономики, 2012. No. 02.
This paper studies the background and guidelines of discussions about the concept of sovereignty and its limits. The paper begins with a short historical analysis of the processes that took place in Soviet Russia that led to the “parade of sovereignties” in the early 1990s. Afterwards, the author sketches the different approaches and doctrines upheld by the Constitutional Court of Russia in several decisions concerning sovereignty problems. The paper focuses on the vertical dimension of sovereignty, i.e. on different conceptions adopted by the federal and regional powers in postSoviet Russia regarding the legal status of the member-republics of the Russian Federation. The development of the doctrine of the Constitutional Court of Russia in this matter is quite illustrative as to the legal arguments used to protect the integrity of the Russian Federation against the diverse disintegrative strategies pursued by the regions.
1812: tra Cadice e Palermo - entre Cadiz y Palermo: Nazione,rivoluzione e constituzione. Rappresentanza politica, liberta garantite, autonomie
Edited by: A. Romano, F. V. Caffarelli. Messina: Biblioteca centrale della Regione siciliana "Alberto Bombace", 2012.
The book consists of chapters (articles) devoted the South-European constitutionalism of 1812, when two constitutions were adopted (in Spain and Sicily). Napoleon at that time not only won a few countries, but founded new states, gifted constitutions to some new and old states.   Adoptions of constitutions in Cadiz and in Palermo in 1812, were events of extraordinary importance. They demonstrated a protest against Napoleonic wars and defense the right of nations to decide their future and way of development.
Influenze della Costituzione de Cadice sui primi progetti costituzionali in Russia.
Alexeeva T. A. In bk.: 1812: tra Cadice e Palermo - entre Cadiz y Palermo: Nazione,rivoluzione e constituzione. Rappresentanza politica, liberta garantite, autonomie. Messina: Biblioteca centrale della Regione siciliana "Alberto Bombace", 2012. P. 37-54.

Выключенный механизм:сдержки и противовесы в российской конституционной практике
Шаблинский И. Г. Сравнительное конституционное обозрение. 2010. № 2. С. 107-115.
Russian Constitutional Development: Formal and Informal Practices
Medushevsky A. N. Political Science. PS. Высшая школа экономики, 2015. No. WP BRP 27/PS/2015 .
Transitional constitutionalism remains the subject of intensive political controversies. On the ground of the Project realized by the Institute of Law and Public Policy (Moscow) this article presents the analysis of the basic constitutional principles (pluralism, separation of powers, federalism, independence of justice, the guarantees of political rights and freedoms) describing the changing character of their implementation in different areas of constitutional practices – legislation, constitutional justice, administrative activity and informal practices and the comparative level of constitutional deviations in each of them. The important new acquirement of this research is the concept and methodology of the constitutional monitoring and recommendations for the full-scale reforms in key areas of Russian constitutional and political settlement. The author shows that the true choice of modern society is not the dilemma - constitutionalism versus its negation but the choice between real and sham constitutionalism with a big variety of intermediate options between them. It is precisely the area, which the author defines as a transitional type of constitutionalism, the field of collision of different political stakeholders. This is an area of unstable equilibrium where the implementation of different legal strategies and technologies may produce a definitive effect.
Конституализация уголовного законодательства Российс кой Федерации
Савюк Л. К. В кн.: Новейшие IT-технологии: модернизация аграрного образования и внедрения инноваций в АПК. Материалы международной научно-практической конференции 1-3 июля 2011 г.. Якутск: ГОУ ДПО РС (Я) «ИРОиПК», 2011. С. 172-179.
Ограничительные условия дистрибьюторских соглашений как пример «отрицательных» обязанностей в гражданском праве России
Партин А. М. Законы России: опыт, анализ, практика. 2010. № 7. С. 100-105.

About the Russian Federation Court System: its current state and future development prospects.The author analyses the current state of the Russian Court System and its future development prospects in the article. A whole number of measures concerning the Court System development is proposed. These measures include: clear definition of «the Court System» notion; organization of the separate second instance Courts for magistrates in the regional centres; the domestic constitutional justice arrangement; inter-regional and district Courts creation. The legality of restrictive provisions of distribution agreements under Russian civil legislation is frequently disputed by lawyers. However treatment of these provisions as an example of negative obligations may be used as an argument for their validity. Moreover the answer to the question, whether such provisions should be found as restricting legal capacity of the parties to the agreement or not, depends on the level of certainty of these provisions in the agreement.