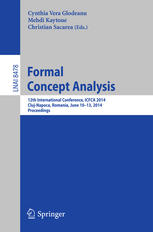 A novel approach to triclustering of a three-way binary data is proposed. Tricluster is defined in terms of Triadic Formal Concept Analysis as a dense triset of a binary relation Y , describing relationship between objects, attributes and conditions. This definition is a relaxation of a triconcept notion and makes it possible to find all triclusters and triconcepts contained in triclusters of large datasets. This approach generalizes the similar study of concept-based biclustering.

The problem of detecting terms that can be interesting to the advertiser is considered. If a company has already bought some advertising terms which describe certain services, it is reasonable to find out the terms bought by competing companies. A part of them can be recommended as future advertising terms to the company. The goal of this work is to propose better interpretable recommendations based on FCA and association rules.

The consideration of symbolic machine learning algorithms as an entire class will make it possible, in the future, to generate algorithms, with the aid of some parameters, depending on the initial users’ requirements and the quality of solving targeted problems in domain applications.

Diagnostic Test Approaches to Machine Learning and Commonsense Reasoning Systems surveys, analyzes, and compares the most effective algorithms for mining all kinds of logical rules. Global academics and professionals in related fields have come together to create this unique knowledge-sharing resources which will serve as a forum for future collaborations.