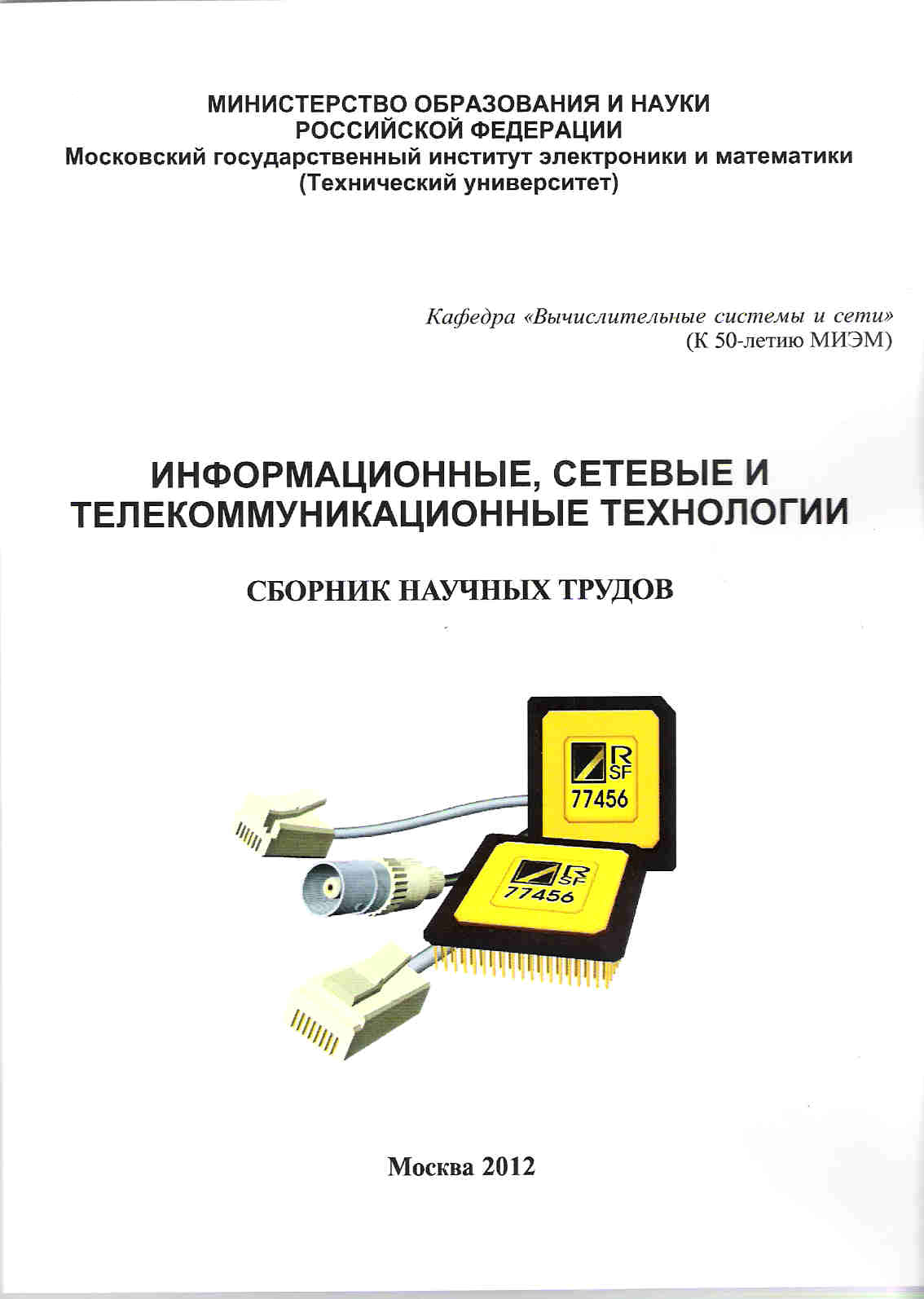 The paper describes the method of finite element simulation of shape rolling process based on 2,5D techniques which is due to the number of simplifications, allows to increase the rate of calculation considerably (by comparison with 3D modeling). To verify this technique the comparison of model results with data obtained at the metallurgical plant Trinecke Zelezarny within the special industrial testing was performed. The comparison confirmed the adequacy and effectiveness of the proposed models and computer system developed on their basis.

Proceedings of the 11-th International Workshop on Computer Science and Information Technologies CSIT’2009, Crete, Greece, October 5-8, 2009
Vol. 3. Ufa: 2009.
Research Teams’ Human Capital
Shmatko N. A. Science, Technology and Innovation. WP BRP. Высшая школа экономики, 2014. No. WP BRP 32/STI/2014 .
Adopting a Bourdieusian perspective, human capital of research team in the paper is understood as the configuration of the active properties of individual team’s members and the distribution of differences of their active properties. The paper describes a research team as an ensemble of social distinctions determined by a distribution of “active properties” of the team members (educational, research, administrative and media characteristics) and analyses their empirical distribution. The study is based on the consideration of sociological factors of research teams’ performance. The paper discusses in depth the performance of research team (from a sociological point of view) and the relationship between the performance and the social management efficiency. It is prouved that the performance depends on the efficiency of human capital management research team. These distributions show how holistic properties of the field develop, how they relate to individual agents’ properties and how individual researchers “fit” into science.
System Design and Analysis of UAV-Assisted BLE Wireless Sensor Systems
Komarov M. M., Moltchanov D. In bk.: Wired/Wireless Internet Communications. 14th IFIP WG 6.2 International Conference, WWIC 2016, Thessaloniki, Greece, May 25-27, 2016, Proceedings. Iss. 9674. Springer, 2016. P. 284-296.

Inefficiency of wireless sensor networks (WSN) in terms of the network lifetime is one of the major reasons preventing their widespread use. To alleviate this problem different data collection approaches have been proposed. One of the promising techniques is to use unmanned aerial vehicle (UAV). In spite of several papers advocating this approach, there have been no system designs and associated performance evaluation proposed to date. In this paper, we address this issue by proposing a new WSN design, where UAV serves as a sink while Bluetooth low energy (BLE) is used as a communication technology. We analyze the proposed design in terms of the network lifetime and area coverage comparing it with routed WSNs. Our results reveal that the lifetime of the proposed design is approximately two orders of magnitude longer than that of the routed WSNs. Using the tools of integral geometry we show that the density of nodes to cover a certain area is approximately two times more for routed WSNs compared to our design.

Mathematical modeling and energy conservation for rolling in passes
Chumachenko E. N., Aksenov S. A., Logashina I. V. Metallurgist. 2010. Vol. 54. No. 7-8. P. 498-504.
Energy conservation during hot shape rolling can be achieved by reducing of working temperature, optimization of rolling speed and calibration schedules, including a reduction of the passes number. For this, at the design stage of technology, it is necessary to produce a targeted search of the optimum characteristics associated with the large number of preliminary estimations and calculations. The speed of algorithms and techniques witch used in the process of the search plays a key role and directly determines its effectiveness. The paper describes the method of finite element simulation of shape rolling process based on «2,5 D» techniques, which is due to the number of simplifications, allows to increase the speed of calculation considerably (by comparison with 3D modeling). To verify this technique the comparison of model results with data obtained at a metallurgical plant «Třinecké železarny» in the special industrial experiment was performed. The comparison confirmed the adequacy and effectiveness of the proposed models and computer system developed on their basis.
Going Public: Empirical Study of Motives and Efficiency of IPO in CIS
Ivashkovskaya I., Ponomareva O. Journal of Corporate Finance Research. 2008. Т. 2. № 4. С. 5-22.
Методическое пособие по математической физиологии. Количественная оценка потребления кислорода человеком при физической работе. Часть 5
Иванов А. И., Исаков И., Демин А. В. и др. Ч. 5. М.: Слово, 2012.
Performance-Based Typology Of Universities: Evidence From Russia
Abankina I., Aleskerov F. T., Belousova V. et al. Science, Technology and Innovation. WP BRP. Высшая школа экономики, 2015. No. WP BRP 33/STI/2015.
In recent decades, increased economic pressure and growing societal expectations have led to the introduction of performance-based funding models of public research, namely universities. In this respect, universities have started to use various strategies to adapt and develop their activities under the new framework. National governments are currently attempting to design and apply various taxonomies for structuring university infrastructure in different ways in order to facilitate the development of efficient programmes for the advancement of higher education. This paper provides a review of different approaches to university typologies, discusses the choice of indicators and mathematical tools for grouping universities using common criteria and evaluating their performance based on classical and modified DEA approaches. The authors develop a typology which was tested in the Russian context, taking into account indicators of research and educational activities implemented by domestic universities and their efficiency score. The typology is based on clustering universities by the availability of resources and research and educational performance and the combination of these results with their efficiency score. It groups universities by type and includes a decision tree for classifying them taking into account their heterogeneity. It serves as a basis for the content analysis of a wide range of universities, and for shaping targeted policies aimed at particular groups.
Методическое пособие по математической физиологии. Количественная оценка влияния действия инертных газов на потребление кислорода человеком при физической работе. Часть 6
Иванов А. И., Демин А. В., Орлов О. Ч. 6. М.: Слово, 2012.
The firm size effect on performance due to intangible resources
Molodchik M., Fernandez-Jardon Fernandez C. M., Barajas A. Management. MAN. Высшая школа экономики, 2015. No. WP BRP 35/MAN/2015.
The paper explores the effect of firm size on the relation between intangible resources and companies’ performance (ROA). The authors identify six types of intangibles: human resources and management capabilities, innovation and internal process capabilities and customer loyalty and networking capabilities. The study provides econometric justification using a database of more than 1400 European public companies. The time period for the investigated data covers ten years from 2004 to 2013. A dummy regression analysis was applied for empirical testing. The findings revealed that the size of a company matters with regard to the employment of intangible resources and for a performance based on intangibles
Construction of Universities' Typology via DEA
Abankina I., Aleskerov F. T., Belousova V. et al. In bk.: Data Envelopment Analysis and its Applications. Proceedings of the 13th International Conference of DEA. Braunschweig: 2016. P. 25-33.

In recent decades, increased economic pressure and growing societal expectations have led to the introduction of performance-based funding models for universities. In this respect, a great scholarly attention has paid to how to evaluate universities performance correctly. This allows national governments to design and apply various taxonomies to facilitate the development of efficient programmes for the advancement of higher education. The wide spread approach used for that purpose is DEA. This paper provides a review of different approaches how to take into account universities heterogeneity when applying DEA to construct the typologies of  university by showing statistically their similarities and differences. The authors use the modified DEA proposed by Aleskerov & Petrushchenko (2013) to evaluate performance scores of Russian technical universities. This proposed typology divides universities into specific groups with a description taking into account their heterogeneity.

The paper provides a review of present-day studies on the problem of pilots’ performance in various flight conditions, with a focus on their methodology. Conceptual frameworks of the studies (concepts of working capacity, functional state and mental workload) are discussed, and different objective and subjective measures and methods used are described. Eye-tracking is regarded with special attention as a promising tool able to examine the internal mechanisms of pilots’ performance. The paper hints to the importance of systemic methodological approach to pilots’ performance assessment and proposes the direction for further research in the field of aviation psychophysiology.