At the moment of the Soviet Union’s breakup it was generally expected that Russia’s Post-Communist transformation would make a successful transition to a modern democratic state. These expectations soon faded away, but the need for institutions capable of supporting social and economic development remains urgent. This chapter provides a description of the Public Administration system in the post-Soviet Russia focusing on the political and social aspects of its evolution. 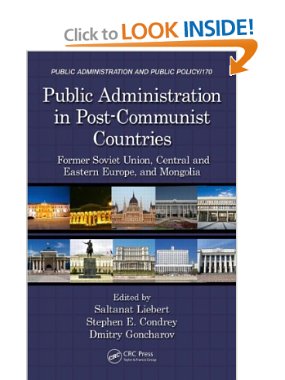 The article is devoted to the principles of licensing procedures’ legal regulation. The interrelationship of these principles with efficiency of public administration is proved. The emphasis is placed on the necessary legalization of the principle of differentiation of the Executive authorities’ permissive powers.

The aim is to identify the most important principles of the licensing procedures’ legal regulation on the base of the analysis of the Russian doctrine, domestic and foreign legislative practice, principles of OECD regulatory policy (OESR), as well as to justify the need to form the value priorities of officials as a basis for the effective use of the administrative procedures’ principles. Analysis of current trends in the processvalidate of public services, the use of general scientific (logical, systemic) and special legal methods (formal-legal, comparative legal) allowed to present the place of the principles of legal regulation of licensing procedures in the public administration system. In the context of the importance of the normative aspect in the legal regulation of the Executive authorities’ permissive activity, the significance of determining the principal approaches to the content of the legislative fixation of the principles of administrative procedures is proved. It is concluded that the most important principle of the licensing procedures’ legal regulation is the principle of differentiation of licensing powers.  Its content is revealed through: 1) reference (correlation) of Federal and regional permissive legislation; 2) clarity in the definition of permissive powers of Executive bodies with different in scope competence blocks (General and special competence); 3) consistency in the implementation of the constitutional provision on the delimitation of subjects of competence between the Russian Federation and its subjects in the "permissive" rules of Federal legislation. It is also suggested that the effect of the principles of administrative procedures is determined not so much by their legalization, but by the formation of the so-called "axiom of legal consciousness" in the subjects of management. It is stated that the principles clearly fixed in the current legislation and mandatory for use in the practice of public administration can project the traditional legal values into the consciousness of the power participants of administrative relations and to form behavioral aspects of regulatory policy in the context of the newly formed concept of public governance in Russia.

The collection  contains scientific articles of the international scientific-practical conference "State Administration and Public Service: Yesterday, Today, Tomorrow in the Context of E-Government and the Digital Economy", held at the Higher School of Public Administration (HSAA) of MV Lomonosov Moscow State University in the framework of the XIV NAUKA Science Festival 0+ (October 11-13, 2019). The materials of the collection reflect the results of research conducted by undergraduates of the first and second courses of the Higher School of Public Administration. This scientific publication will be useful to undergraduate students, undergraduates, researchers, and everyone interested in the current state and development trends of the theory of public service, public administration and management, as well as their practice in modern conditions of digitalization of public life.

Organized in cooperation with the Charles University, Prague and Masaryk University, Brno

Tools of Government for Support of SONPOs in Russia: In Search of Cross-Sector Cooperation in the Delivery of Social Services
Benevolenski V. Public Administration. PA. Высшая школа экономики, 2014. No. WP BRP 17/PA/2014.
This paper discusses the set of tools of government enacted in 2009–2013 in Russia to provide support to socially oriented nonprofit organizations (SONPOs). The discussion evaluates the new tools within the context of international comparisons. In particular the comparisons concern the definition of SONPOs as a subpopulation of the nonprofit sector, the economic dimension of the tool kit and the combination of the support measures as a means to foster cross-sector cooperation in the delivery of social services. Worldwide cross-sector partnership in the delivery of social services is used by governments to engage the resources of civic organizations in the implementation of social policy. NPOs quite readily accept government support and espouse participatory approaches considering such approaches as instrumental in pursuit of their social missions. In Russia this approach is considered a serious policy innovation since government policy to date vis-à-vis the nonprofit sector could be described as either indifferent or predominantly restrictive. The conceptual framework employed for our discussion is based on the explanation of the role played by nonprofit organizations and of the motivation for cooperation between the state and NPOs in the supply of public goods provided by the theory of “market / government / voluntary failure” and on the tools of government approach developed by Salamon. We first consider the legal definition of the subsector of SONPOs, and then investigate the newly introduced tools of government support featuring data on the scope of Russian federal government support for SONPOs. Our discussion focuses on international comparisons, showing substantial similarity to government tool kits employed to support NPOs elsewhere in the world.
On Corruption in Russia
Antonov M. DCPE Online. 2019. Vol. 38. No. 1. P. 216-224.

This paper focuses on the evolution of Russian legislation, political thoughts and public administration as for corruption and anti-corruption measures in the exercise of public functions.

The article is devoted to the theoretical features of innovations in the field of public administration. The subject of the research is the concept of innovation in public administration. The goal is to substantiate the relationship between successful innovation, institutional transformations and their ideological support. The main tasks are a description of the differences in the traditional understanding of the content of innovation and its content in the field of public administration, a description of the factors contributing to or hindering successful innovation in the field in question, an analysis of the relationship between the innovation activity of employees in the public service and institutional transformations. The conclusion is drawn on the importance of the trinity of technological, institutional and ideological innovations in the context of the goals and objectives of national economic development.

The logic of interaction between state authorities and local self-government, in the conditions of constitutionally fixed independence of the branches of government, should be built on cooperation relations. The inter-municipal interactions of the administrations of urban and rural settlements with the regional authorities, since the two-level organization of local self-government is legislatively fixed, suggest, in addition to cooperation relations, also subordination relations. At the same time, the declared principles of openness, transparency and ethics in public administration exclude the building of interactions between authorities of different levels on informal relations.

Using the game-theoretic approach and as the basic model of interaction in a conflict situation, C. Thomas to describe the interaction between the leaders of government bodies of different levels (municipal district - settlement) and different branches (municipal - state power), we identified and described 4 possible types of one-dimensional models of interaction between authorities at different levels. The “normative” model (1) presupposes relations of cooperation as the main and leading in relations between managerial leaders. The "mobilization" model (2) presupposes relations of subordination, primarily between leaders of local and state levels. The “isolationist” model (3) implies a relationship of rivalry. The model (4) of “renunciation of authority” suggests that mutual avoidance is the basis of interactions between leaders. It was expected that the first two models of interactions, as normatively fixed relations of cooperation and subordination, would most closely correspond to the actual practice of interactions between leaders of government bodies. On the contrary, the last two models should have very limited value in management practice.

Real relationships are built on informal relationships using "forbidden" models, since interactions between managers are built primarily around the sharing of limited resources (financial, natural and administrative), which does not imply the principles of openness, transparency and ethics of public administration. In harsh conditions, the optimal interaction strategies for many grassroots leaders are submission or, on the contrary, intense rivalry, and by no means cooperation or avoiding interactions.