The Composition of the Ghent Altarpiece (Divine and Human Perspectives)

An analysis of the Ghent Altarpiece by Jan van Eyck shows that the depicted figures are arranged according to the dualism of earthly versus heavenly space. Two kinds of perspective are presented here: that of an external observer (this perspective virtually corresponds to the point of view of a spectator who is watching the Altarpiece) and that of an internal observer imagined to be within the depicted world (i.e. the Divine perspective). The external perspective is used to represent the earthly space, whereas the internal perspective serves for the representation of the heavenly space. This contraposition of the two opposite points of view is specifically revealed on the opened altar panels in the right-left orientation. In the foreground the more valuable figures are placed on the right while in the middleground the more valuable is placed on the left (from the point of view of a spectator of the Altarpiece). It is argued that in both cases the right side has the priority (is semiotically marked as more important); however in the foreground the organisation of figures is correlated with our point of view (that of the ex­ternal observer who is outside the depicted world) while in the middleground the figures are arranged according to the point of view of an internal observer. The former principle is typical for Renaissance art and the latter one is characteristic for Medieval art, especially for icon-painting. Incidentally it is very clear in the terminology of icon-painters: the right­hand part of the icon was thought as the left (and it was called "left") and, conversely, the left part of the painting was considered to be the right part (and accordingly it was called "right"). In other words the reckoning was not from our point of view but from the point of view of our implicit vis-a-vis. Famous as a protoganist of the Renaissance art, van Eyck actually uses both principles, the Renaissance and the Medieval one: the Renaissance principle is used for representation of the earthly space, the traditional Medieval principle serves for representation of the heavenly space. Indeed the central part of the opened Atarpiece is organized like an icon.

The panels on the closed altar illustrate the dualism between earth and heaven in a different way. In the earthly space, heavenly figures take the form of statues and pictures, whereas in the heavenly space they are alive. At the same time the figures of Archangel Gabriel and the Virgin stylistically correspond to the statues of saints: the same colours are used and their garment is presented as a sculptural relief. The dialogue between the Archangel and the Virgin confirms this complementarity of perspectives: Gabriel’s words address earth and are thus to be read from below; Mary’s words address heaven and their letters therefore appear upside-down to the human observer. The paper concludes with the hypothesis that the opposition between the earthly and the heavenly is not only a principle of composition of the Ghent Altarpiece but also its central theme. 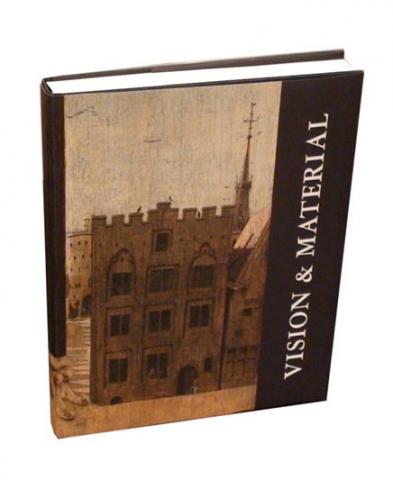 The achievements of Jan Van Eyck coincides with Leon Battista Alberti’s writing of De Pictura (On Painting), a turning point in the history of art. The treatise applies the late medieval science of vision (optics) which Jan van Eyck equally appears acquainted with, but which he pursues in another direction than Alberti. This book contains papers dedicated to the interaction between Art and Science in Jan van Eyck’s Time.  It is based on the conference, organized the Royal Flemish Academy of Belgium in Brussels.

A possible reflection of the painter (Jan van Eyck) in the Ghent Altarpiece
Uspensky B. A. In bk.: Language, Reason and Education. Studies in honor of Eddo Rigotti.. Bern: Peter Lang, 2014. P. 301-311.

The use of reflection as a sign of the painters’ presence seems to be characteristic of Jan van Eyck. We find this in "The Arnolfini Portrait" and also in "The Virgin and Child with Canon Van der Paele". In both cases the painter is outside the represented space but his reflection demonstrates his presence in the real physical space where he is making the picture. These two examples are relatively well-known. The aim of the present paper is to suggest a third example, which till now has never been an object of attention. It seems that one can observe a similar phenomenon in the Ghent Altarpiece, in the scene of the Adoration of the Mystical Lamb. Two figures are reflected on the spherical surface of the Fontaine of Life. Who are these figures? Obviously they do not belong to the depicted scene, they are outside the pictorial space. We can guess that they are a reflection of the master (Jan van Eyck) and his assistance, as in the "Arnolfini Portrait". It is not excluded, however, that the reflection refers to the brothers Jan and Hubert van Eyck.

In the paper an approach to identification of characteristics for assessment of IT strategic decisions is proposed. The main feature of the approach is associated with integration of Balanced Scorecard methodology for IT service (IT Balanced Scorecard) and COBIT standard. Such integration allows to describe a hierarchical structure of characteristics (metrics) for assessment of decisions efficiency in yje field of information technologies.