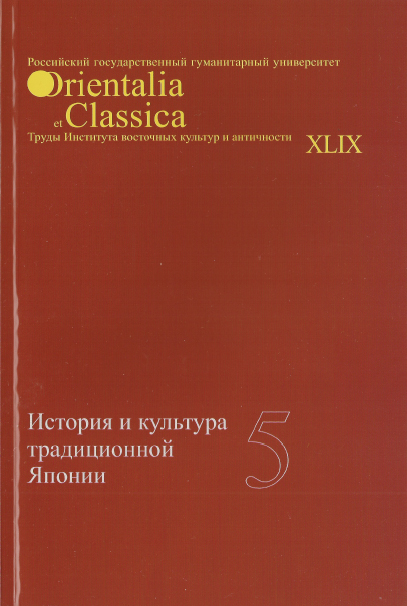 Article focuses on a psychological conceptualization of travelling. Author reveals essential features of the phenomenon and describes specific types of travelling according to interaction between three «worlds»: travelling world, habitual world and inner world of personality.

The article is devoted to a monument of Japanese Medieval literature “Izayoi nikki” written by Nun Abutsu (1221?–1283). This work most likely was gathered and compiled after Abutsu’s death in 1283. Despite the genre designation nikki (日記, “daily recording”, “diary”) Abutsu’s work differs from another traditional diaries by its contents, style, and composition.

“Izayoi nikki” – “The Diary of the Waning Moon” or “The Journal of the Sixteenth-Night Moon" – is not only interesting but also a very important work for the Medieval Japanese literature. First, it is popular among the Japanese, since today this diary is one of the most read works of the Kamakura period. Second, the research of “Izayoi nikki” in context of the diary literature, demonstrates development of a genre nikki. Moreover, the diary consists of about 90 poems, which are the great example of women’s poetry tradition at this time. Finally, the personality of the author herself is very appealing to research deeply. Abutsu was married a famous poet Fujiwara-no Tameie and, more likely, played a key role in dividing the Fujiwara house into three poetic schools (Nijo, Kyogoku and Reizei).

As the last famous work by a woman, as the best known diary or travel account in Japanese written between the twelfth and sixteenth centuries, and as one of the five or six mostly read works of the Kamakura period, the “Izayoi nikki” has an important place in Japanese literature. “Izayoi nikki” gives valuable materials about culture and language of that time and definitely should be interesting for researches devoted to development of diary tradition in Japanese literature.

The images of emperors Tenchi and Temmu as seen in ancient Japanese texts.