The relevance of studying the problems of European security today is largely associated with the changes that have occurred in the world in a quarter of a century after the end of the Cold War and the disappearance of the Yalta-Potsdam system (1945–1991). Are all the constituent elements of a post-bipolar system of collective security being seriously tested today? To answer, it is necessary to consider in detail the changes in the architecture of international security and assess the prospects for its further development, primarily in relation to the macro-region of Greater Europe and the behavior of key European actors. 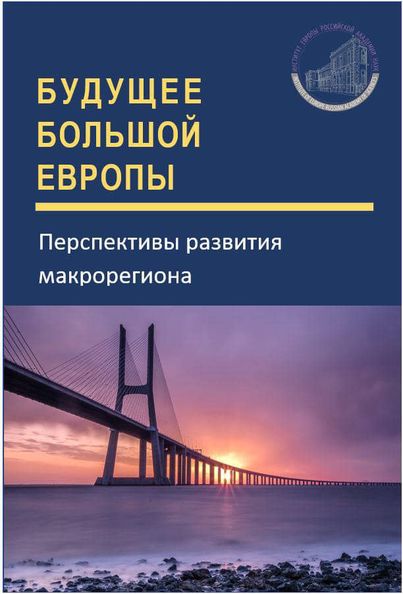 Russian foreign policy today makes accent on developing alternative payment, currency and investments institutions as well as markets free of political, financial and normative control by the West. The West is gradually abandoning the strategy of maintaining global liberal economic order based on US leadership, and instead is consolidating markets around itself, developing its own trade and economic associations. Geographic boundaries of these markets point at the fact that the dominating tendency in the modern world is to develop gigantic regional and quasi global markets on ideological geopolitical principles. In this process we can see the first indications of a new bipolarity, and the visible features of emerging bipolarity are trade and finance. This process has become especially pronounced in the course of the Ukrainian crisis.

Innovations as Public Goods Provision with Negative Externalities: Role of Parliamentarism
Rosenberg D. Political Science. PS. Издательский дом НИУ ВШЭ, 2012. No. 06/PS/2012.
Technological innovations are inherently problematic (risky, uncertain, possess public goods properties (enhances free-riding since it is easy to steal), but once they succeed, they create negative externalities for incumbents in the form of economic resources redistribution. Economic resources are convertible into political power. Therefore, economic redistribution might eventually result in political power redistribution. Those who fear to lose political power have incentives to defend status quo. Innovators will face collective action problems (who will be willing to innovate and risk to fight with incumbents) and commitment problems (who will compensate losers from innovations and why they should believe such promises). My answer is that market is not enough. It is political institutions that solve collective action and commitment problems. Some political institutions e.g. parliamentary government form will deal with political risks better than others e.g. presidential one.
V-Dem Methodology
Coppedge M., Gerring J., Knutsen C. H. et al. Working Paper. V-Dem Institute. V-Dem Institute, 2018
Азоры здесь тихие
Вотановская Е. А. Индекс безопасности. 2012. Т. 15. № 2(89). С. 73-86.

The author looks at the airbase on the (Portugal) as a showcase of America's attitude to its lesser NATO partners, and a demonstration of how an individual nation can use the home field advantage to play with the superpower and a military alliance at its peak in the modern multipolar world.

This comparative study shows how the revival of geopolitics came not despite, but because of, the end of the Cold War. Disoriented in their self-understandings and conception of external role by the events of 1989, many European foreign policy actors used the determinism of geopolitical thought to find their place in world politics quickly. The book develops a constructivist methodology to study causal mechanisms, and its comparative approach allows for a broad assessment of some of the fundamental dynamics of European security.

Institutional Factors of Government Efficiency: Cross-Country Comparative Analysis
Gasparyan O. T. Political Science. PS. Высшая школа экономики, 2014
Government efficiency is one of many fuzzy terms in contemporary political science. Due to its multidimensionality, it is not well-defined and, therefore, hard to identify. The idea of the current research is to create an index of government efficiency using data envelopment analysis. Using a sample of 127 countries for the period of 2009-2011 we then mark out the significant institutional factors that could impact government efficiency. Moreover, this study supports the initial hypothesis about the predominance of political factors in the efficiency increase.