Indo-Uralic and the Origin of Indo-European Ablaut

Following pioneering ideas of Bojan Čop, this paper offers a brief sketch of a theory of the origin of Proto-Indo-European ablaut in the light of Indo-Uralic comparison. Starting from the assumption that Proto-Indo-Uralic phonotactics and morphophonology were essentially preserved in Proto-Uralic, but significantly changed in Proto-Indo-European, we trace the origin of Proto-Indo-European ablaut paradigms (mobile and acrostatic paradigms of root nouns, hysterokinetic, proterokinetic, amphikinetic and acrostatic paradigms of suffixed nouns). Each of these paradigms can be derived by a set of simple rules from the proposed Proto-Indo-Uralic reconstruction that is itself based on the conventional Proto-Uralic reconstruction. 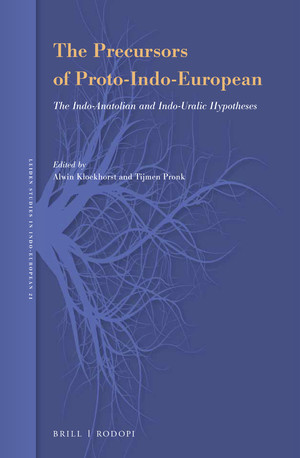 The Precursors of Proto-Indo-European: The Indo-Anatolian and Indo-Uralic Hypotheses
Brill, 2019.
Similar publications
Reflexivity without reflexives?
Volkova A. A., Reuland E. The Linguistic Review. 2014. Vol. 31. No. 3-4. P. 587-633.

What prevents pronominals from being locally bound? Does this a) reflect an intrinsic property of pronominals (Chomsky 1981), is it b) a relative (economy) effect, that only shows up where there is a more dedicated competitor (see from different perspectives, Safir 2004, Boeckx, Hornstein and Nunes 2007, Levinson 2000), does it c) have a semantic basis as in Schlenker (2005), or does it d) follow from general conditions on agree based chains, and reflexive predicates (Reuland 2011a)? To help resolve this issue, we investigate Khanty (Uralic, spoken in Northwest Siberia), a language that is reported to allow locally bound pronom- inals (Nikolaeva 1995), and assess whether it in fact does have them, and, which factors come into play when local binding obtains.

The architecture of reduced relative clauses: evidence from reflexives
Volkova A. A. In bk.: Proceedings of the 47th Annual Meeting of the North East Linguistic Society. Vol. 3. Amherst: GLSA Publ., 2017. P. 189-198.

The syntactic structure of participial relative clauses is often percieved as impoverished, “reduced” in comparison to that of regular RCs (see a. o. Burzio 1981; Hazout 2001; Siloni 1995; Stowell 1981). Participial RCs are often analysed as VP-like structures and typically (i) don’t license CP-material; (ii) don’t have an independent temporal reference; and (iii) don’t have subjects. I discuss the data of Meadow Mari (Uralic) and argue against claims (ii) and (iii) above by showing that Meadow Mari pRCs can have independent temporal reference and subjects.

Acta linguistica petropolitana. Труды института лингвистических исследований, том XI, часть 2
Т. XI. Ч. 2: Языковое разнообразие в Российской Федерации. СПб.: Наука, 2015.
Effort versus performance tradeoff in lemmatisation for Uralic languages
Tyers F. M., Bibaeva M. Proceedings of the Sixth International Workshop on Computational Linguistics of Uralic Languages. 2020.iwclul-1.2. Association for Computational Linguistics, 2020
Lemmatisers in Uralic languages are required for dictionary lookup, an important task for language learners. We explore how to decide which of the rule-based and unsupervised categories is more efficient to invest in. We present a comparison of rule-based and unsupervised lemmatisers, derived from the Giellatekno finite-state morphology project and the Morfessor surface segmenter trained on Wikipedia, respectively. The comparison spanned six Uralic languages, from relatively high-resource (Finnish) to extremely low-resource (Uralic languages of Russia).  Performance is measured by dictionary lookup and vocabulary reduction tasks on the Wikipedia corpora.  Linguistic input was quantified, for rule-based as quantity of source code and state machine complexity, and for unsupervised as the size of the training corpus; these are normalised against Finnish.  Most languages show performance improving with linguistic input.  Future work will produce quantitative estimates for the relationship between corpus size, ruleset size, and lemmatisation performance.
Licensing Reflexivity: Unity and variation among selected Uralic languages
Volkova A. A. Utrecht: LOT, 2014.

This dissertation analyzes the reflexivity patterns in Uralic languages from the point of view of a minimalist approach to binding. The languages under consideration are five Uralic languages spoken in the Russian Federation: Meadow Mari, Komi-Zyrian, Khanty, Besermyan Udmurt, and Erzya. The empirical data were compiled during fieldwork, and are used to test and assess current approaches to binding. The main focus of the dissertation is on a number of puzzles posed by these languages, namely the locally bound pronominals in Khanty, as well as the binding domains of what I call semi-reflexives and their ability to take split antecedents in Meadow Mari, Komi-Zyrian, Besermyan Udmurt, and Erzya. The analysis of reflexive strategies proposed in this dissertation is based on a modular approach  to binding (see Reuland 2011). It disentangles the various factors playing a role in establishing interpretive dependencies, including properties of predicates and syntactic chains. The puzzling behavior of reflexive strategies under discussion is accounted for in terms of their morphosyntactic composition in tandem with general properties of grammatical computation. The present approach provides a unified basis for verbal and nominal reflexives. Overall, the study shows that cross-linguistic variation is not random. It demonstrates how descriptive fieldwork and theoretical research can be mutually beneficial and how their symbiosis deepens our understanding of the general principles underlying language, and the way these are rooted in our cognitive system.

The paper discusses certain aspects of Indo-Uralic reconstruction, focusing on a comparison of our theoretical expectations from the comparison of Indo-European and Uralic basic lexicon with the actual results of lexicostatistical analysis.

Over thirty specialists in Indo-European linguistics have contributed this elegant volume in honor of Prof. Sasha Lubotsky of Leiden University. Besides giving an excellent snapshot of the research currently being undertaken by his students and colleagues at that institution, Farnah contains contributions from well-known scholars across the world covering topics in Tocharian, Germanic, Slavic, Indo-Iranian, and Anatolian linguistics, to name a few.

This paper presents an overview of Hill Mari participles, their verbal and nominal features, temporal characteristics, morphological and syntactic restrictions, and most common syntactic functions. It further describes the participial paradigm in the language and the main oppositions it is based on. Further, it discusses the relativizing capacity of participles and examines the cases of competition between different participial forms as well as the encoding of subjects and direct object in participial clauses.

In this paper we discuss the results of an automated compari-son between two 50-item groups of the most generally stable elements on the so-called Swadesh wordlist as reconstructed for Proto-Indo-European and Proto-Uralic. Two forms are counted as potentially related if their first two consonantal units, transcribed in simplified consonantal class notation (a rough variant of the Levenshtein distance method), match up  with each other. Next to all previous attempts at such a task (Ringe 1998; Oswalt 1998; Kessler & Lehtonen 2006; Kessler 2007), our automated algorithm comes much closer to emu-lating the traditional procedure of cognate search as em-ployed in historical linguistics. “Swadesh slots” for protolan-guages are filled in strict accordance with such principles of reconstruction as topology (taking into consideration the structure of the genealogical tree), morphological transpar-ency, typology of semantic shifts, and areal distribution of particular items. Altogether we have counted 7 pairs where Proto-Indo-European and Proto-Uralic share the same bi-consonantal skeleton (the exact same pairs are regarded as cognates in traditional hypotheses of Indo-Uralic relation-ship). To verify the probability of arriving at such a result by chance we have applied the permutation test, which yielded a positive result: the probability of 7 matched pairs is equal to 1.9% or 0.5%, depending on the constituency of the conso-nantal classes, which is lower than the standard 5% threshold of statistical significance or even lower than the strong 1% level. Standard methodology suggests that we reject the null hypothesis (accidental resemblance) and offer a more plau-sible explanation for the observed similarities. Since the known typology of language contacts does not speak in favor of explaining the observed Indo-Uralic matches as old lexical borrowings, the optimal explanation is seen in the hypothesis of an Indo-Uralic genetic relationship, with the 7 matching pairs in question representing archaic retentions, left over from the original Indo-Uralic protolanguage.

Syntactic structure of participial clauses in Meadow Mari
Volkova A. A. Basic research program. WP BRP. National Research University Higher School of Economics, 2017. No. 54.
It is generally assumed that the syntactic structure of participial relative clauses is impoverished, “reduced” in comparison to that of regular RCs (see a. o. Burzio 1981; Chomsky 1981; Hazout 2001; Siloni 1995; Stowell 1981). Participial RCs are often analysed as VP-like structures (for some, embedded under a nominalizing node, Doron & Reintges 2005; Hazout 2001; Siloni 1995, a. o., but see Kayne 1994 who argues that participial clauses have a C, but crucially not a T). The participial RCs typically (i) don’t license usual CP-material (wh-phrases, complementizers); (ii) don’t have an independent temporal reference; (iii) don’t have subjects. Based on the data of Meadow Mari (Uralic) I contend the two latter statements and show that Meadow Mari pRCs can have independent temporal reference and subjects. I further contrast the behaviour of reflexives in embedded infinitival and participial clauses and argue that even if there is a C level in pRC, it is quite different from that of infinitivals.
Лабильные глаголы в европейских и северокавказских языках. Опыт сравнительного анализа
Летучий А. Б. В кн.: История языка. Типология. Кавказоведение. М.: Наука, 2013. С. 169-212.

In the paper, the classes of labile verbs (verbs which can be transitive or intransitive without any formal changes) are analyzed on the data of European and North Caucasian languages. The main conclusion is that there is a semantic difference between classes of labile verbs in the two language groups under analysis. In European languages, predicates with low semantic transitivity are labile (for instance, motion verbs and phasal verbs), while in Caucasian languages, lability is more characteristic of verbs with high semantic transitivity (verbs of destruction and similar verb classes).