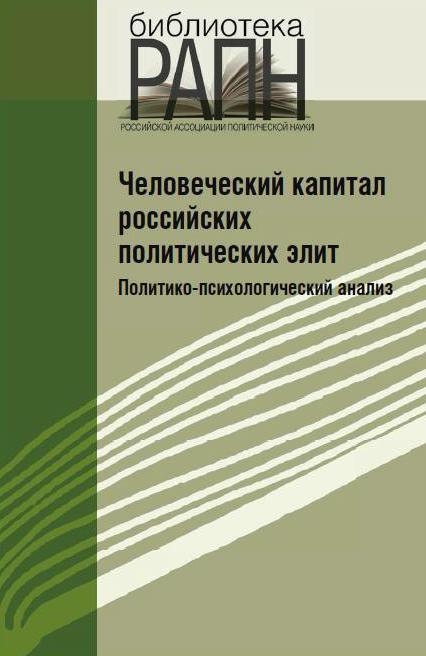 It is for the first time when the phenomenon of the political class is being investigated in the Russian political science literature. In this edition, the political class is viewed as a community of persons professionally involved in the sphere of politics. Political elites, administrative and political bureaucracy, deputy corps, party functionaries, analyst center staff, expert community, political consultants, political journalists are regarded as important segments of the political class.  The study of political participation of corporate business is also paid attention to. An important advantage is the combination of theoretical, methodological and applied aspects of the research, as well as a comparative perspective: the features of the formation of a political class in Ukraine and other countries of Central and Eastern Europe are considered.

Capitalization of Professional Knowledge in Economies with Different Level of Innovation Development
Sirotin V., Arkhipova M., Egorov A. In bk.: Proceedings of the 12th European Conference on Innovation and Entrepreneurship. P.: ACPI, 2017. P. 628-637.

This paper is focused on the problem of aggregate return to education. We consider this factor as an indicator of the professional knowledge capitalization that can be used as a proxy for human capital stock in extended Cobb-Douglas type equation for modeling the economic growth. Identification of the indicator is based on time-series data on countries and regional economies. To divide the objects into groups with respect to the aggregate return to education, we employ the fuzzy classification methodology instead of the traditional clustering procedure. This approach provides more relevant dividing the whole sample into three homogeneous groups. The first group includes the economies with low level of innovation development. These economies have close to zero or negative rate of return to education. The second group is most numerous. It mostly consists of developed economies with moderate aggregate rate of return to education. The third group includes objects with high return to education. It turned out that they are predominantly emerging economies developing on the base of new technologies. Such a typology provides the opportunities to make some suggestions concerning the relation between innovation development and quality of human capital stock. In particular, high rate of return to education in emerging economies we explain by the excess demand on high-qualified staff on the labor market that cannot be fully satisfied by existing educational system in the economies with higher level of innovation potential. Conversely, in developed economies, educational system meets the demand of the labor market, so the aggregate return to education is not so high. So it is necessary to be more specific about the structure of educational system for preparing high qualified staff for the most promising directions of innovation development. Comprehensive research of the considered problem at the regional level requires more elaborated data sources.

Since 1987, a multitude of studies referring to the Schwartz (1992) structural model of human values have been published. Although most studies support this conceptual approach, few were based on representative samples. The implementation of the biennial European Social Survey (ESS) in 2002, made responses from 71 representative national samples from 32 countries to a 21-item version of the Portrait Values Questionnaire available for assessing this model of human values. We present structural analyses of these data using a theory-based approach to multidimensional scaling (Bilsky, Gollan & Döring, 2008) that can be applied to optimally assess the fit of data to diverse theories. The analyses support the circular structure of basic values across countries and within countries across time. They also replicate two findings based on other samples, surveys, and methods of analysis (Fontaine et al., 2008): Deviations from the structure are fewer and the contrast between protection and growth values is sharper in more developed societies

The article discusses different approaches to the “human capital” interpretation. The interconnection between “human capital” and “career” is specified. Profound analyses and interpretation of empiric material is proposed. Taking into account the interpretation there is a conclusion that studying in specialized classes and a “knowledge aspect” of the human capital with high school students aren’t directly connected: both students of the non-major and specialized classes don’t really think seriously about building their career in future. The human capital being figured out through the USE credits doesn’t depend on a students’ aspiration to build either vertical or a horizontal career.

The purpose of this paper is to focus on one of the major emerging Asian economies – India – to examine the role of human capital in asset prices.

The present paper is aimed at considering the evolution of human capital theory. Drawing on the wide range of classical and recent studies, the author shows the link between changes in economies of industrially developed countries and the development of the human capital theory revealed in the expanded list of indicators measuring human capital. The author proposes a periodization of the human capital theory suggesting 5 phases: (1) the pre-industrial phase (up to the seventeenth century); (2) the phase of mass education (the nineteenth through the rst half of the twentieth century); (3) the late industrial period (1960s–1970s, the period when the core of the human capital theory was established); (4) the post-industrial period I (1980s–2000s); and (5) the post-industrial stage II or contemporary period (2000s–2010s). The study reassesses narrow interpretations, which still widely exist among applied economists. Based on the findings of the human development studies, the author argues for a broader list of indicators of human capital, and, specifically, considers human capital through the lens of national development; moreover, this coincides with the core of the given theory. It is shown that the traditional interpretation of human capital, known as years of schooling and training, does not represent the current situation in the economy, and can be extremely harmful to society if it is adopted as the basis of public policy oriented to the formation and growth of society. The present study can be useful to both economists and sociologists focusing on the indicators of human capital and its contribution to the socioeconomic development of a modern society.

Training Strategies and Skill Development Amid Weak Institutions: Evidence from Russia
Marques II I. Political Science. PS. Высшая школа экономики, 2017. No. WP BRP 52/PS/2017.
How do firms decide between different strategies for acquiring highly skilled workers? Ronald Coase (1937) famously argued that firms face trade-offs between “making” required inputs within the firm and contracting with outside actors to “buy” them. Similar trade-offs abound in deciding between in-plant training and outsourcing to either public or private, third parties. Existing theory on firms’ training strategies is premised on the ability of firms to solve a fundamental commitment problem, which retards cooperation between firms and other actors. Only with a strong civil society – employers’ associations and labor unions –or free, transparent and efficient market mechanisms is cooperation possible. Contemporary Russia presents a puzzle to this work. On the one hand, firms increasingly make costly co-investments with state-run schools and outsource training to private third-parties. On the other hand, civil society and judicial institutions are weak in Russia, making it difficult for firms to punish counterparties, at the same time that its markets have failed to fully make the transition to free and transparent capitalism. This paper argues that absent strong civil society and free, transparent markets, firms can overcome commitment problems and work with third-parties so long as their regional governments have strong state capacity and are politically accountable. The former assures firms that central, regional authorities can monitor school officials and private-third parties to ensure agreements are honored, while the latter creates incentives for regional authorities to do so. These theories are tested on original survey data covering 690 firms in 12 Russian regions.
Эвристический потенциал теорий элит в изучении человеческого капитала
Гаман-Голутвина О. В. В кн.: Человеческий капитал российских политических элит: Политико-психологический анализ. М.: РОССПЭН, 2012.

Interregional Mobility Of Russian Researchers: Moving For A Promising Job
Volkova G., Никишин Е. А. Basic research program. WP BRP. National Research University Higher School of Economics, 2019. No. 103.
Mobility of highly qualified personnel between countries and regions is closely related to the issue of the effective distribution of human resources and the prospects for the innovative development of the state. The focus of this study is the interregional mobility of Russian researchers: the geographical movements of scientists between different regions (subjects of the Russian Federation). The empirical base of the study is the data obtained in 2016-2017 during the questionnaire survey of 1880 Russian researchers. Two main aspects are analyzed: already accomplished movements of researchers (moving for the educational or working purposes) and the “attitude to mobility” - readiness to move in the future. The features of researchers depending on their mobility pattern are analyzed. Among the most researchers who had the experience of moving in the past (both for education and work purposes) develops the “attitude to mobility”. In the future, they are more willing to consider various options for moving both “for interest” (to participate in an important large-scale project), and “for money” (to get the job with acceptable level of remuneration). There exists a category of Russian researchers who are ready to move “anywhere”: both abroad and within Russia, to large and to small cities. Researchers who are not ready to move to the place that they consider as a small town in a remote region, are concerned about the prospects for professional growth, difficulties for the family, a different lifestyle, change of professional and personal social circle. These aspects should be taken into account in the development of various programs and measures aimed to stimulate internal academic mobility in Russia.
Minorities, Human Capital and Long-Run Development: Persistence of Armenian and Greek Influence in Turkey
Gokmen G. CESifo Working Paper. CESifo Working Paper No. 6268 (December 2016). ifo Institute, Center for Economic Studies, 2016
We study the long-term economic legacy of highly-skilled minorities a century after their wholesale expulsion. Using mass expulsions of Armenian and Greek communities of the Ottoman Empire in the early 20th century as a unique natural experiment of history, we show that districts with greater presence of Armenian and Greek minorities at the end of the 19th century are systematically more densely populated, more urbanized, and more developed today. Results are robust to accounting for an extensive set of geographical and historical factors of development and minority settlement patterns. Matching type estimators, instrumental variable regressions, and a sub-province level case study corroborate our findings. Importantly, we provide evidence on the channels of persistence. Armenian and Greek contribution to long-run development is largely mediated by their legacy on local human capital accumulation. In comparison, the mediating effect of minority asset transfer on development appears less important.