In this chapter we explore the higher education institutional landscape taking the case of the largest post-Soviet higher education system: Russia. In the Post-Soviet period, Russian higher education has tremendously expanded. The dramatic growth of the number of students and institutions has been facilitated by the introduction of tuition fees in public and a new private sector. The shifts in social and economic demand for professional fields affected the disciplinary and organisational structure of higher educational institutions. 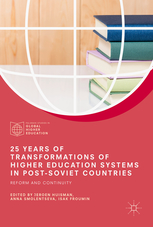