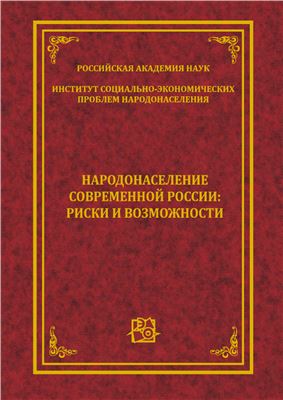 Народонаселение современной России: риски и возможности
М.: Экономическое обозрение, 2013.
Similar publications
Родительство в современной России: политика государства и гражданские инициативы
Чернова Ж. В. Мониторинг общественного мнения: Экономические и социальные перемены. 2013. № 1. С. 51-61.
Money management in russian families
Ibragimova D. Sociology. SOC. Высшая школа экономики, 2012. No. 11.
This paper reports the findings of an all-Russian cross-sectional representative survey (N=1600) that was carried out by HSE in 2011. It investigates money management in Russian families. Pooling is the most common money management style, however, the choice of budget management system does not fully account for financial control and power in the household. The regression results show that main determinants for choosing a budget management system are per capita household income, respondents’ gender, wives’ education, marital age, and the budget management system in the parental family. Moreover, the interaction between the parental budget management system and current practice of budgeting in the respondent's family varies between men and women. Among those respondents who repeat the budget management system in their parents family men are more likely to choose the male dominated system, while women are more likely to choose the female dominated system, or pooling system.
Семья в современном коммуникативном обществе: на примере немецкого опыта
Шпилев Д. А. В кн.: Коммуникативистика XXI века: человек в современном мире коммуникаций: материалы VII Всероссийской научно-практической конференции 20 апреля 2011 г.. Н. Новгород: Издательство НИСОЦ, 2011. С. 162-170.
Комментарий к статьям 143–157 Уголовного кодекса РФ
Козлов А. В. В кн.: Комментарий к Уголовному кодексу Российской Федерации. М.: Юрайт, 2011. С. 479-517.
Representation of Family Policy in Russian Printed Media with Different Political Orientation: Pro-Natalist Turn of 2006
Kim N. Social Science Research Network. Social Science Research Network. SSRN, 2016
Mass media is stated as extremely powerful when it comes to the impact of any social or political influence ingeneral and family policy implementation in particular. The majority of researchers consider the influence ofmedia product presenting state family policy on the audience and do not consider how mass media change their information product themselves under the external influence of the state family policy. In this paper we make an attempt to evaluate the changes in family theme, represented on the pages of six state-owned and private Russian printed mass media with different political orientation from 2000 to 2015. In this study the year 2006 is chosen as a landmark year. Russian state family policy after receiving independence in 1996, ten years later in 2006 became to be considered as pro-natalist, with explicit pro-natalist actions of the state inrelation to family. Demographic topics received special weight in political rhetoric, and most of the discussion was made to encourage birth of the second and subsequent children. 720 selected articles from newspapers were subjected to the quantitative content analysis. The results showed that Russian printed mass media, without respect of the political orientation, after 2006 broadcast regulatory model of the family, designed to solve the demographic problem and increase birth rates
Взаимодействие современной семьи с институтами общества в процессе формирования человеческого капитала
Кучмаева О. В. В кн.: Роль семьи в формировании человеческого капитала в инновационной экономике. М.: МЭСИ, 2013. Гл. 10. С. 80-97.
In Chapter discussed areas of cooperation between the institution of the family and other institutions of society in the process of socialization of children with account of redistribution of functions of social institutions (family, government, education, labour market Church). Accentuation the role of the family in the process of socialization. The processes of interaction are considered in the context of transformation of the institution of the family. The conclusions about the prospects of cooperation areas of family and educational institutions in the context of children's socialization.
История женщин на Западе: Парадоксы эпохи Возрождения и Просвещения
Edited by: Н. Земон Дэвис, А. Фарж Т. 3. СПб.: Алетейя, 2008.
Consumer Search Markets with Costly Second Visits
Parakhonyak A. N., Janssen M. C. Vienna Economics Papers. D11. University of Vienna, 2011. No. 1102.