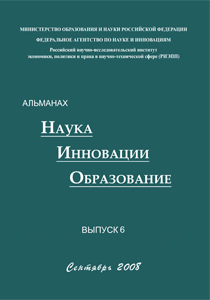 Long-Term Science and Technology Policy – Russian priorities for 2030
Sokolov A., Chulok A., Mesropyan V. R. Science, Technology and Innovation. WP BRP. Высшая школа экономики, 2013. No. 19/STI/2013.
Currently the framework conditions for science and technology and innovation (STI) policy have changed significantly in Russia: a system of technology forecasting has been established, which focuses on ensuring the future needs of the manufacturing sector of the national economy. This system was supposed to be the main part of the state strategy planning system which is currently being formed. Over the last decade dozens of science and technology forward-looking projects have been implemented, among which 3 cycles of long-term S&T Foresight stand out prominently. The Foresight was developed by the request of the Ministry of Education and Science of the Russian Federation. The development of the 3rd cycle of long-term Foresight includes both normative («market pull») and research («technology push») approaches. The project involved more than 2,000 experts and more than 200 organizations. Within the project a network of six sectoral Foresight centers was created on the basis of leading universities. The article describes the most important issues of future studies in Russia and presents the principles which formed the basis for the long-term science and technology (S&T) Foresight until 2030. The authors explore its position in the national technology Foresight system and the possibilities for the implementation of its results by the key stakeholders of the national innovation system and on the level of STI policy. Eventually Russian experience could be fairly interesting and useful for many other countries with similar socio-economic features and barriers
Экспликация «зонтичных брендов» - как способ обнаружения латентных механизмов управления в создании инновационных кластеров
Градосельская Г. В., Просянюк Д. В. В кн.: . С. 416-431.
Инновационная деятельность учащейся молодежи
Митрофанов С. А., Митрофанов А. С. М.: РГУИТП, 2011.
Организация инновационной деятельности в АПК
Нечаев В. И., Боговиз А. В., Бирман В. Ф. и др. М.: КолосС, 2012.
Анализ данных науки, образования и инновационной деятельности с использованием методов анализа паттернов
Алескеров Ф. Т., Гохберг Л. М., Егорова Л. Г. и др. Математические методы анализа решений в экономике, бизнесе и политике. WP7. Высшая школа экономики, 2012. № 07.
Analysis of the science, education and innovation data is very difficult and complex problem. In this paper we describe the method of pattern analysis and the results of its application to the problem of analyzing the development of science, education and the success of innovative activity in the regions of the Russian Federation. In this study we examined characteristics of the regions of Russia such as the level of socio-economic conditions and the potential and efficiency of science, education and innovation from 2007 to 2010. Also we obtain a classification of regions by the similarity of the internal structure of these indicators, constructed trajectories of regional development over time, and found groups of regions carring out similar strategies.