by year
Subject
News
Why Understanding of Texts Worsens with Age
Psycholinguists from the Centre for Language and Brain, HSE University, have found that to predict semantic relations between words when reading, older adults use their knowledge of the world instead of grammar more often than young adults. Reliance on the meaning of individual words instead of accurate grammar analysis allows for faster information processing, but sometimes causes misinterpretations. The study has been published by the Quarterly Journal of Experimental Psychology.
Seven Days Until eSTARS 2021 International Academic Conference
On December 1st and 2nd, 2021, the eLearning Stakeholders and Researchers Summit (eSTARS 2021), an international online conference organized by HSE University in partnership with Coursera, will take place. eSTARS will discuss pressing issues facing universities today in the context of the growing interdependence of digital technology, the economy and education.
HSE University to Host FIT-M 2021 International Scientific Forum
On December 16–18, the FIT-M 2021 International Scientific Forum on the Application of Information Technologies and Computer Simulation in Scientific Research and Engineering and Industrial Business will be held at HSE University. The forum will have a mixed format, with events taking place both offline and online.
Publications
Author:
Campus:
Any
Moscow
Saint Petersburg
Nizhny Novgorod
Perm
Sub-department:
Keywords:
Subject:
Priority areas:
▼
Language:
▼
russian  english
Year:
2022
1958
Add a filter
Of all publications in the section: 8
Sort:
by name
by year 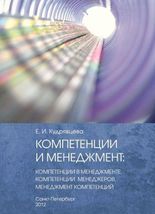 The tutorial discusses the practical computer analysis in the solution of problems in financial management topics . Included guidelines for the quantitative description of the planning system in financial management. An overview of key categories and provisions for asset management and capital. Revealed theoretical issues related to investment management . The material in this manual has a scientific and practical character and contains the information about the typical problems of financial management , which will be in demand by readers directly in research and professional activities.   The manual is intended for students and undergraduates enrolled in the direction of "Economics" and "Management" , and may also be useful to managers and professionals , both financial and non-financial corporations. 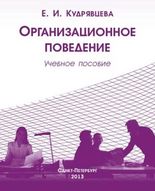 Book
Организационное поведение. Учебное пособие
Кудрявцева Е. И. СПб.: Издательство СЗИУ РАНХиГС, 2013.
Organizational behavior: The manual The manual reveals topical problems of analysis and evaluation of organizational behavior, methods of its correction and development. The methodology of the study of organizational behavior and the evaluation of the most significant concepts are a key subjects for discuss. Specify the source, which first published the most important ideas of the authors who have made the greatest contribution to the development of ideas about the behavior of people in organizations. The manual provided with questions for self-knowledge and reference lists of relevant literature of each chapter.

The volume also examines such issues as the role of «transnational intellectuals» in overcoming of the xenophobia and images of «political enemy», it focuses on the evolution of the phenomena of cosmopolitanism, patriotism and nationalism under the globalization, the intellectual practices of desecuritization of political discourse. The author researches formation of flexible transnational identities and transnational epistemic communities as means to overcome the crisis of multiculturalism. In a comparative historical perspective and in the dialogue between Russian, European and American authors, the book offers a case study of political ideas by S. Frank, M. Mamardashvili, M. Epstein and several other thinkers whose works can be regarded as contributions to the emergence of transnational intellectual cooperation in the 20th century.

The monograph may be of interest to students in the field of political theory, international relations and philosophy, as well as a wide range of readers interested in the problem of the construction of political identities in the era of globalization.

The main purpose of the monograph is to present an innovative assessment tools in the implementation of customer-oriented banking. To do this, in this paper we study the theory of the formation of the valuation of the effectiveness of management of the corporate client in terms of interaction with the investment bank. The theoretical and methodological bases and conceptual modeling unit investment activity aimed at identifying reliable potential borrower from the bank . A new planning tool developed based on the regression analysis of indicators of the bank's cooperation with corporate clients and macroeconomic data. The developed model can serve as an element of the overall management of bank liquidity . Publication addressed a wide range of readers interested in the problems of client banking. Work will be useful for scientific , primarily economic community for students, faculty and graduate students of economic universities and faculties, for those readers who are interested in banking processes aimed at identifying the needs of corporate clients.