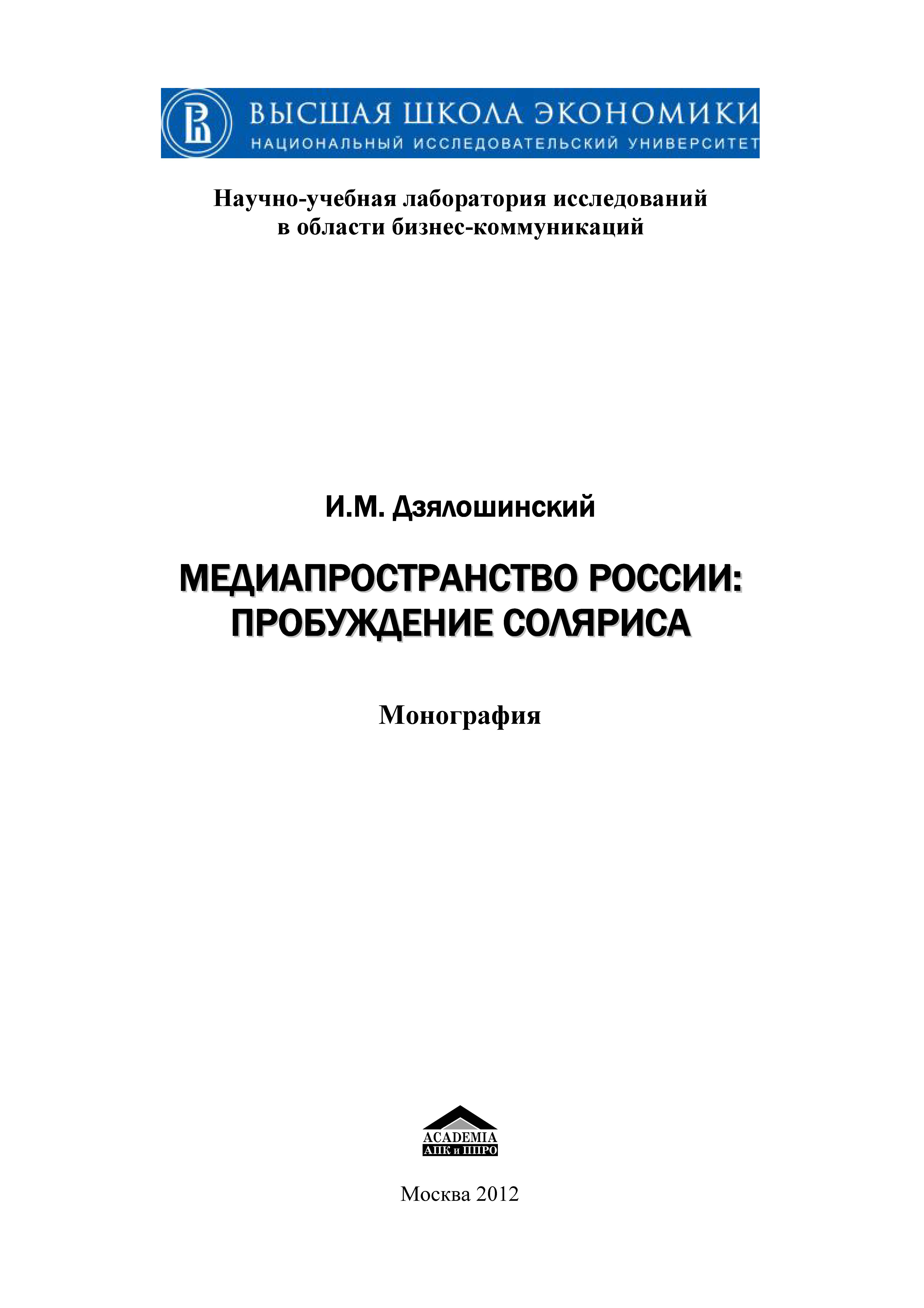 The first in-depth analysis of media &cosmopolitanism that engages critically with existing theories and addresses new case studies in order to question the tendency of a number of scholars to reproduce the fallacies of globalisation research by viewing the relationship between cosmopolitanism and media from an almost exclusive Western perspective;

Mediascapes of Memory: Popular Discussions about History on Russian Social Media Sites
Makhov A. Working Papers of Humanities. WP. ÐÐ·Ð´Ð°ÑÐµÐ»ÑÑÐºÐ¸Ð¹ Ð´Ð¾Ð¼ ÐÐÐ£ ÐÐ¨Ð­, 2016. No. В печати.
The article explores ways of talking about history on different online media sites. Exploring people’s online talks about history I discovered a profound difference in ways of shaping the past in diverse media spaces: Users of Vkontakte, LiveJournal and Ekaterinburg online forum talk about history differently. However the ways of discussing history online are affected not only by the specifics of media (as it was discovered in previous scholarships on memory and media). It depends in a great degree on the social context of media on its level of publicity, established norms, embedment in people’s everyday life.
The Culture of Subversion and Russian Media Landscape
Kiriya I. International Journal of Communication. 2012. No. 6. P. 446-466.

This paper provides a conceptual framework for analyzing parallel (or subversive) media activities in Russia that enable Russian media consumers to act independently from official institutionalized sets of rules and constantly violate both traditional rules (based on great state pressure on content) and the globalized capitalist media economy based on commercial interests. These alternative sets of activities can be interpreted either like an entire parallel public sphere where alternative debate is articulated, or like separate parallel activities recompensing supply and demand failures. Two hypotheses are posed by author. The first states that accessibility of media production in general in Russia is a key element of a contemporary social contract. The second hypothesis relates parallel media practices with certain acts of political activism among narrow groups of the population that could not find places for self-expression in the institutionalized media field and use alternative media outlets (especially blogs and another new media) that ultimately constitute the parallel public sphere.

«Hieroglyphs of protest»: Internet Memes and Protest Movement in Russia
Shomova S. Political Science. PS. Высшая школа экономики, 2019. No. 68.
Political Internet meme is an underresearched contemporary phenomenon situated at the interface of digital media and political communication. Regarded as a unit of online transmission of cultural information, such a meme can be considered, on the on hand, as a manifestation of post-folklore, and on the other hand, as a mechanism of political participation and construction of social media users’ collective identity. The article presents the results of investigation into Internet memes generated by protest discourse in Runet (Russian Internet). Examination of a vast amount of Internet content allows drawing conclusions as to the thematic emphases of protest actions represented in Runet’s memosphere and to the specifics of the image of Russian protest as reflected in memes.
eflecting on Social Smart Cities. Plymouth : Plymouth University, 2015.
Edited by: K. S. Willis, A. Aurigi, M. Philips et al. School of Architecture, Design & Environment, Plymouth University, 2015.

The development of local media products gives citizens a chance to struggle for the city. In some cases, it means literally to appropriate urban space and to maintain control over it within the game (“Ingress the Game”). In other cases, it refers to attempts to produce a legitimate language of urban descriptions within the district blog (“Local blogs”). We distinguish different media formats containing the specific organization of citizens’ participation in urban life and analyze their initial goals and failures. Reflecting upon some of the ways how everyday life practices, an imaginary dimension of the city and technical issues of communication are linked together, we conclude that new media are as a simulator of more complex social interactions. The “Local blogs” project provides the communication platform that lacks the mechanism of self-presentation and has too many alternatives in field of social networks. Meantime the foolproof gameplay of Ingress integrated with other services and networks tends to overcome the simplified idea of competition and appropriation for constructing more advanced urban descriptions of a consolidated game community.

The article focuses on the new understanding in the system of international relations of mass media as the independent actors of world politics possessing its own soft power and the ability to influence soft power by other actors.

Новые медиа в гуманитарном образовании: Электронный сборник статей к научно-практической конференции
Edited by: М. С. Корнев М.: 2013.
Coverage of Three Tragedies in the Russian Media: Application of the Network Agenda Model
Kazun A. D., Kazun A. Political Science. PS. Высшая школа экономики, 2017. No. WP BRP 48/PS/2017.
December 19, 2016, saw three tragedies simultaneously, that could not go unnoticed by the Russian media: dozens of people died as a result of a surrogate alcohol poisoning in Irkutsk, a Russian ambassador was killed in Turkey, and a terrorist attack took place at the Christmas market in Berlin. In this article using the network agenda theory we analyze how these tragedies were covered by various types of mass media: on 11 federal TV channels, in 1,974 print newspapers, in 34,905 online newspapers and 2,574 blogs. We believe that direct and indirect control of the agenda by the state can be exercised by creating a network of events that will canalize correctly discussions about tragedies. We showed that ties between the tragedy and a network of other acute issues are more important than objective circumstances, such as the number of victims or a geography of the event. The context in which the events were looked at led to greater attention to the killing of the ambassador and less attention to surrogate alcohol poisoning. The Russian mass media paid significantly less attention to the Berlin terror attack, it yet was used as a supplement to the demonstration of importance of the fight against terrorism.
Constructing Identities And Boundaries: Fashion And Clothing Of Working And Middle Class Youth In Contemporary Russia
Margarita Kuleva. Humanities. HUM. Basic Research Programme, 2015. No. 85.
Clothing and fashion play significant role in the process of ageing, and help put bodily experiences in the context of culture. It is especially important for young people as social subjects, who are starting to become independent but do not have sufficient experience and social competences to do this.    This paper explores how youth of middle and working class in Russia use clothing to denote their social identity and construct boundaries.The paper is based on materials of 81 IDI with young people from St. Petersburg.
Развитие современного информационного пространства: анализ и перспективы
Дзялошинский И. М., Пильгун М. А., Тощева А. В. и др. Вып. 11. М.: АПК и ППРО, 2012.
Эффективные стратегии и тактики в современных коммуникационных процессах
Edited by: М. А. Пильгун Вып. 10. М.: АПК и ППРО, 2012.
Наблюдения над палеографией византийских надписей Северного Причерноморья
Виноградов А. Ю. Вестник древней истории. 2012. № 1. С. 182-195.
Этические проблемы организационной, профессиональной и межличностной коммуникации
Edited by: М. А. Пильгун Вып. 12. М.: АПК и ППРО, 2012.
Два отечественных введения в агиографию [Никулина Е. Н. Агиология. Курс лекций. М.: Изд-во ПСТГУ, 2008; Лурье В. М. Введение в критическую агиографию. СПб.: Аксиома, 2009] (рецензия)
Виноградов А. Ю. Богословские труды. 2012. № 43-44. С. 594-621.
Ценности культуры и имплицитные теории инновативности
Лебедева Н. М. Общественные науки и современность. 2012. № 5. С. 25-40.