Recommender systems are becoming an inseparable part of many modern Internet web sites and web shops. The quality of recommendations made may significantly influence the browsing experience of the user and revenues made by web site owners. Developers can choose between a variety of recommender algorithms; unfortunately no general scheme exists for evaluation of their recall and precision. In this chapter, the authors propose a method based on cross-validation for diagnosing the strengths and weaknesses of recommender algorithms. The method not only splits initial data into a training and test subsets, but also splits the attribute set into a hidden and visible part. Experiments were performed on a user-based and item-based recommender algorithm. These algorithms were applied to the MovieLens dataset, and the authors found classical user-based methods perform better in terms of recall and precision. 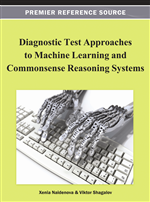 A genetic algorithm for autonomous navigation in partially observable domain
Maxim Borisyak, Ustyuzhanin A. arxiv :: cs :: Cornell University. arxiv :: cs :: Cornell University. Cornell University, 2015
The problem of autonomous navigation is one of the basic problems for robotics. Although, in general, it may be challenging when an autonomous vehicle is placed into partially observable domain. In this paper we consider simplistic environment model and introduce a navigation algorithm based on Learning Classifier System.
Improving prediction of stock market indices by analyzing the psychological states of Twitter users.
Porshnev A., Redkin I. E., Shevchenko A. V. Economics/EC. WP BRP. Высшая школа экономики, 2013. No. 22.
In our paper, we analyze the possibility of improving the prediction of stock market indicators by conducting a sentiment analysis of Twitter posts. We use a dictionary-based approach for sentiment analysis, which allows us to distinguish eight basic emotions in the tweets of users. We compare the results of applying the Support Vector Machine algorithm trained on three sets of data: historical data, historical and “Worry”, “Fear”, “Hope” words count data, historical data and data on the present eight categories of emotions. Our results suggest that the Twitter sentiment analysis data provides additional information and improves prediction as compared to a model based solely on information on previous shifts in stock indicators.
Regression Tree Model for Analysis of Demand with Heterogeneity and Censorship
Ozhegov E. M., Ozhegova A. Economics/EC. WP BRP. Высшая школа экономики, 2017. No. WP BRP 174/EC/2017.
In this research we analyze new approach for prediction of demand. In the studied market of  performing arts the observed demand is limited by capacity of the house. Then one needs to account for demand censorhip to obtain unbiased estimates of demand funnction parameters. The presence of consumer segments with dierent purposes of going to the theatre and willingness-to-pay for performance and ticket characteristics causes a heterogeneity in theatre demand. We propose an estimator for prediction of demand that accounts for both demand censorhip and preferences heterogeneity. The estimator is based on the idea of classiffication and regression trees and bagging prediction aggregation extended for prediction of censored data. Our algorithm predicts and combines predictions for both discrete and continuous parts of censored data.We show that our estimator performs better in terms of prediction accuracy compared with estimators which accounts either for censorship, or heterogeneity only. The proposed approach is helpful for finding product segments and optimal price setting.
Dynamics of Information Systems: Algorithmic Approaches
Edited by: A. Sorokin, P. M. Pardalos. Vol. 51. NY: Springer, 2013.

Concept Relation Discovery and Innovation Enabling Technology (CORDIET), is a toolbox for gaining new knowledge from unstructured text data. At the core of CORDIET is the C-K theory which captures the essential elements of innovation. The tool uses Formal Concept Analysis (FCA), Emergent Self Organizing Maps (ESOM) and Hidden Markov Models (HMM) as main artifacts in the analysis process. The user can define temporal, text mining and compound attributes. The text mining attributes are used to analyze the unstructured text in documents, the temporal attributes use these document’s timestamps for analysis. The compound attributes are XML rules based on text mining and temporal attributes. The user can cluster objects with object-cluster rules and can chop the data in pieces with segmentation rules. The artifacts are optimized for efficient data analysis; object labels in the FCA lattice and ESOM map contain an URL on which the user can click to open the selected document.

In this paper some of the task assignment methods and approaches are examined. The analysis of the algorithms considered is showing their strengths and weaknesses. Also, the ways of further research are presented, which aims to develop a methodology for task assignment in project management area.