This collection of documents is the continuation of the publication “Russia and Africa. Documents
and Materials. From the 18th century to 1960”. (two vols, 1999). It contains previously unpublished
and mostly unknown documents about ties and relations between the USSR and the countries of sub–
Saharan Africa from 1961 to the early 1970s. The originals are housed in several Russian archives: Archive
of Foreign Policy of the Russian Federation, Russian State Archive of Contemporary History, State Archive
of the Russian Federation and State Archive of Sverdlovsk Region. The documents shed new light on the
establishment of diplomatic relations, the development of economic, political and cultural ties between
the USSR and African countries, on the emergence of mutual images and on Soviet aid to the liberation
movements in Southern Africa.
The publication consists of several parts: general documents which characterize the main directions of
interaction between the USSR and Africa and the Soviet vision of the situation in Africa; Africans in Russia
and Russians in Africa; mutual images; and, finally, documents on certain African countries and regions.
The collection covers the countries which the USSR considered most important, and the problems which
were most typical for and characteristic of the relations between the USSR and African states.
This collection is compiled for the use of researchers, university lecturers and students and of all
those who are interested in the history of Africa and of its relations with Russia. 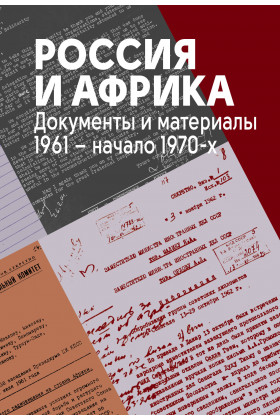